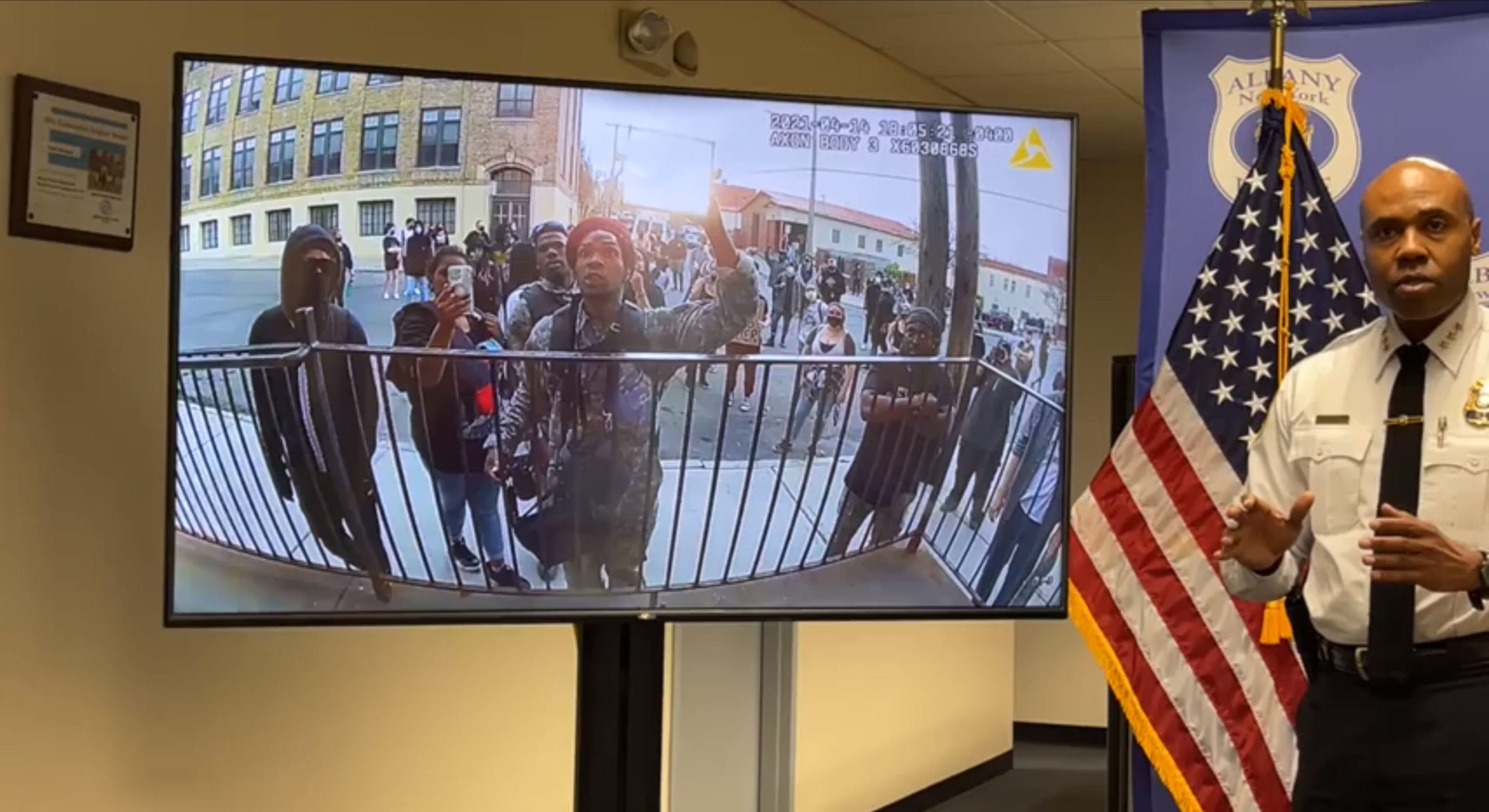 Albany Police Chief Eric Hawkins and Mayor Kathy Sheehan vehemently defended the pepper-spraying of protesters outside South Station — including on a 14-year-old girl.

“What we saw Wednesday evening was not a peaceful protest. It was a riot,” Hawkins said during a press conference on Friday. “It was a planned, premeditated, calculated effort on the part of individuals to attack police officers and police property.”

During the press conference Chief Hawkins showed incomplete and spliced surveillance and body-worn camera footage. At multiple points, Hawkins pauses the video to stress to reporters that what they were watching was in no way the result of his officer’s actions. However, livestreams taken from the perspective of protesters show a different side:

The body-worn camera footage of Lt. Devin Anderson is muted when he is seen on bystander video exchanging words with protesters before officers retreat into the station. The Chief then switches to an exterior camera where the front doors are not visible. The Chief commends Anderson for recognizing that their presence could escalate the situation.

However, footage obtained by Albany Proper shows that it did not end there — after retreating inside Anderson reopens the door to initiate physical force with a protester holding a LED light, the first moment that escalates into the kicking of the door and cracking of a window. Anderson is the same officer that is later seen forcefully ripping away an activist’s megaphone. That person, Chandler Hickenbottom, has said she was injured as a result of that force.

Hawkins defended the officer’s actions with the megaphone, which he labeled as “a threat.” He spoke about the need for officers to hear their radios, but the video appears to show multiple other protesters with the same style of megaphone.

Hawkins called the LED a “high intensity light” that can “cause damage to our officers.” The light in question was a Neewer 480 LED light that is typically marketed as a consumer-level video interview light.

According to James Peterson, a Troy-based engineer who made Forbes 30 Under 30 list for his LED research, these light panels produce considerably less candela, a base unit for luminous intensity, than the average police flashlight. That particular LED panel has 3,360 candela, while Maglite’s top selling “Police and Security” flashlight has 65,407 candela and the pocket-sized Mini Maglite has 8,148 candela.

The Albany Police have used their own LED spotlights for crowd control in the past. Last summer, a bright spotlight from the top of the department’s military vehicle was used against Black Lives Matter protesters who were getting tear-gassed outside the same South Station.

Meanwhile, Mayor Sheehan criticized media coverage of the protest and categorized livestream videos as untruthful, despite the major social justice movements born out of bystander video that have often contradicted official police accounts — including in the case of George Floyd. Sheehan’s office hung a Black Lives Matter banner across City Hall after Floyd’s death.

Both the Mayor and the Chief became visibly upset when they spoke about the emotionally charged and vulgar language used by protesters towards the police but reiterated the city’s commitment to protecting the rights of protesters.

According to the ACLU, “the First Amendment to the Constitution protects speech no matter how offensive its content.”

In response to the press conference, protesters who had been outside the South Station expressed their frustration with the narrative presented and the unwillingness to change.

“The moral of the story is that we’re done playing games with people. Nothing is changing,” said Andre Simmons. “Albany South Station didn’t listen to us. They disrespected us.”