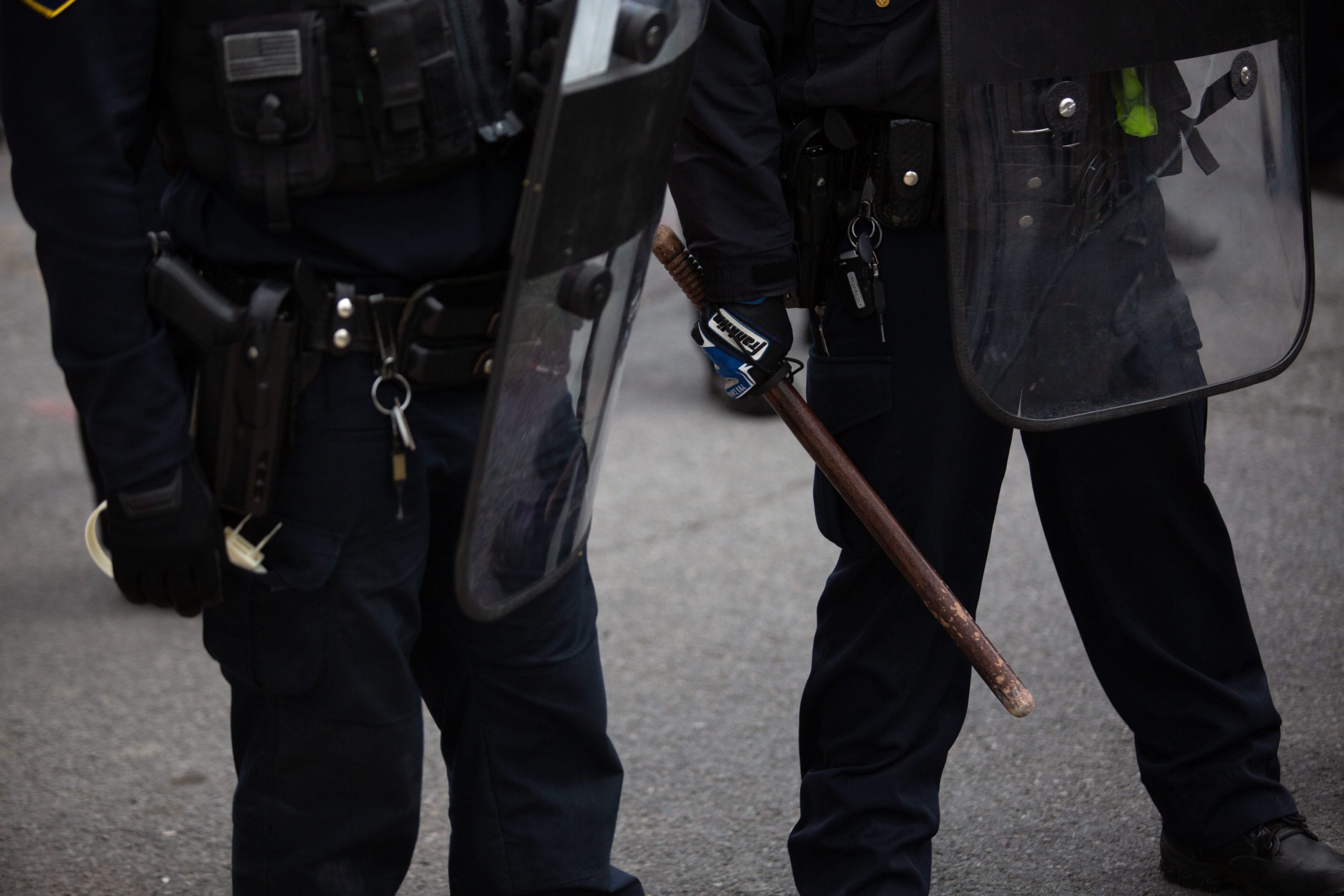 Last Friday afternoon it appeared that over 20 Albany Police Department officers dressed in full riot gear were about to repeat the APD’s performance from the day before, when they violently raided a protest encampment in Albany’s South End, smashing young Black, queer and transgender protesters to the ground with their riot shields bearing “Blue Lives Matter” symbols, then clubbing them with night sticks.

Officers marched in formation out of the South Station garage just as they had the day before, but this time there was no tent city to destroy. “Take the fucking tent down or we’ll take it down for you!” ordered one APD representative.

The apparent justification for the show of force? Two pop-up canopies protesters had erected on the sidewalk across from the station. Under those canopies was an array of bagged lunches delivered from the Juice Factory, along with bottled water.

An unlit, portable wood stove was also part of the impetus for 20 officers to storm forth from their HQ and to risk that the situation could again quickly escalate into violence.

Officers began to surround protesters in what appeared to be a corralling formation. “You want us to take it down, OK. We’re leaving,” organizer Lexis Figuereo responded to one officer.

But Figuereo and the eight or so other protesters weren’t moving fast enough, and police continued to move forward, opening the gates they’d erected in what appeared to be a move to initiate physical contact.

Figuereo and his allies scrambled to disassemble the canopies, in an effort at appeasement, as officers demanded they move faster and threatened to initiate force

Some protesters who had been taken into custody the day before demanded to know where the APD had taken their belongings. “Are you going to smash all of our shit again? I want my fucking cell phone!” shouted one protester.

Finally, with the cloth stripped from the canopies,  most of the officers in riot gear retreated to their precinct.

With police finally gone, protesters got back to doing what they’d done for most of the last week: they set up a table with two portable burners and began cooking burgers and serving them to local homeless people who for one reason or another were not welcome at the local mission.

Protesters procured spices like adobo from community members. A man from the mission dressed in an apron and chef’s hat enjoyed a meal and then returned the favor by lending protesters cooking utensils.

As the night went on the menu grew; pizzas were delivered, sometimes by people who presented themselves as supporters and other times from anonymous donors. The cooking station began serving beans and rice as well as hot dogs. DMX, NWA and other classics blared from large portable speakers.

A middle-aged man sporting a pony tail and dressed in denim exited another, neighboring mission building approaching protesters to welcome them back and offering the use of their bathrooms. “Anything you need!” he said.

It was around this time that Figuereo became aware of a letter from Perry Jones, executive director of the Capital Rescue Mission, to Mayor Kathy Sheehan. In the letter, dated 4/22, the day of the APD’s raid, Jones complains that mission staff were harassed, their parking lot was blocked, protesters were using their parking lot as a bathroom and fire pits in the camp represented an imminent danger.

Figuereo scoffed at the letter, noting that his allies had fed, clothed and sheltered those rejected from the mission. In one instance, witnessed by this reporter, the protesters peacefully intervened in a domestic dispute between two individuals. Some of those the mission served or rejected became regulars at the camp. Others benefited from it on the way through. One protester repaired an elderly woman’s walker. A number of homeless individuals regularly ate meals there and sought refuge from violent encounters, or from partners who were drunk or on drugs.

Protesters did verbally spar with two particular representatives of the mission in the presence of this reporter, but those incidents seemed to be based in political and social disagreement, one issue being that the mission dictates Christian belief and sobriety. “We’ll help everyone you reject,” Figuereo said repeatedly.

Albany Mayor Kathy Sheehan defended the ADP’s actions of the day before, saying that it was critical to get Arch Street open.

That narrative was questioned by both protesters and the press, because the street remained closed to traffic as of Saturday night. Protesters were not present on Friday morning, meaning that the only things blocking traffic were the elaborate barricades set up by the APD and city workers.

As the sun began to dim, word spread on social media that allies should gather at Arch Street at 7 p.m. Young white protesters clad in black with their faces covered slowly filtered into the protest area. Officers stood across the street keeping close tabs on what felt like a low-key summer block party.

As the crowd mingled and buzzed with conversation, activists from Troy began a training session on the process of de-arresting people. Slowly, groups paired off, simulating an arrest and then practicing how to stop it–pulling the arrestee to safety. The block rang with the sound of laughter mixed with thick bass lines and sharp beats. And then abruptly a pall of silence fell over the crowd.

A tall white man clad head-to-toe in black toppled a police barricade. Members of the protesters’ security team moved toward the man, inviting him to leave. He objected. “You need to leave now!” a member of the security team insisted. “OK. I guess I’ll just go home,” came the reply.

Figuereo was handed a bullhorn and took his place in front of the crowd, the police station his backdrop. “White allies do not instigate. We’ve been peaceful for this week. It’s the APD who has escalated, caused violence. Do not put Black bodies at risk!”

The crowd remained frozen, some in anticipation, some seemingly in dread. Police were making their way toward the crowd.

This time the officers weren’t barking orders. They righted the fencing and tied it back up before departing. Nevertheless the crowd remained spooked. Rumors spread that a force of Rensselaer County Police was headed into town as reinforcements. Some worried that a conflict was imminent, but the worry faded as the music returned.

The protesters were back on Saturday. The food station was still cooking, the stereo still playing music. Activists Kasey Charles and Mikayla Foster shared their experiences of being violently arrested on Thursday.

“What happened to me, my phone was knocked out of my hand. I was hit, grabbed by three officers. I was pushed to the ground and flipped over…My shoulder was dislocated, and I was just the first person arrested,” said Foster. “It took you six days to decide we were in your way. Does it look like there is anything wrong with your police station? Does it look like our chalk did anything to your building? After six days of feeding the homeless, after six days of making sure homeless people are safe, after six days of preventing violence, we had violence perpetrated against us.”

As Saturday gave way to Sunday, the protesters were packing up their gear. There was a sense of exhaustion, and a sense of disbelief, that the most powerful people in Albany were vilifying their actions and justifying police violence — the very thing they had come to protest in the first place.

David King
David Howard King is an award-winning reporter and editor who served as State Government Editor for the Manhattan-based Gotham Gazette for eight years. He writes regularly on housing policy for Shelterforce and is a multiple New York Press Association award winner and was a co-recipient of a New York Press Club award. He's lived in and written about Albany since 2005.