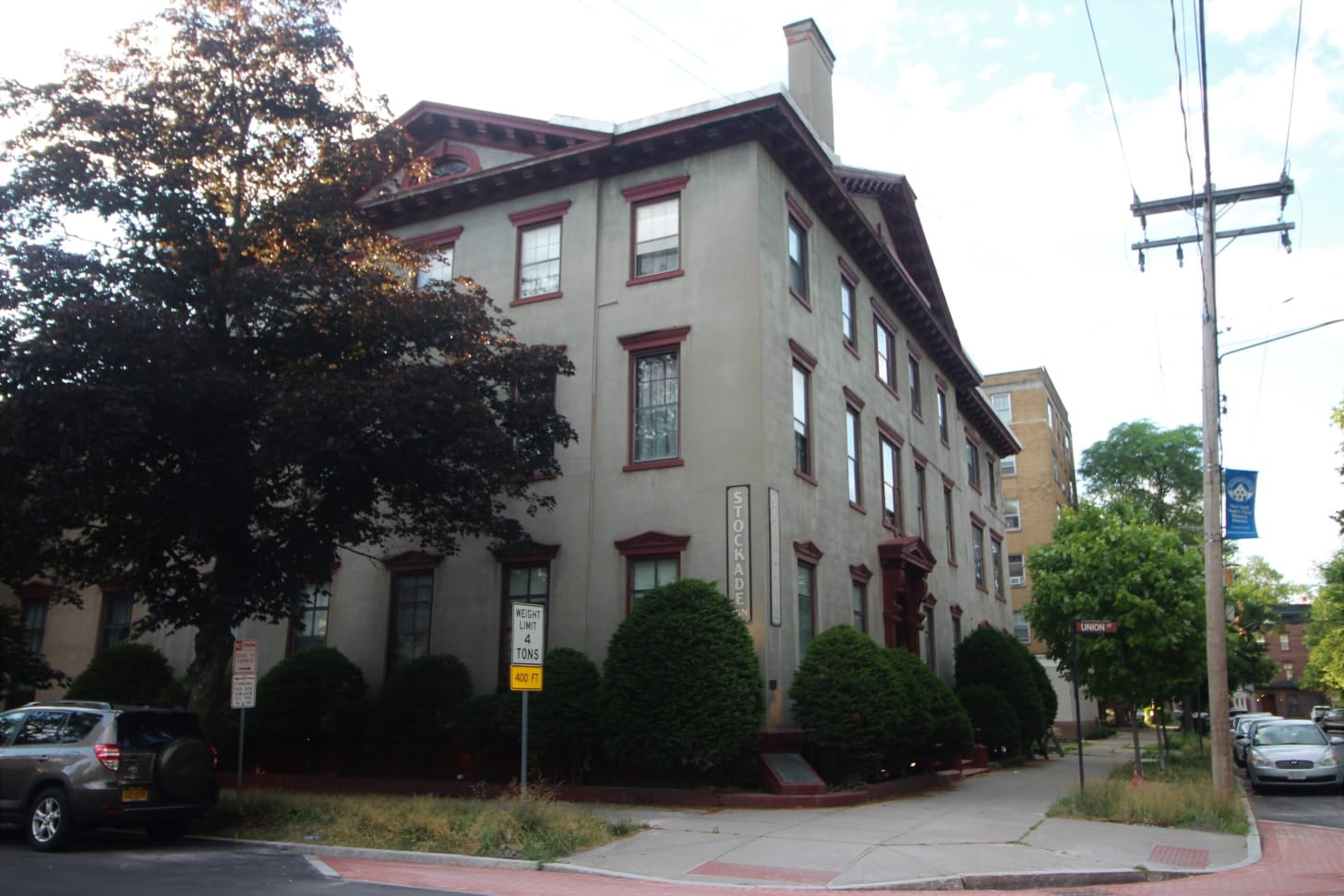 Redburn Development has a vision for the Stockade Inn, a Schenectady landmark shuttered after back-to-back business hurdles: turnover, a kitchen fire, and the COVID-19 shutdown. While using historic tax credits, the developer wants to turn the building into $800 to $1,200 a month apartments and office space. And it just might happen without the support of neighborhood officials.

During a Zoning Board meeting on June 11, community members spoke out against Redburn’s request to repurpose the Stockade Inn. They argued that the space’s decline was the result of mismanagement, not industry trends. It was defeated by a 3-1 decision, which required four votes to pass.

However, the seven-member board under state law can reschedule a vote if a majority decision barely hits quorum. Redburn’s proposal is back on the meeting agenda for July 1. There’s no required hearing.

“They could invite people to speak,” said Stockade Association (SA) President Suzanne Unger, an opponent of Redburn’s plans, worried that the Zoning Board would approve the measure. “But I’m not sure they’ll do that. I just think they’ll revote.”

Since the last Zoning Board vote on June 11, Unger discovered that Jack McDonald, a former co-owner of the Stockade Inn, holds the mortgage for the building’s current owners under Old North Church Street LLC. Lake George-based Robert and Nerisha Gregor have owned the property since March of last year.

Jack McDonald spoke in favor of selling the property to Redburn at the last Zoning Board meeting, claiming the current owners have faced fiscal distress. But he didn’t disclose his current financial relationship with the Gregors.

“It’s very interesting, isn’t it?” said Gloria Kishton, president of the Schenectady Heritage Foundation, a historic preservation nonprofit, after claiming that the mortgage and Redburn’s purchase offer are the same. At $575,000, the mortgage owed is $30,000 more than the current offer.

“Clearly [Jack McDonald] had a financial interest in getting a certain result,” Unger said. “So, that’s a problem.”

“I don’t see how it is a conflict of interest because it is a public document,” said Jeff McDonald, son of Jack McDonald and former co-owner of the Stockade Inn. “So, I mean, the viewpoint of the previous owner of the building is very viable.”

Jack McDonald’s undisclosed financial ties are among a list of grievances SA and the Heritage Foundation have with Redburn’s request. They believe that the previous owners failed to show the building’s profitability and favors keeping the building as a boutique hotel.

Redburn Principal Jeff Buell won’t entertain that request. Comparing the business to other shuttered hotels in Schenectady over the last 20 years, continuing operations would be a gamble, he remarked in a June 17 interview. “Running an 18-room inn is, I don’t want to say it’s financially impossible, but I certainly wouldn’t want to take on the challenge.”

Redburn Development has vowed to use historic tax credits to preserve the Van Curler Room and areas of the interior. The developer also stated that it would not change the building’s exterior.

The developer already owns 26 properties (more than 100 apartments) in the Stockade District. Should Redburn acquire the North Church Street property, that would add 23 more apartments to the developer’s neighborhood portfolio.

Redburn has stated that it would follow the Schenectady 2020 Comprehensive Plan, which includes the goal of reducing the number of rentals in the Stockade District. Unger alleges that the developer has strayed from that plan. Comprehensive planning is not legally binding, but typically just a list of goals based on community input.

Roughly 80% of housing in the historic district are rentals according to SA. The rub is that more apartments could mean greater tenant turnover, a lower diversity of establishments and sometimes poor maintenance, Unger said.

SA and the Heritage Foundation scheduled a meeting to discuss the upcoming vote and neighborhood’s next steps on Sunday, three days before the next Zoning Board meeting.

The Gregors seek to close the sale should the measure pass.

Them + Us Media immediately reached out to Buell for comment regarding the revote and Jack McDonald’s financial ties. The principal has not returned comment at press time.

“I don’t think anything makes this [project] harder,” the developer said more than a week ago. “I respect the opinions of people living in neighborhoods always and look forward to finding common ground.” He continued: “If we can’t, then we will move on to something else.”

As a result of the failed vote, the city Planning Board scrapped Redburn’s special use permit and site plan review request from its June 17 agenda. The project’s future was “up in the air,” Buell said during the last interview.

The property has served a number of different purposes over the centuries. Arendt Van Curler, the so-called founder of Schenectady, lived on the land during the 1600s. It was destroyed during the Schenectady Massacre of 1690. Since 1816, the building has served as a private residence, bank, public high school, and a men’s social club for the Mohawk Club.

A special permit variance, a greenlight from zoning authorities to deviate from land use regulations, in 2003 allowed the McDonald family to turn the historic building into a boutique hotel and event venue. The Inn became a popular destination for weddings, jazz gigs, and fine dining at its 30-seat lounge. At one point, as many as 10 members of the family were involved in the operation.

The McDonalds sold the property to Gregor Hotels for $975,000 in early 2019. It was in operation for about six months.

At the Zoning Board meeting, Jack McDonald claimed that the inn was profitable during its first five years, but difficult to sustain over the last decade due to increased competition.

This claim wasn’t backed up with adequate financial records, Kishton said. “What really happened there?” Kishton said. “I really don’t think that the commissioners had a good understanding of the financials.”

Kishton claimed that the McDonald’s 2013 request to the Zoning Board to renovate the former Knights of Columbus building for extra rooms was a sign of prosperity.

Jeff McDonald said that the project wasn’t cost-effective and the family eventually turned it down. “If we did the project and filled the rooms, they could make that argument, but I don’t think the fact that we didn’t do the project is a valid argument.” Regarding the Inn controversy, SA isn’t speaking for all of its members, he later added.

SA and Heritage Foundation officials claim the Stockade Inn’s downturn was self-inflicted as a result of poor management decisions, including missed calls and cutting back jazz performers’ hours. Them & Us Media has not independently verified either allegation.

Jasmine Roberts, a 32-year-old Stockade resident, also argued that the Gregor-run venue was badly mismanaged. Having once eyed the spot as a potential wedding venue, Roberts called the Stockade Inn several times, she told the Zoning Board. Representatives from the Inn only returned her call three weeks later.

Opponents therefore believe the Inn cannot qualify for hardship, a clause required by the Zoning Board in order to obtain a variance.

Robert Gregor told the Daily Gazette that damage following a kitchen fire in January and pandemic-reduced traffic in March ultimately crippled business. The fire, caused by a cook reducing butter, ripped through the kitchen, causing smoke and roof damage. The financial toll of both events remains uncertain.

The Gregors showed the property to several undisclosed hospitality operators, which supposedly agreed that it was unviable, according to Jeff McDonald.

At the time, the Gregors were already looking to exit the hospitality industry. They’re selling two three motels in Lake George, Lake Haven, Montreal and Sundowner as well as the Herbert Grand Hotel in Maine, once owned by Robert Gregor’s mother, who died in November.

In a comment to a Facebook friend on April 24, Robert Gregor described the impact of COVID-19 to the hospitality chain: “The pandemic is killing business and everyone is pretty much on edge at this point. Very scary and difficult times.”

Buell told Them + Us Media on June 17 that the Stockade Inn’s recent shutdown cemented the developer’s interest in the site. The principal emphasized the pandemic’s impact on the hospitality industry as an unmanageable hardship. Board members, excluding Krystina Smith, agreed.

“We only were looking at that building because of COVID[-19],” Buell said. “In my opinion, I don’t think that inns that size are going to be functional in the future.”

Buell looked at the Stockade Inn with both McDonald and Gregor before the fire, according to his testimony at the Zoning Board meeting. After the January blaze, Gregor, more willing to negotiate on a price, contacted Redburn to reinvigorate purchasing talks.

Redburn’s interest in the Stockade Inn has been lauded by the Schenectady Metroplex Authority, a public benefit corporation. The tax-funded organization has frequently supported the power player through numerous projects. Ray Gillen, chair of the Authority, who could not be reached for comment, told the Zoning Board that Redburn has a great reputation and that its plans remain the best available option.

Jeff McDonald, whose family runs another historic property, the Van Dyke Lounge, said in an interview that the property would likely remain abandoned or stuck in a cycle of ownership transfers had Redburn not taken interest.

A specialist in rehabbing urban decay through tax credits into mixed-use development, Redburn is a burgeoning name in the Capital District’s development arena. In Schenectady, the developer owns notable properties like the Foster Complex, 508 State Street, and the Clinton Street Mercantile. The developer also has major downtown holdings in Albany, Troy, and other cities in Upstate New York.

Last year, the corporate developer bought a major slice of the historic district from longtime developer and Stockade resident Robin White. Although White had control over 18 properties in the district, she said that the former owner, a resident, maintained the buildings adequately and focused mostly on the neighborhood.

“It was just like we don’t want to have the whole neighborhood controlled by one individual,” Unger said about White. “What’s really troubling is that Redburn is not an individual.”