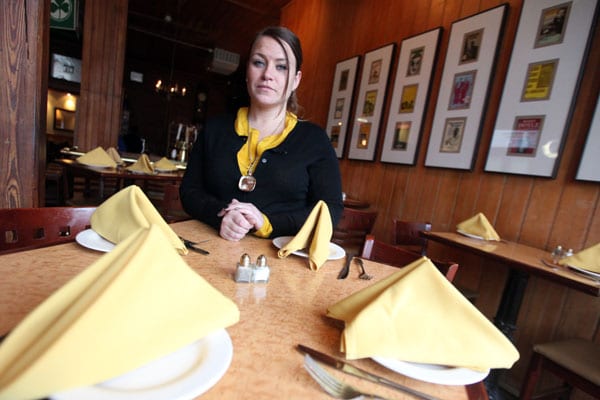 At the Ginger Man: An Interview with Julia Byron Note: this interview is part of a series done by St. Rose students in Daniel Nester’s ENG251 class. Meet Julia Byron, General Manager at The Ginger Man, as interviewed by Seamus Cunningham:

So you’re the general manager here. Just from hearing that title, it seems that you have a very busy day. What do you do?

Honestly it just depends. There is, you know, there’s payroll, but the primary focus, especially during the daytime is helping everybody out with lunch and making sure that the food is coming out on time. You know, just making sure the normal operation of the restaurant is going smoothly. We have the liquor, the soda, the beer, the wine, you know, for everyone and

I can sense by looking around that you offer a nice, relaxing place to hang out. Perhaps that feeling reflects in your service as well. When your customers enter the Ginger Man, is there a certain way you connect to your customers, or interact with them?

Let’s say if you were to walk in the door on a Friday night. The host staff would say, “Hello. How are you? Do you have a reservation with us this evening?” And if you do, wonderful then we would mark you off appropriately. If you didn’t, and we didn’t have a table for you, we would quote you a time, you know how long it would take for a table, and generally direct you to the bar. During the rest of the guest’s meal, I walk around and clear plates or bring water to the tables and just try to engage them even if it’s just for two minutes, “Is everything ok? Could I get you some more wine? How are you guys doing tonight?” Fortunately we do have a lot of regulars that come here.

There has been a shift in the number of crackdowns within the city of Albany. It seems that more bar raids are occurring than before. Because of the crackdown on the bars around here, have there been any changes here?

It hasn’t been an issue for us. We do not get to many college students. If we do, they’re either on a date, or it would be the kids that live on this block that will call and just get to-go food.

In class, we were talking about the Cabaret Laws, which, as I see it, are meant to create the neighborhoods more peaceful and in order. Do you think the Cabaret laws are a good thing to have or not?

Fortunately, the Cabaret laws do not affect the Ginger Man because we don’t offer live music. I do know a lot of people, of course in this business, that it does affect. I don’t think it’s a big deal, you know, to have a special license, however, this shutting at 2am stuff I don’t agree with, purely because in other major cities it doesn’t seem to work for them. With Albany being such a student-based city, where would they go because they’re not going to go home? Closing early would not be an easy adjustment and I do think it would cause fights and loitering and destruction. I just don’t think it would be good.

When I was little, I usually walked around this neighborhood with my family, and it
seemed that there were more families than there are living on this block today. It seems that the population on this block is made up of college students more than families today. I was wondering what your opinion was of the kind of neighborhood that the Ginger Man is in?

We are in what is called the “college ghetto”; again, it is a student-based population around here. It’s been very important to my family that the neighborhood be maintained. There has to be a police presence. I don’t want to see, and my guests don’t want to see, college kids coming out of wherever and carrying kegs and cases of beer and, you know, smoking and littering and

That’s why it’s great to see all these coffee houses that are legitimate business; it legitimizes the neighborhood and keeps unwanted neighbors out of the area. There’s just a lot of recklessness around here, and again it is the student population. Parking is an issue for us, we have two lots in the back, and they are instrumental. You can bring your grandmother here and she’s not afraid of the neighborhood. But we’ve always tried to have a good sense of community here and be respectful to the neighborhood itself.

Is there any cool experience or customer that you remember coming into the Ginger Man?

When they were filming Ironweed, William Dafoe ate here, and then I think that would be it actor-wise. We have a lot of great senators that come in here. Senator Breslin eats here quite frequently, you know, the mayor comes. We’ve got… it’s all really old Albany people.