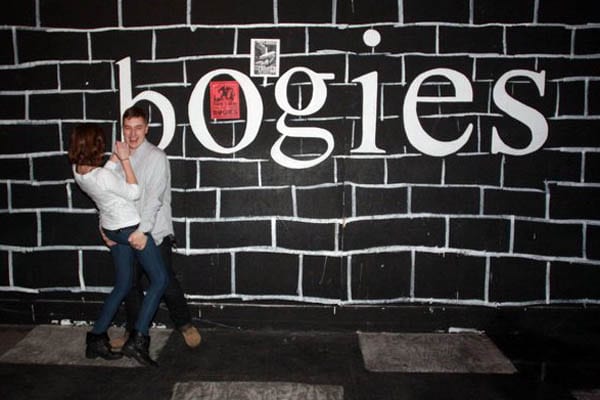 Bogie’s is anything but “Out Of F&#%ing Order”: An Interview with Mike Valente Note: this interview is part of a series done by St. Rose students in Daniel Nester’s ENG251 class. Meet Mike Valente, Owner of Bogie’s, as interviewed by April Zwack:

You’re a local and this is the place for local bands to play. I have a bunch of band friends who’ve played here: Restless Streets, The Alaskan, I Was A Hero, etc…. Dalton from The Alaskan had something cool to say: “ I’ve played there probably a dozen times…it feels like home to me because it’s got character. I love playing at Bogie’s. They’ve never treated me like I don’t matter because I’m in a local band.” I know those guys. I’m in a local band, so I get where the local bands are coming from.

Your mission states that Bogie’s is “run by musicians for musicians” and it aims to “provide an experience that will bring memories for a lifetime.” Do you think because this venue is ran by musicians you have an advantage with how you operate?

It can affect it on the business end, but we care. We don’t screw the bands over because we get what it’s like to be in a band. Bands aren’t dollar signs to us. The bands are taken care of.

I told my grandmother I was seeing a show here and she goes: “April Lynn! Why would you go there?” I tried to tell her how laid back and awesome it was.

Nobody messes with anyone and everybody cares. There are a lot of people with tattoos, which if you find that scary [laughs]. I have parents come here and you can tell they’re initially a little sketched out, but by the time they leave here they’ve had a good time.

When I told my friend I was here to interview you he laughed and said “Too funny. Mike’s this super tall guy with a beard and covered in tats and you’re super little.”

Hawthorne Heights–one of my favourite bands–has sold over a million and a half records and have played here. Is it common for bigger bands to play here?

Yeah. I get some of the bigger bands that want to play smaller clubs. Like Acacia Strain—they do a yearly Toys for Tots drive and play here. Seeing them in this venue is a lot more up close and personal. Madball came here October 6th and every time they play here it’s fun. I’ve had a lot of big name bands that people have been surprised the stage is only about a foot from the ground and there are no barricades. There’s a lot more interaction with the bands.
It’s like there they are, they’re right there up close and personal.

Bogie’s is real chill and has its own vibe. I mean, I walked past an out of order sign here that said: “Out Of Fucking Order” and it just made me laugh. That’s genius.

[Let’s out a big laugh.] That’s just how it is here.
This venue is a melting pot for genres across the board. A metal band plays one night, the next night is a punk or ska band.
We’re known for the heavier stuff, but we do hip-hop, rock, metal. We do hardcore. So the crowds that are attracted to here definitely differ between the genres.

The new cabaret laws requires live music, DJs and karaoke to stop at 2 a.m. Has this impacted Bogie’s?

They aren’t really gonna affect us, but we’re doing what they’re asking. The majority of our shows are done by midnight and I can adjust our schedule a little bit if I need to.

With it being a bar here, do you notice a lot of drinking happening? Or underage drinking?

When this was a college bar it was all about drinking. When we started taking over three years ago it became a different story. For the most part, if they’re underage they don’t care about drinking. They’re just happy to see a show. We have a zero-tolerance mentality and I think the kids know that. They don’t want to lose the chance to see the bands.

Do you notice a lot of people who look intoxicated at shows?

It’s happened a couple times. If someone is visibly intoxicated, it’s like, “See you later.” Two weeks ago a national act was playing, the ticket wasn’t cheap, man. A kid was really intoxicated trying to get it and we denied him. He’s like, “I bought a ticket.” I said, “Too bad— you’re drunk and you’re not of age.”

You hear stories about musicians going on crazy rants, bringing animals on stage or flashing a crowd. Have there been any bizarre rock n’ roll moments that’ve graced your stage?

Well, I just had a band here the end of August called the Murder Junkies, a punk band. The singer they had was named G.G. Allin, who died of a drug overdose. His brother plays in the Murder Junkies. The drummer decided that he wanted to play naked, so he played butt naked.
We had another band here called Eat the Turnbuckle, which had a wrestling theme. These guys brought the pro wrestling theme into it and smash fluorescent lights over their heads, hit each other with bottles and stab each other with forks. [Laughs.] They had to promise to clean up their mess to get paid.