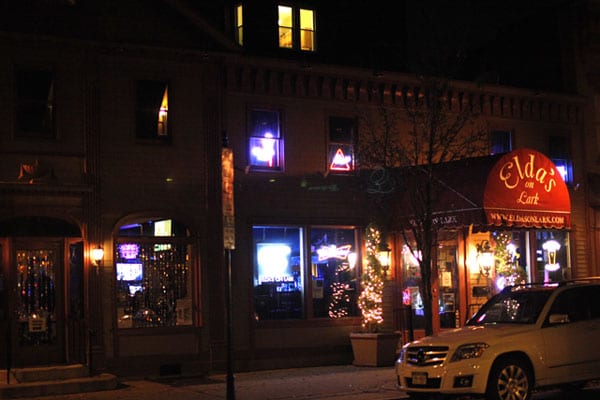 Casual Yet Classy: An Interview with Daniele at Elda's Note: this interview is part of a series done by St. Rose students in Daniel Nester’s ENG251 class. Meet Daniele, bartender/server at Elda’s on Lark, as interviewed by Brittney DeVoe:

So here I am at the bar at Elda’s. People are sitting down around me at the bar to have a drink as the dinner hour approaches. Everyone is very friendly and welcoming here. I’m under 21 and a college student. What does Elda’s have to offer me, and people like me, who don’t like to party, or are underaged?

If you don’t like to party, and you can’t drink, I mean we have great food, and we have a beautiful lounge where you just hangout. The couches are great, and the food is on point. Our appetizers are so good. So, if you’re not 21, just hang out, have some food, watch some T.V. on the flat screens. We definitely can serve people at the same table as those who are underage. We check ID’s and mostly people are very honest here. So I’ve never had a run in where somebody’s not 21, and stuff like that.

I know when I came here last week, you were preparing for Lark Fest. Did anything crazy happen then?

Lark Fest was probably the craziest thing I ever have seen happen, just because it was so many people all at once, and it was insane in here. It was like nothing I have ever seen before. So it was just the most intense situation, but it was fun [laughs] at the same time.

What is your opinion of the Cabaret Law?

It really depends. I mean yeah nothing good goes on between two and four o’clock, but at the same time you’re kind of taking away from businesses. For someone like me, I don’t get out ‘til 11 o’clock or 12 o’clock at night, and I want to go out, and have drinks with my friends, but they’re closing up.
It’s definitely not fair. I mean I understand where they’re coming from, but at the same time I’m like, man that’s really going to suck for someone like me [laughs]. By the time we go out it’s going to be time to go back in.

Do you think Albany will be safer kicking people out at 2 a.m. compared to 4 a.m. or later?

I think the time has no difference at all.

I’m from a small town and we don’t really have any upscale restaurants except may be one, so I wouldn’t usually come to a place like this unless it was for a special occasion. That being said, this place seems very upscale but still causal.

We have all walks of life coming in here, and we definitely have a lot of different people coming in here all the time. I mean, yeah, it’s kind of an upscale feel, I guess. I think it’s just because we keep the place clean, and we have all these cool lights, but for me I don’t think it affects clientele.

Does it ever get rowdy here? Have you ever had to kick people out?

Oh yeah. It’s definitely gotten rowdy here, but every bar gets rowdy. We’ve had to kick people out, but I mean it’s only if they’re going to be causing problems. We’re talking people who are becoming dangerous to themselves or around other people where it’s become dangerous. Like breaking something, stuff like that. That’s when we throw them out, but other than that I mean for just being drunk I’m not going kick you out.

Seeing the actions of people after consuming alcohol, does it affect you in the way you party or drink and act, when you go out?

I definitely become more aware of who I am when I go out. Especially when people see you behind the bar here and then when they see you out, and they recognize you. It’s very important that you stay respectful of yourself, and you keep a certain image going out. You don’t want to be that girl Daniele from Elda’s being a waste. You don’t want the sort of image of yourself. You want to keep a positive image for Elda’s, because you are representing this place. When I’m off the clock I definitely know that I need to keep myself in check.

I think it would be interesting to be a bartender; I’m not so sure I could do it though. What are the positives and negatives of being a bartender?

I think it’s getting to know all the people, seeing people from a different point of view. I mean, and getting, like, your friends, and you know clients kind of drunk, and feeling good and stuff like that. And just meeting interesting people. I’ve met so many different people, and all walks of life, and they’re just here for the drinks and the entertainment of it all. And, you know, it’s just so much fun being behind the bar getting to talk to people, and at the same time it makes me not want to drink anymore.