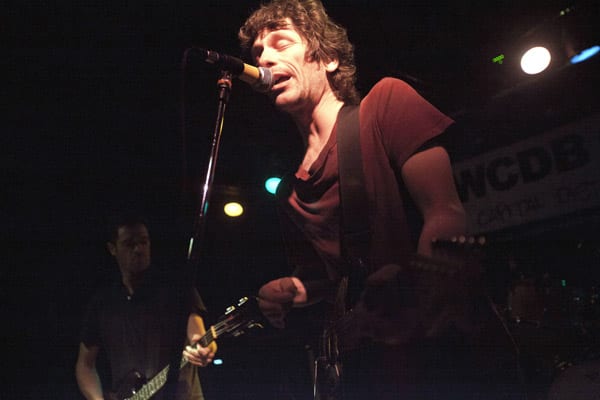 Lotus Plaza’s performance reflected frontman Lockett Pundt’s humble demeanor, which is understandable being that he is normally the guitar effects powerhouse that compliments his more well known and spotlight dominating Deerhunter band mate Bradford Cox. There was hardly anything “frontman” about him — he didn’t butter up the crowd or incite excitement on stage. In fact, he hardly spoke or smiled. But the bands straight forward rock worked and held true to their much talked about “Best New Music” rating from Pitchfork for their latest album, and Pundt’s first with a full band, “Spooky Action at a Distance”. It is, after all, shoegaze — the act of staring at one’s shoes on stage. A night of loopy distortion for an antisocial fan, it was a soft and easy introduction to the next act. Disappears features Sonic Youth’s Steve Shelley on drums, but the star power hardly ends there. Sure, Shelley tore it up on drums as expected, but frontman Brian Case maintained an energy that captivated an audience that was just waking up from a Lotus Plaza induced daze. Case’s voice pays homage to the heavy postpunk sound of his former band The Ponys, but adds an experimental style that sets Disappears apart. And he even smiled. But don’t stop there — Jonathan Van Herik was what the crowd really wanted all night. Scratchy, noisy guitar echoed throughout the room and remained unrelenting throughout the show — but modestly at side-stage. He is to Disappears as Pundt is to Deerhunter and tonight proved that the shy shall not be ignored, especially when the shy’s shredding guitar is pulsating through your eardrums.