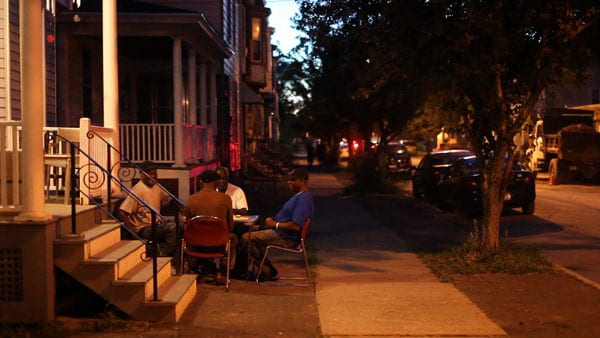 Every day for 13 years, “as long as rain ain’t falling”, four Jamaican men have gathered to pick through bones on their Park South sidewalk.

Tonight is no different — Ivory dominoes are strew about a wobbly card table framed with duct tape, commonly called a “boneyard”. The men passionately slam down their domino blocks, only breaking to greet the occasional neighbor that strolls by or to free up a hand to puff down a cigarette. The quiet clacking noise continues into the night after the sun sets behind Albany Medical Center, turning a multi-block urban construction zone into a field of echoing cricket clacks.

The domino game will be forced to permanently move by December 1st as a result of the hospital’s neighborhood redevelopment plan. Ask the men, some of whom work for the hospital, and they don’t mind: “It’s a good thing. Helpful to the whole Albany area. They take good care of patients there.” The men have lived in the neighborhood for decades, and represent the values any newly manufactured community will strive for, but admit that the hospital was there long before they were. “It’s their neighborhood.”

But where will their game be played come December? They don’t know. The only move on their mind tonight is the next one going onto the table.