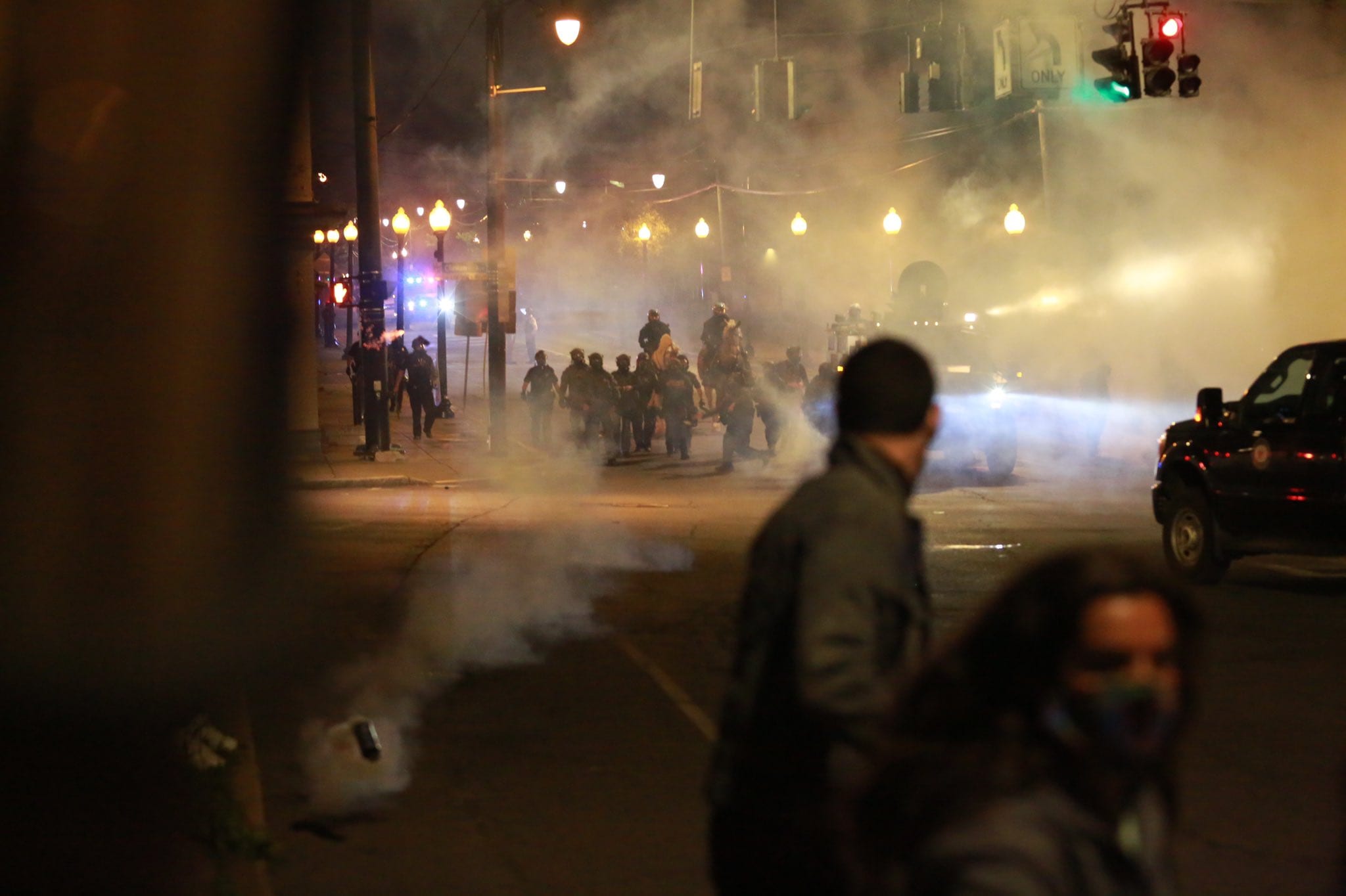 Tear gassed in their own homes, Albany residents speak out

The only warning was the faint clank of the can hitting the pavement.

Within seconds, smoke would fill Henry Johnson Boulevard in Albany’s Arbor Hill neighborhood, where nearly half of the population lives below the poverty line and a viral video documented police brutality that led to an officer’s arrest.

It was military-grade tear gas, deployed by police to disperse a crowd of protesters. If they weren’t already familiar with the chemical agent’s debilitating effects then they would be within seconds.

Two weeks ago, Albany Police — at the direction of Chief Eric Hawkins — fired can after can of this gas in densely populated primarily Black neighborhoods as officers worked to diffuse two nights of Black Lives Matter protests.

What started as peaceful daytime protests on Saturday, May 30th in the South End and Monday, June 1st in Arbor Hill devolved into chaos after the first brick or firework was thrown by an individual during nightfall.

In both cases, protesters demanded — but felt they failed to receive — a meaningful dialogue and solidarity kneels with police and city officials after hours-long standoffs. The situation then escalated.

Albany Proper spoke to multiple protesters who were there as the once peaceful demonstrations turned violent, as well as two nearby residents who were not involved in the protests but were affected by tear gas that leaked into their home. They spoke of the pain and fear they experienced as they were overcome with chemicals or struck with rubber bullets fired by police wearing riot gear and operating military-style vehicles, escalating an already tense demonstration spurred by George Floyd’s death.

The protesters spoke without providing their full names to protect against potential retribution. All denied being involved in rioting or looting.

They include Tyler, who said he was struck in the abdomen by a rubber bullet fired without warning by a police officer early Sunday morning in the South End. And Dani, who said it hurt to take deep breaths the day after inhaling tear gas in Arbor Hill.

“It felt like getting hit by a soda can shot out of a literal firearm,” said Tyler, who still has a bruise on his stomach two weeks later.

Dani said she believes the neighborhood the protests were in may have played a role in the police’s response that night.

“I don’t think they would have used the gas if we were in another more affluent part of Albany,” she said.

CAUGHT IN THE PATH

While protesters on the street ran, unassuming citizens in the neighborhood’s densely packed row houses sat helplessly as the aerosolized chemical agent leaked into their homes.

63-year-old Glynnis Marshall was watching a movie in her living room in Arbor Hill when the smell of tear gas first hit her. “It was nothing I had ever experienced before … and I am a baby boomer,” she said.

Glynnis lives with her husband and sister, all of whom suffer from pre-existing conditions that make them vulnerable to COVID-19 complications and have kept them isolated at home for the last three months. When she began feeling a scratchy throat and burning eyes, she looked outside to see the street looking like a “complete fog.”

“There oughta be a law against it,” she said. “I’m in my house and I got gassed.”

When she tried to file a complaint with the police department, she said she was told by the officer on the phone that they “weren’t aware” of the incident she was describing. Glynnis called that a “bald-faced lie”.

According to a recent ProPublica report, people with certain pre-existing conditions already have weakened respiratory immune systems and may find it harder to fight off coronavirus and other flu-like diseases after being exposed to tear gas.

“If your lungs are already wheezing and coughing, working hard to expel this tear gas or this irritant, it’s unable to have that reserve to fight off any infection, whether a virus or bacteria,” Dr. Purvi Parikh, an allergy and immunology doctor at NYU Langone Health, told ProPublica. Since then, 1,288 public health professionals, infectious diseases professionals, and community stakeholders have signed an open letter speaking out on the issue.

So while older residents like Glynnis continue to self-isolate due to COVID-19, tear gas has now become an unexpected added risk. That hasn’t changed her support for the Black Lives Matter movement.

“If I could run, I’d be out there,” she said with a laugh when considering what she witnessed on her street.

Meanwhile, residents of the Mansion neighborhood have only grown more upset since the events that transpired in their neighborhood two weeks ago.

Maria Parisella has lived in Albany for more than 40 years and has never seen anything like it. “It was like an out of body experience,” she said.

After the initial shock wore off, the questions started to form in her head. “I can’t believe how clueless I was that I wasn’t up in arms about it immediately the next day.” She says she is now planning on writing a letter to Mayor Sheehan and Chief Hawkins to make them aware of what happened at her home.

Maria also took issue with comments made by Albany Police Officer Union President Gregory McGee. “If you still stay around even after we deploy (tear gas), you’re there for violence,” he told Spectrum News.

For Maria, that was personal.

The use of tear gas in international warfare has been prohibited by the Geneva Protocol since 1925. That hasn’t stopped it from being used throughout the United States during recent protests. Experts have now called on tactics such as the ones used in Albany to be referred to as “less lethal” instead of “non-lethal.”

Cities across the country have started to take notice — Seattle and Portland have partially banned the use of tear gas and a federal judge in Denver temporarily banned that city’s police department from using it. New York State Senator Jessica Ramos has introduced legislation to ban its use in New York, while Congresswoman Alexandria Ocasio-Cortez has also co-sponsored a similar bill at the federal level.

“Police officers have unleashed life-threatening tear gas and rubber bullets upon New Yorkers using their First Amendment right to protest police brutality against Black Americans in recent weeks,” Ramos said. “By cutting off their ability to senselessly attack crowds using chemical weapons, and other military equipment, we will encourage law enforcement to find other peaceful ways of doing their jobs while protecting our communities in times of disarray.”

Ward 10 Common Councilor Owusu Anane was there with fellow Councilors Jahmel Robinson, Tom Houey, and Derek Johnson trying to help de-escalate the situation when they found themselves among the crowd running away from tear gas.

“We have never seen a protest that escalated into a riot like this in at least 30 years,” Anane said.

Asked if he thought he would be running away from tear gas when he got into local politics, Anane didn’t pause. “I’m always going to be where the people are,” he said. “In tough times I will be there with them.”

While Anane believes there isn’t enough information at the moment to completely ban the use of tear gas, he has said he will introduce reforms to address implicit bias, including strengthening the Community Police Review Board while also making it easier to file complaints against the police, and reviewing the department’s use of force manual. He is upset that medical crews were not on the scene to assist with tear gas victims, which he says is a policy already put in place by the department.

“We have to go back to the drawing board,” Anane said.

Why, then, has the Democratic mayor of Albany, Kathy Sheehan, largely remained silent about the use of military tactics within her own city?

During a virtual forum hosted by A Block at a Time on Thursday night, Mayor Sheehan stopped short of calling for a ban on these methods, but acknowledged for the first time that “we have to be cognizant of the use of tear gas” and “we let people down.”

Hawkins, the Albany Police chief, defended his department’s actions. “Our officers did a great job,” he said.

Sheehan’s office did not respond to requests for comment and has not put out any executive orders regarding the use of tear gas or projectiles.

Since the events of last week, Sheehan has signed an executive order banning choke-hold maneuvers, which Albany Police Union President Gregory McGee admits have already been banned by the department since 2014. The city also hung a Black Lives Matter banner on City Hall and painted the motto on Lark Street. A statue honoring a slave owner in front of City Hall will also be removed, Sheehan announced.

Questions remain as to where Chief Hawkins was during the most chaotic weekend of civil unrest in recent memory.

Hawkins landed the $145,000-a-year job in 2018 following a 28-year rise through the ranks of the Southfield, Michigan Police Department. Following pressure from local reporters, Hawkins finally admitted he was away for the weekend of the initial protest and commanded his department’s response from a distance. However he has yet to explain his reasons for staying out of town while events escalated. When asked by Albany Proper at Monday’s protest if the destination involved a flight, he refused to provide an answer.

An Albany Police Department spokesman did not respond to requests from Albany Proper for comment or insight into the department’s use of force policies.

Following Albany’s unrest, the neighboring cities of Schenectady and Troy, which had an estimated 11,000 people attend one protest this past weekend, had demonstrations that ended with no force and no incidents. In both cities, police officials met with organizers. In Schenectady’s case, some officers even marched alongside protesters.

Despite there being days between the two events in Albany, Hawkins blames the different results on neighboring cities having more time to prepare for their protests.

Residents of the Mansion neighborhood in Albany are still reeling from last weekend’s unrest in the South End. A petition started by one resident has already gained nearly 2,500 signatures calling on Sheehan to ban the use of military tactics in Albany neighborhoods. Lily Mercogliano launched the petition after waking up early Sunday morning to find her house filled with gas while her three children were sleeping.

“Banning the use of militarized police response is a necessary step towards protecting our neighborhoods from police violence and protecting the right to protest in this city- particularly when unjust policing is at the center of the protests,” the petition states.

Maria has been discussing it with her neighbors in the Mansion neighborhood and she believes the topic of police reform isn’t slowing down anytime soon.