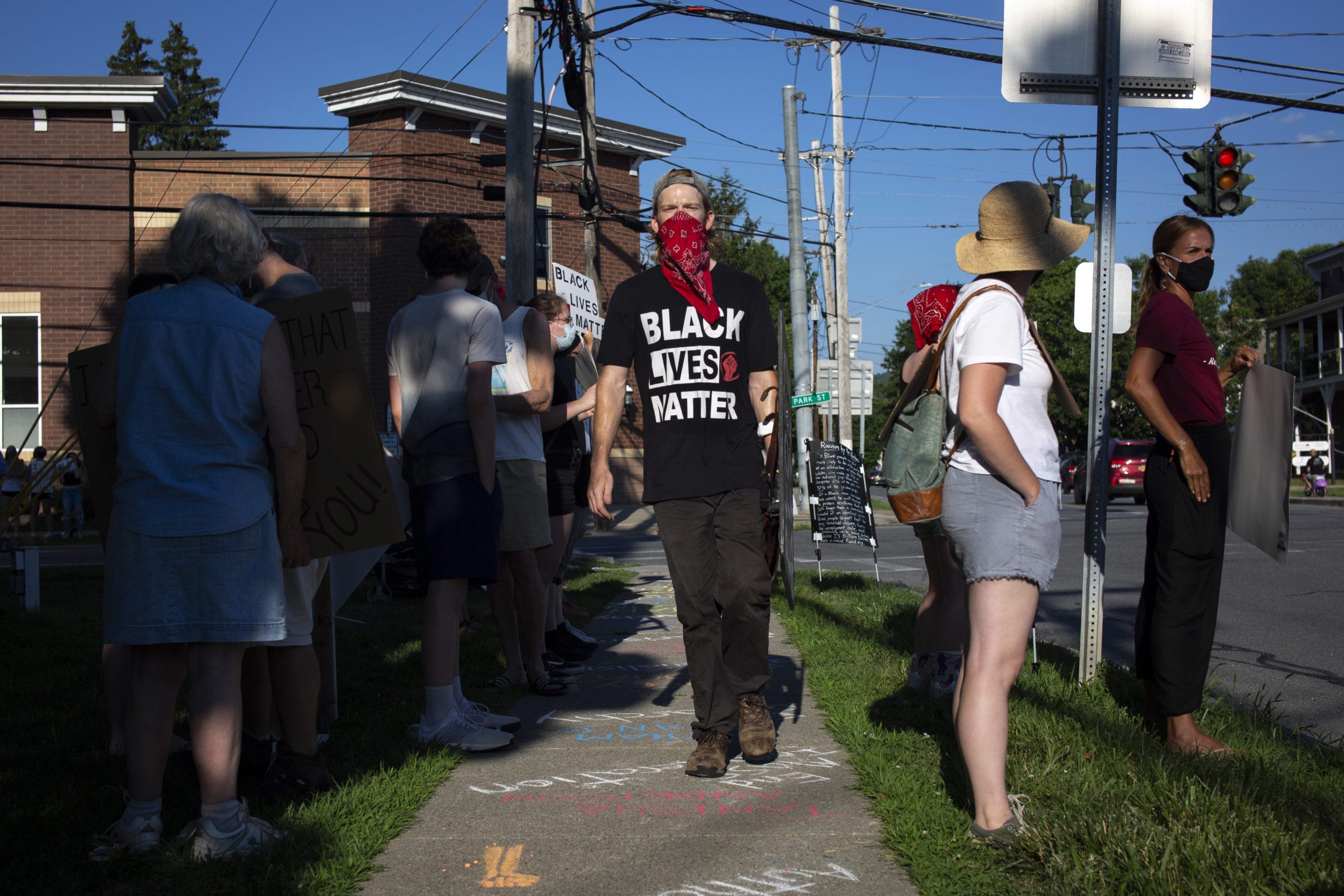 The directions to a recent Black Lives Matter protest in the rural Capital Region village of Cambridge were simple: “Meet by the traffic light.”

Travel 35 miles outside the city of Albany, through the rolling hills of Washington County and into the small farming community of 1,800 people, and you’ll see more American flags than street signs.

It’s here where a small, dedicated group of white residents have led peaceful Black Lives Matter protests that have been met with drive-by middle fingers and divisive name calling.

Weeks ago, the first protest had only a handful of people standing vigil. Since then, they’ve grown to nearly 100 people showing up in support of the movement. They come from neighboring towns and represent all age groups. Most of them know each other.

Despite the growing numbers, organizers also say they’ve been unable to get the Cambridge United Presbyterian Church to allow them to congregate on their lawn — where a sign out front reads “all are welcome”. The church did not respond to a request for comment.

For this small town of mostly white residents, the Black Lives Matter movement is no walk in the park. However, the supporters here see it as just as important as anywhere else.

“Just because we may be a white rural town doesn’t mean these things don’t touch us,” said Kris Nolan-Parker, one of the local Black Lives Matter organizers. “White kids will leave town eventually and will take their prejudices with them.”

Less than 1% of the Cambridge population identifies as Black, according to Census data. About 95% of village residents are white.

Washington County isn’t much different: Only 3.5% of residents are Black.

Local resident Mia Watkins says these demographics are evident in the Cambridge Central School system, where their athletics are known as ‘The Indians’, a reference to the original inhabitants of what is now present day Cambridge. Efforts to change the name stalled a few years ago.

She says her son and daughter, who are Black, have witnessed racist language used by classmates who she believes don’t know any better. Her 12-year-old daughter Veda Brandow described the sadness she felt after hearing a classmate use a derogatory term towards one of her friends.

Since the Black Lives Matter movement has spread across the country, Veda has changed her phone background to a photo of George Floyd. She arrived at the protest with her mom and brother Gage carrying a handwritten sign of Martin Luther King, Jr. quotes she found online.

Nolan-Parker says she also witnessed racism and cultural insensitivity. After growing up in Cambridge, a place she describes as “insular”, she moved to Chicago and realized she hadn’t been taught the language for equity work.

She says friends now ask her why she would come back to re-settle in her small hometown after gaining more diverse perspectives in larger cities.

Carman Bogle, the third-term Republican mayor of Cambridge, recognizes that despite the town being predominantly white, there are still people that she represents that have experienced racism.

“Just pretending it’s not here doesn’t make it go away,” she said.

Mayor Bogle hasn’t appeared at any of the recent Black Lives Matter protests in Cambridge. “Protesting isn’t really my style,” she said, emphasizing that she supports those that do protest and has worked with town and state police to prepare for extra staffing when they happen.

Priscilla and Jerry Cutler are no strangers to social action.

Entering adulthood during the Civil Rights movement, Jerry described segregationist politician George Wallace as leaving the biggest impression on his activism. He sees similarities between the rhetoric and policies of Wallace and the Trump administration.

The pair also described the difficult conversations they’ve been having with their friends recently, some of whom “don’t want to admit that there’s an issue.”

“I couldn’t stay silent,” Priscilla said. “I had to say how I felt.”

Jerry believes the country has been racist since the days that Native Americans were pushed out. He sees this lingering racism as being more prevalent in rural areas like Cambridge.

“We have this inflated sense of rugged individualism,” he said.

The pair, who are in their mid-70s, have attended more than one Black Lives Matter protest in the area. They believe that the protests in Cambridge will help amplify the movement.

“It shows that there are people that care instead of sticking their heads in the sand,” Jerry said.

A large red pickup truck idled in front of the protesters.

Inside, the driver lowered his window and shouted “all lives matter” followed by a derogatory term to refer to their intelligence. After protesters responded by starting their first chant of the evening, he announced he would be back and sped away.

The man was Sirell Fiel, a local resident and vocal supporter of President Trump. When he came back, he was carrying a giant cardboard sign displaying the same “all lives matter” message written in black marker. Protesters were quick to point out he used the back of a cardboard shooting board with a black silhouette target. He claimed it was all he had laying around his house.

Sirell was joined by his son as they walked up and down the sidewalk, shouting their message and challenging the protesters with questions. They wore red ‘Make America Great Again’ hats and American flag decorated shirts. He repeatedly called Black Lives Matter a racist movement, asking the crowd if they would label him a racist if he held up his fist and shouted “white lives matter.”

After nearly getting his sign ripped in half by a teenage girl, Sirell and his son retreated across the street, where they were joined by two more men who arrived barefoot. They leaned against bags of mulch alongside Noble Ace Hardware and kept their gaze on the protest from a distance for the remainder of the evening.

In an interview with Albany Proper, Sirell described his fears of a race war coming to Cambridge. He believes the Black Lives Matter movement is a “one-sided war” that is “dividing the country day-by-day.” He grew increasingly agitated as he spoke about the protest in front of him.

Mayor Bogle also spoke about fears she heard spreading around town that buses of “outsiders” were going to attend a recent protest, and in response she asked police to watch the roads for their arrival. She said she was worried about some arriving with “non-peaceful intentions.”

Meanwhile, asked what kind of world Sirell wants for his son, he said “one where it’s not divided by color.”

Gordon McQuerrey, a 27-year-old Cambridge resident, says he has only experienced physical confrontation at the more rural Black Lives Matter protests he has attended, including here and just across the border into Vermont.

That doesn’t stop him from joining his neighbors in vocal support of Black lives, where he wrote the names of victims of police violence using sidewalk chalk and led chants without the need for a megaphone. The names included Darryl Mount, a 21-year-old Black man who died from injuries he sustained during a foot chase with Saratoga Springs police officers in 2013.

“We’re here to draw evil out of our own town and create as stark as a contrast as possible,” he told the crowd.

As the evening carried on in Cambridge, a man approached the crowd to voice his opposition to the movement. Gordon saw it as an opportunity to educate a member of his community. He spoke to the man at length about his concerns regarding Black on Black crime and asked him to focus instead on root problems. He describes this tactic as making it “less about the content of the conversation and more about the context.”

Mayor Bogle is counting on what she describes as the “bond of neighbors” to help them navigate racism issues. “At the end of the day, anytime we have something happen in this community, we come together,” she said.

In the end, Gordon shook hands with the man before he peacefully left the area, hoping that he left with a new perspective.

“There are still common threads,” he said.