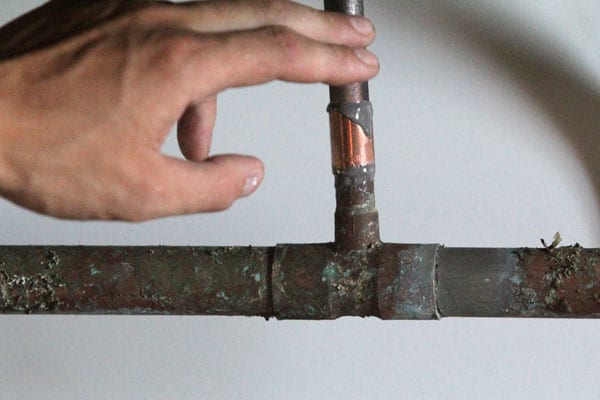 Memories of Valentine’s aren’t flushed away In keeping with the seven stages of grief, most Albany alt-rockers have reached the end — acceptance. Valentine’s Music Hall and Beer Joint as they know it isn’t coming back and they’ve moved on to The Low Beat. The brick building on New Scotland Avenue that once rattled with their favorite shows will come tumbling down. They’ll never stand over the same urinal trough again.

But for some the memories can live on with little pieces of Valentine’s scrounged up before the doors were locked.

“What’s the one super iconic thing that nobody will want?” Chris Jordan recalled asking himself. “I wanted the trough.”

It was no easy task. It took a couple of trips to get the right tools for the job and a few industrial cleanings. “Before I even put my hands on it I bleached the shit out of it.”

One bleaching wouldn’t bring comfort to those experienced with the trough. Once back to his home in Pittstown, it got doused in kerosene before another bleach bath. The process was a delicate balance of sanitation and historical conservation that had the approval of his understanding girlfriend and fellow music-lover Kim Neaton. “I really wanted to preserve the ring of scum,” he explained. The ring is just one of the elements of the trough that could have gone unnoticed in the dark pit of a bathroom. With the help of a few PBR’s one might overlook, and overshoot, the beauty of the trough. It takes some warm country sunlight to fully realize the instrument. The off-color edges. The tattered punk stickers. The subtle black paint trim that dripped from the walls.

Chris remembers playing hardcore shows at Valentine’s since he was a teenager. Now, with his band The Slaughterhouse Chorus, they remember it as an iconic institution where they formed. “For us it was the holy grail.” So when it came time to bring the trough home, he knew it would still support his music. It became a record shelf. But according to Chris, vinyl records weigh a lot more than pee. It took more work to drill holes in the metal frame and properly mount it on the wall. Seven hours of labor in-all. The final touch of adding the “skanky drip bar,” as he described it, levels out the feng-shui of his new listening station and keeps it up to code. But the upcycled furniture isn’t done yet – he is worried that the exposed wires aren’t “ascetically pleasing” alongside the pisser. Reactions from friends online have been mixed. “YESSSS. YOUR HOUSE IS NOW A CASTLE” / “I’ve thrown up in that thing. At least twice.” / “If I happen to be drunk near this ‘shelf’ I may pee in it.”

But in the end, the pair has accepted their new living room with open arms.

“We made out like bandits,” boasted Chris, as he picked some Jerry Lee Lewis from his new shelf.