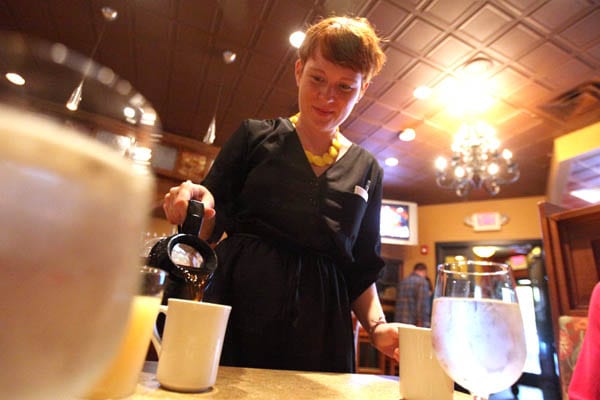 Petite, Pretty, and Positive: An Interview with Donna Baird Note: this interview is part of a series done by St. Rose students in Daniel Nester’s ENG251 class. Meet Donna Baird, waitress at Café Madison, as interviewed by Quinn Burch:

Is Café Madison the first job you’ve had since you moved to Albany?

I’ve never let the term “waitress” or “server” define me. I’m a musician by trade. I play the horn, trumpet, and trombone in multiple bands in the region, and I sing in a number of area projects. It’s where my heart is.
My first paying job was when I was a sophomore and I started working at a young women’s clothing store in the mall after classes. I was good at the job because I like being nice to people, and I like clothes. Eventually, the mall environment started to break my spirit, so I quit after a year.
Shortly after that, my friend and roommate Amanda started cooking at a place on Lark Street called A Taste of Greece. She got me a job waiting tables there. Amanda and I lived just down the street, so we walked to work together, opened the restaurant for lunch and ran it, just the two of us—I did the serving, she did the cooking. I worked there over a year, until it started to conflict with my schoolwork.
Then I started working weekends at a vintage boutique/antique store in downtown Troy. This was a dream job, and the people I worked for were truly lovely and appreciative. At times, it was just me in the store, surrounded by old, beautiful, and sometimes strange things. I collect useless pretty trinkets and gaudy baubles. Eventually I needed more money, so I started at the café.

You must really enjoy waitressing at such a hot spot. What’s the atmosphere like?

The café has a cozy, welcoming atmosphere.
Many mornings we’ll get doctors and nurses who are just getting out of their overnight shifts, business people trying to fit in quick meetings before going to work, along with regular people just looking for a good breakfast with friends or alone. It’s also a nice place for young families to bring their children.
I’m surprised at how frequently I serve people who live far away—from places like California, Colorado, Idaho, and even Russia, Italy and Spain. I always ask them why they decided to stop at Café Madison in Albany. They all say the same thing: they read our reviews online: Yelp or Urban Spoon, and knew they had to stop. They say they’ll remember us for when they come through again.
Our customers show how grateful and happy they are to be there. They make the job a pleasure.

What do you think about the Cabaret Laws?

I don’t think it would affect Café Madison. We don’t have room for live music. As it stands, I believe Albany County law allows bars to remain open until 4am. I have a feeling there is more to Albany’s crime rate than people enjoying live music.

Our weekend brunches are phenomenal. We have a different menu every weekend and our behind-the-scenes staff works hard to bring something different and interesting every week. My favorite was the espresso-creme stuffed French toast drizzled with dark chocolate. One weekend, we served deep-fried jalapeno polenta balls with our homemade cheese sauce.

What’s your personal view about drinking alcohol, especially in order to reach inebriation?

I have always enjoyed drinking because I genuinely like the taste of alcohol, dark beer in particular.
As for people who have love affairs with getting drunk, especially some people’s affinity for getting wasted on gross beers like Keystone Light: they’re definitely not drinking it for the flavor.
Drinking has an ability to turn off the annoying and stressful brain chatter about work, relationships, or personal shortcomings. I think that’s at the root of people’s belief that drinking is fun. It holds a lot of truth with me and I think many others would agree. I think it’s okay to want a few drinks in order to relax. However, having more than a few drinks can break down walls, like common sense and discretion. People lose their inhibitions when drunk. Unfortunately, I don’t think there’s a true remedy for this problem. If you surround yourself with good people, and become drunk, the worst that could happen is some really bad dancing.

I read that one of the waiters calls the table at the front of the balcony the Mayor’s Table? Does the actual mayor come to eat at Café Madison and sit there so he can people watch?

This question makes me smile. I can see why it would have that name. That particular table is our biggest table and its right at the front of the restaurant. Let me take this opportunity to invite Mayor Jerry Jennings to Café Madison—we have a table waiting for you!