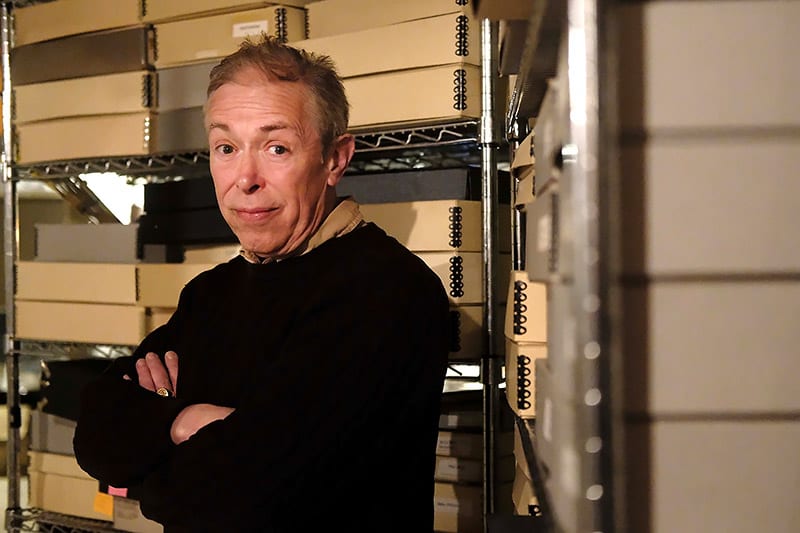 Photographer Mark McCarty on getting metaphysical

Mark McCarty has never worked a day in his life. That’s by his own admission, and his large catalog of work doesn’t back it up.

The fact is, since 1979 he’s had a successful business working independently as a commercial photographer out of his Troy home and studio. The client list on his website goes like this: “Mark has worked with many, many clients.”

But what I was most interested in for the February newsletter was a break from his commercial work. This month we celebrate Valentine’s Day, and I’m focusing on what it means to photograph your loved ones.

Mark knows this well – he turned a whole series of intimate portraits of his wife in to a book titled ‘Cara Mia‘, and currently has selections from his ‘Skin’ series on display at Union College’s Crowell and West Galleries in the Feigenbaum Center for Visual Arts through March 12.

// Traditionally with photojournalism you’re taught to photograph strangers, not people that you’re close with. With fine art portraiture you’re able to break those rules, and you do. How did your series come to be?

I remember two quotes from when I was just starting out as a young photographer in college. One was “photograph what you love”… if you’re going to do personal work make it personal is the gist of what I took away from it, and the other one was a Robert Capa quote: “If your pictures aren’t good enough, you’re not close enough”. The first one was pretty obvious, but the second one I started realizing that I kind of took that one a little too much to heart because my principle distance for photographing people is pretty much under three feet away.

// How do you approach your personal projects differently than your commercial work?

Even with the commercial work there is establishing a certain level of rapport and trust. My way of doing that is by making myself super vulnerable. Sometimes even purposefully fumbling with things, so that I don’t look too slick and I don’t look too imposing. I come at it with a lot of humility. I realize what I’m expecting from my subjects is exposing themselves to some vulnerability as well. If I’m not giving that back, then that’s exploitative at that point. Like they’re giving and I’m taking… I don’t want it to be that way.

// How important is it for you over your career to maintain personal projects?

Oh God, it’s the reason I went into commercial work — to be able to do fine art photography. I have to admit there were times when the commercial work totally sucked me in and made me forget that I had to be doing personal projects. The idea was always that I was doing this to support the art.

// Is there anything you learned about yourself, or your subjects that you were already close with, as you progressed with the series?

I think the main thing I’ve learned is everyone has pain. There are some people that just take it so courageously and without any complaint and still somehow manage to find joy. I think that is just so brave, so compelling. I’ve always been a sucker for the metaphysical and for the spiritual aspect of things. When you scratch the surface of people, you find that everybody has that kind of thing going on. Just like our pain… we don’t talk about it much, but everyone has got the spiritual thing going on too.

// What was it like working on the ‘Cara Mia’ series photographing your wife?

God Bless Mary Kate for putting up with this shit. She would be taking a shower and I’d come in yelling “don’t move the light is awesome!”. What I saw was the metaphor of water, and skin, and hair, and physical presence. But at the time, the water would be getting cold for her. She was so open to it. It was really about our relationship and about closeness and trust. It was also about the physical aspect of relationships. The hand on the shoulder, the kiss, cheeks rubbing against each other, walking and having her hair blow across my face. Things like that that are just about love.

// What has discovering all that meant for you personally?

It goes to the real basic of… why do we take pictures? Why is taking pictures such an exciting thing? I think it’s because you lose yourself. Anything you were worried about, it’s gone. It’s not important because you are in that moment, and that moment is all that matters. That’s the great thing about still photography. It’s about that fucking moment where everything else just falls away and the metaphysical just consumes every bit of you. Finding yourself while losing yourself.

// How do you separate living in the moment and your role as a photographer?

To some extent, interrupting the moment to take a picture can be more than disruptive, it can spoil the moment. That’s one thing that bugs me about Instagram. It’s like put the fucking camera down! Live this. So I guess for me, some of the intimate moments I photograph there’s a sense of me contriving that intimacy. Richard Avedon had a great comparison about the false intimacy of a photographer and it’s kind of like the relationship you have with your doctor. They’ve seen you naked and they know your deepest, darkest stuff. But there’s a certain professional barrier there that keeps it a little more abstract. I sort of went off on a tangent there. That was a really good question.

// It sounds like you know when to live in the moment.

// Is that why your portraits series are so abstract and up-close?

One reason why I’m so close is that to do something like that in real life is creepy. To stare at a drop of water running down your loved one’s back. To look at it and appreciate it, that’s nice. But to STARE at it is a little bit creepy. So if you photograph it, you can hold it and then you can really appreciate how all of the universe just came together in this one little moment.