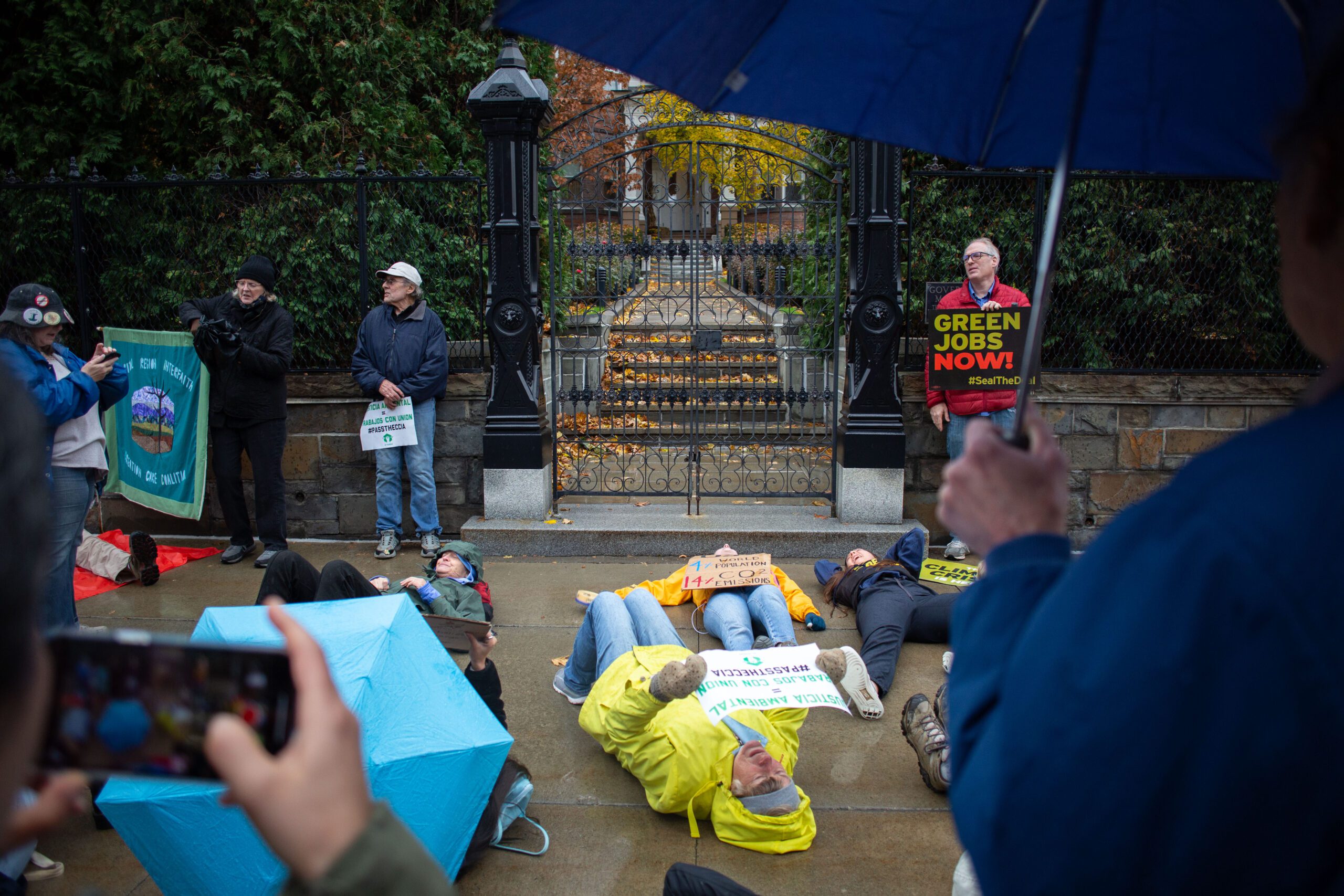 Pressure builds on Albany to address climate change next year

Despite pouring rain, hundreds of community members marched on the Governor’s Mansion this past weekend with urgent demands to address climate change through additional legislative action.

It also took place during a global climate summit in Glasgow. The nearly 200 countries involved in the talks ultimately came to an agreement to gather next year with stronger plans — leaving little comfort to those hoping the catastrophic problem would be solved anytime soon.

The rally at home was organized by New York Renews, a coalition of nearly 300 groups across the state. They are calling on the CIAA, which failed to pass last session, to be a priority when state legislators reconvene in January.

In addition to establishing pollution fees, the group says the bill would create good-paying green jobs and invest in local communities that have been most impacted by climate change. They are also calling on the state to fully fund the Climate Leadership and Community Protection Act (CLCPA) that was passed in 2019 to set a timeline for emissions reductions.

Earlier this month, Governor Kathy Hochul announced a new multi-year study on the impacts of climate change in the state that she says is a first step in “supporting the implementation” of the CLCPA.

But environmental advocates say the time for action is now.

“For far too long, environmental atrocities and racism have been committed against marginalized communities under the guise of the ‘free economy.’ Corporations that pollute our air and drinking water make billions of dollars by trading in our health for their profits,” said Maia Boswell-Penc from Green Faith and Capital Region Interfaith Creation Care Coalition. “Meanwhile, everyday people who suffer the most from environmental damage are also left to pick up the pieces themselves.”

Capital Region representatives Phil Steck and Pat Fahy are co-sponsors of the Assembly version of the bill. In the Senate, Neil Breslin and Michelle Hinchey have also signed on.

Steck, who was among the elected officials who attended the weekend rally, took to social media to underscore the bold action that a new generation of environmental activists are demanding.

Assemblyman John McDonald, a Democrat who represents the communities in Albany, Cohoes, Green Island, North Greenbush, Rensselaer, Troy, Waterford and Watervliet, says that he agrees with the “overarching goals” of the legislation, but is stopping short of co-sponsorship before he can clarify that extra fees won’t be carried over to the average consumer.

“To me it needs to be crystal clear that my constituents who are struggling will not be impacted and that is not specified in the bill to a measure of surety at this time,” McDonald said.

He is also seeking constituent thoughts on the bill through a poll on his website, and says he will be meeting with Citizen Action to discuss a way forward.

Assemblywoman Carrie Woerner, a Democrat who represents areas in Saratoga and Washington Counties, has not yet expressed a position on the CIAA but is the sponsor of a different bill to establish a clean fuel standard in the state. She had previously voted in favor of the CLCPA in 2019.

Meanwhile, Republican Senator Daphne Jordan, who represents parts of Saratoga, Rensselaer, and Washington counties, has spoken out against the CIAA. “Enacting the Climate and Community Investment Act would make NY’s gas tax at least 57% higher than any other state. This will only drive NYers OUT,” she wrote on Twitter.

Surrounded by a sea of umbrellas on Eagle Street, 17-year-old Miriam Eligberg, a co-director of New York Youth Climate Leaders, spoke about the frequency of climate emergencies — saying the legislature is now complicit in the “loss of life and possibility” for failing to act.

A large showing of young people echoed the concern. Some laid on the sidewalk as a ‘die-in’ form of protest.

“Currently we are missing the mark on taking action on the biggest fight in my life,” Eligberg said. “So look at me and the young people around the state and actually take action on ensuring our present and future.”