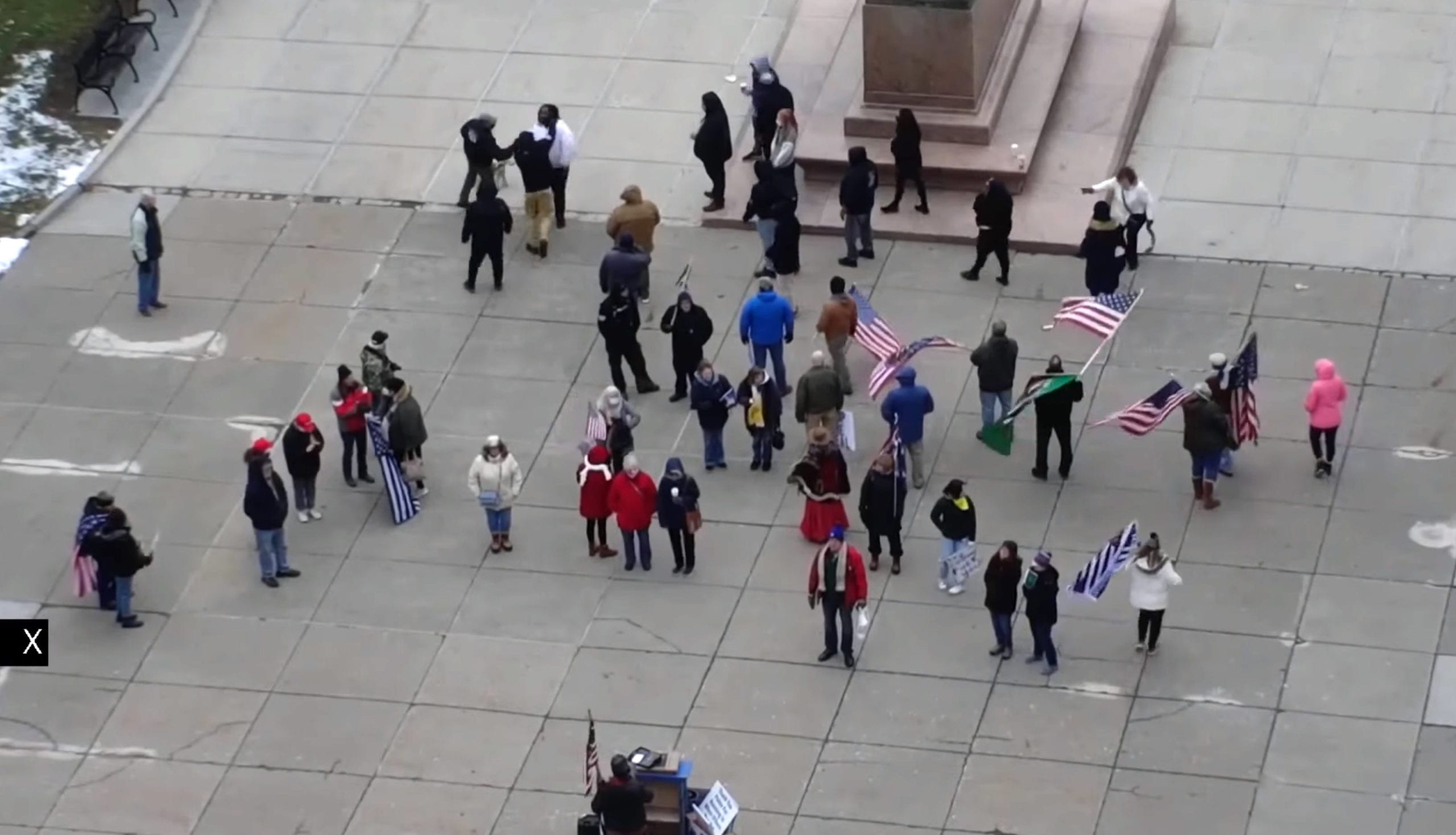 At around noon on January 6th a small group of protesters gathered in East Capitol Park in support of a nationwide call to “Stop the Steal”, a conspiracy theory being promoted by Donald Trump supporters regarding the presidential election results.

In attendance were local members of the hate group Proud Boys. On the right-wing social media app Parler, where much of the planning for Trump and “Stop the Steal” rallies take place, a promoter of the Albany rally later thanked the Proud Boys for “standing with them” and offered prayers for one of them that was injured. Another user commented in response: “We can not let this election be stolen. If that happens, we will carry out justice on these tyrants for the next four years. It will and should not be pretty. Nothing should be off the table.”

The Proud Boys are widely known as a white supremacist hate group that has been labeled a domestic terrorist organization by the Southern Poverty Law Center and law enforcement agencies across the country.

Video released by the Albany County District Attorney shows that violence began after a person wearing a yellow bandana, which typically signifies their association with the Proud Boys, punched a counter protester. According to the video and arrest reports, he was not arrested. Counter protesters say this man was also using a taser.

An all-out brawl then follows, and Alexander Stokes Contompasis is seen rushing to the defense of numerous counter protesters. At one point, two Proud Boys are punching and kicking a counter protester on the ground when Contompasis pushes them away. One of the men then walks away holding his side after what appeared to be the result of a stab wound. Seconds later he returns to the scuffle. He later retreats to a park bench where he is treated for his wounds. One of the two men stabbed at the event later admitted to police of their affiliation with the Proud Boys.

For his role in the altercation, Contompasis is being charged with a high-level felony. He is arguing self defense.

Only one pro-Trump protester was arrested. 66-year-old Colin Dermody, of Loudonville, was charged with a violation for striking another person with a flag pole. It’s unknown if Dermody is affiliated with the Proud Boys.

In video taken by Darrell Camp, a reporter for right-wing talk radio station WDGJ, police can be seen arresting two other local Black Lives Matter protesters shortly after the violent incident was quelled.

In one video, local Black Lives Matter organizer Alexis Figuereo is seen on the ground being detained by multiple officers. In an interview with Albany Proper, Figuereo says he was arrested 30 minutes after the stabbings, which he was not present for. He says two of the State Police officers used controversial knee-to-neck restraints on him and caused a bruise on his face and injury to his wrist.

While Figuereo was being detained, another counter-protester is seen arguing in his defense. At one point as things escalate a State Trooper pushes the man, Brandon Brown, to which he responds with a push back. He was then immediately arrested and charged with obstruction, resisting arrest, and harassment. While on the ground, Brown yells in pain as the officers force his hands into cuffs.

Brown and Figuereo are both vocal Black Lives Matter activists in the region. Figuereo, who is often contacted by the media for quotes related to events he organizes, says no major local media outlets have contacted him about what he experienced last week.

While the nation is coming to terms with the violent extremists that sought to overthrow the government, local news reports have not been sympathetic to those that face the same groups at home, focusing instead on self-associations with “antifa”, an unorganized movement against fascism that often aligns with the Black Lives Matter movement and dominates the minds of Trump supporters.

According to the Times Union article, which relies heavily on the account of a self-acclaimed Proud Boy, a “skirmish broke out that started when an apparent Antifa supporter punched one of the Proud Boy members in the face.”

The Times Union also notes that members of law enforcement were “undercover” at the rally, monitoring the situation and witnessing the counter-protesters “allegedly instigating the confrontation with the Trump supporters.”

While the surveillance video doesn’t capture words spoken between the sides, it clearly contradicts the account of law enforcement when it comes to who threw the first punch.

“I believe that when the facts of this case come out, it will show that my client was defending himself from an unprovoked attack by self-identified Proud Boys, a radical racist organization,” Melissa A. Carpinello, lawyer for Contompasis, told the Times Union.

Figuero says the incident in Albany is an example of the Proud Boys presence in the area.

“Some people don’t realize that it’s right here in our backyards. Some people think that this is a thing that only happens in Portland, is only happening in DC, only happens in Minneapolis… but it happens everywhere,” he said. “It’s here too. They’re definitely comfortable.”