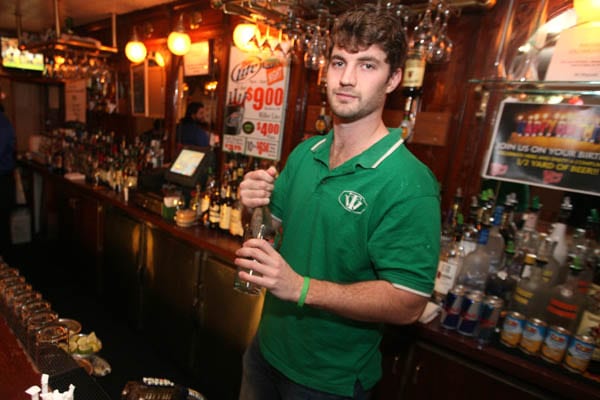 Shut Up and Calm Down: An Interview with Mike Caplan of Washington Tavern Note: this interview is part of a series done by St. Rose students in Daniel Nester’s ENG251 class. Meet Mike Caplan, bartender at Washington Tavern, as interviewed by Danielle DeMichele:

I work in a daycare where I have become very accustomed to children peeing on themselves or vomiting everywhere, do you get a lot of that at the bar?

Not a lot, no. Probably once every couple of months someone will throw up in the bathroom, but not a lot of people are peeing on them or throwing up in public.

Well that’s a relief! It seems that both of us work in a field where crazy ridiculous things happen each day, what would you say is the craziest thing you have ever seen while at work?

Man, this is a tough question. Someone sprayed pepper spray in the bar trying to clear it out. That was crazy. Also when the cops spray people with pepper spray in front of the bar, that’s pretty crazy, too.

The daycare I work in has been open for the past 35 years. That’s peanuts compared to the 127 years that the Washington Tavern has been open! What would you say are some of the perks of working at one of the longest standing bars in Albany?

I would say the advantage is that you do not have to worry about the place going out of business. Several bars have recently gone out of business in Albany.

What are some of the lessons you have learned working in a bar?

How not to act! [chuckles] Definitely what not to do while in a bar, don’t call the bartender over while he’s busy, don’t whistle at them. Bar etiquette.

If you owned a bar in Albany, what would you name it?

I would name it the Washington Tavern [chuckles]. No, I would name it something related to beer and serve only the highest-end beer to keep out the riff-raff.

If I owned a bar, I think I would want it to be full of crazy college kids who would tell all of their friends about the awesome time the had at my bar. What kind of crowd would you want to appeal to?

A lot of bars in Albany have gone down because they’ve gotten the wrong element and no one wants to go there anymore because they’re all afraid. I would price high to draw in a nicer crowd.

I recently read an article about the Cabaret Laws passed in Albany, can you tell me about them?

You can’t have live music after 2 pm. I know that there have been a lot of issues with who gets a Cabaret licenses There’s a new bar that opened downtown and they pulled a fast one on Albany, made it look like it was a restaurant but then all of a sudden they’re a downtown college bar. I feel like something had to be done to quiet people down after 2:00 in the morning but I don’t know if it was done correctly.

Do you agree with the extent that they we going to with the laws?

I think it depends on the neighborhood. If you’re in an area where there are a lot of people trying to sleep then yeah, something needs to be done, but I think a lot of it is a result of kegs and eggs two years ago. It’s been completely different because they not want to have to deal with these problems anymore.

Another law that they have is that any person under the age of 21 must leave venues serving alcohol by 11:00pm. Do you think that’s fair?

I think it’s depends on the venue more than anything. If you’re at an upscale restaurant that serves alcohol, why should you have to leave at 11? But on the other hand, if you’re at a club and you’re there underage after 11 then you probably are going to drink and get into trouble.

Could you ever actually see yourself owning a bar someday? I know I definitely couldn’t.

No I couldn’t. You have to be on top of your game at all times. You have to deal with the problems of violence, theft, the State Liquor Authority. It’s a big headache to own a bar especially if you want to make it a successful one in Albany. I could never own a bar in Albany.

I know that Albany Mayor Jerry Jennings is a supporter of Washington Tavern. Have you ever served anyone famous or high up in Albany?

The Hanson Brothers came in once. Paul Tonko, the representative, comes in sometimes. I think that’s about it.

I’m a huge fan of Washington Tavern and Bombers, what is your favorite bar to go to in Albany when you’re not working?

The Pump Station. I really like the beer there.

What bothers you the most while working?

That sounds like a typical day at my job as well. If you could say anything to those customers what would you say?

Probably shut up and calm down [chuckles].