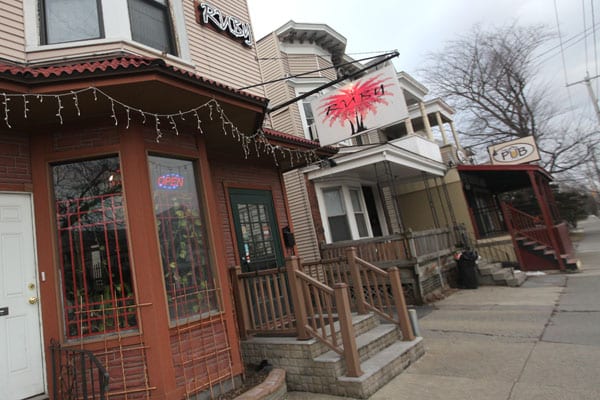 Walking the Dog: An Interview with Kevin of Ruby's Asian Bistro Note: this interview is part of a series done by St. Rose students in Daniel Nester’s ENG251 class. Meet Kevin, Waiter at Ruby’s Asian Bistro, as interviewed by Danielle Shine:

So here I am on your daily dog walk while you’re off duty from your job at Ruby’s. Thank you for inviting me on this walk through scenic Washington Park with you and Jackie. [Kevin looks to his 3 month-old Jack Russell terrier, Jackie, with admiration]. She looks so young.

Yes, I got her in August.

It makes me miss my dog back home…his name is Sunny Shine and very similar to Jackie in size and energy level.
Has Albany been your home your whole life?

What is your opinion of Albany?

Really? I am from Long Island and coming here, it is a lot louder, especially at night.

Well, at my apartment, it seems to be quieter at night. Never too much commotion. I do not live near the college apartments.

Did you apply to Ruby’s, the Asian-fusion bistro of Albany? It’s known as a family business—are you in the family?

No, I did not apply. I am not in the family, but I know them and they offered me the position in May of last year.

Why did they ask? Where did you work beforehand?

Because I was out of a job. I always worked in restaurants. Ruby’s makes me feel younger because of the college crowd.

Oh cool. I used to work as a waitress in a senior citizen’s home in Ronkonkoma where I am from. It sounds as terrible as it was. It was difficult to make them happy. Do you ever deal with those customers?

No. They usually are college students, so if they are stressed or have something going on that I can tell. I will try to make them feel better with conversation or just serve them.

When I first came to look at Albany for college, I learned about Ruby’s from an undergraduate admissions counselor; she was on her way there to lunch with colleagues. So you must have somewhat of a mature crowd, right?

Not really. I mean, there are a few older customers who are regulars, but if you were to look at the whole range of customers who come to eat at Ruby’s it is definitely dominantly younger- aged people.

Yes, but it was one month before I started working there.

The signature drink served in Ruby’s is sake. What is it about sake that makes it unique compared to other alcoholic drinks?

Sake is a Japanese rice wine. Sake simply means “alcohol” in Asian countries and it is not the name of it there. It is not a wine but more or less in the whiskey category. The other type of Asian liquor is Chinese clear wine, but we do not serve it because it is not the popular drink. I personally prefer red wine.

What is the most ordered sake? When customers come in and order sake, do they know much about it?

The sweeter sakes mostly are the more popular ones among customers. I usually recommend what type of sake to order and they are usually trying it for the first or second time.

Ruby’s currently has a Facebook, Twitter, and Yelp account as well as a website. When I first moved here, my friends and I easily found your restaurant online and ordered before even knowing the city well. As posted on the website, you serve varieties of “Asian cuisine such as Thai food, Vietnamese food, sushi, sashimi, dim sum, and much more.” Which type of food do you think Ruby’s serves predominantly?

Ruby’s is predominantly a sushi restaurant. But we serve a variety of cultural food for the customers. If it was an older crowd, there would be a greater range in cultural food.

I have a sushi kit at home, but I cannot figure it out myself.

Well, these days I’d say check the internet… You can find anything on the internet. I’m sure there’s a manual.

What is the restaurant like on a Friday or Saturday night? Which of the two would you say is busier?

Friday or Saturday is somewhat busy compared to weekdays. Friday is the busiest, but there are always parties that the college students have to go to so. While it is busier on the weekends, crowds always revolve around the time of the parties.

Have you ever cooked or prepared dishes in the kitchen before?

No, I do not cook. I am not creative.

(While Kevin says he has never cooked before, last time I was in the restaurant eating, he brought us out brownies he had made himself, no charge, “just to try.”)