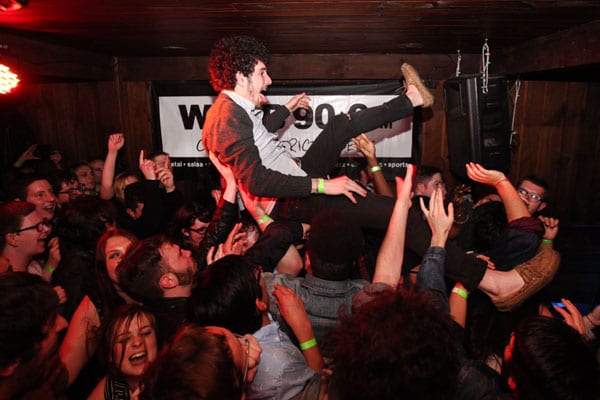 When most people turn 36 years old they’re home watching the kids. But the occasion of WCDB’s anniversary always promises to put on a raucous show in Albany even as the years pass by. Last night brought together not only current radio station students and alumni, but also two local establishments fighting to be known as Albany’s next hip neighborhood — The Low Beat, Howard Glassman’s new joint since Valentine’s closed, and old mainstay Pauly’s Hotel next door. The sold out show featured locals Secret Release and Slowshine, and touring acts Tweens, Pleasure Leftists, Cosmonauts, and Cloud Nothings. Cincinnati trash poppers Tweens had the most people dancing during their feel-good set at Pauley’s. (Listen to their debut album streaming now on Pitchfork) Unless you count the shoulder-to-shoulder flailing around during Cloud Nothings loud and unruly Low Beat set as dancing. They continue their tour with punk outfit Pleasure Leftists in Canada this week. WCDB lives another year, but does college radio ever really need to grow up?