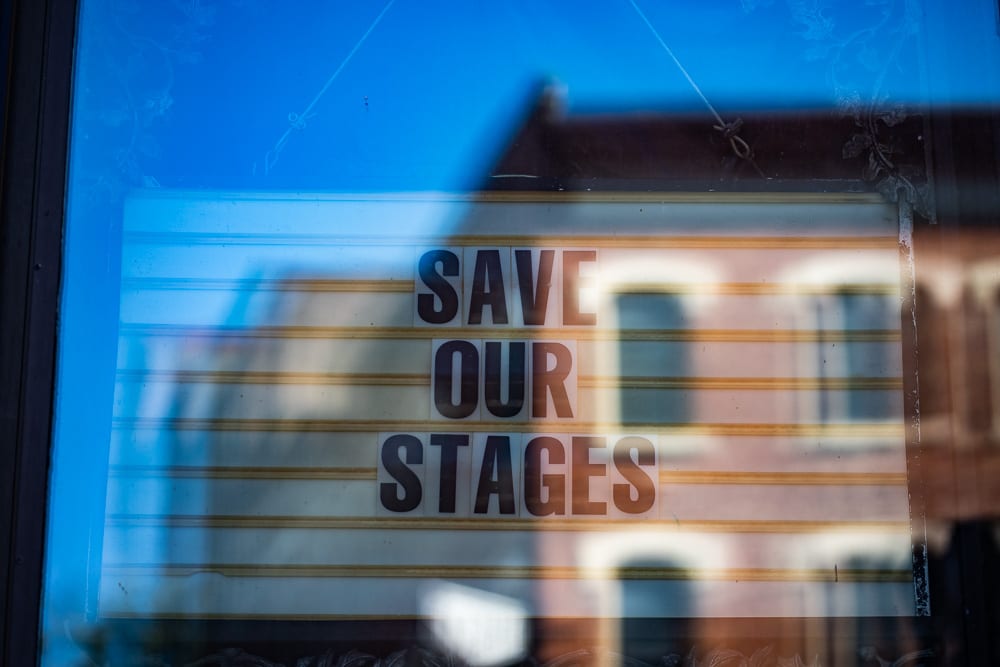 The constant never-ending stream of terrible news this year has taken its toll on so many people, their lives, and their jobs. One industry that has been gutted by COVID-19 has been the live music industry.

Pearlpalooza, the annual one day festival put on by Sugar Productions, WEQX, The Hollow, and the City of Albany, still took place last weekend. However, this year saw a Pearlpalooza like never before. Pearl Street wasn’t closed. There were no large gatherings of fans. There were no nationally touring acts closing the day out.

Just four local acts — Mirk, Victory Soul Orchestra, Wild Adriatic, and Eastbound Jesus — performed on The Hollow stage as it was streamed on Facebook and Youtube. These kinds of virtual concerts have been happening all spring and summer as festivals, bands, and venues look to pivot and keep the music alive.

We spoke with many of the musicians involved with Pearlpalooza this year. The general feeling of dread about the industry, but also happiness that this was happening, was a constant topic of conversation. Wild Adriatic and Eastbound Jesus were among the musicians that spoke about how they have been adjusting to the situation.

Dustin DeLuke, keyboardist for Wild Adriatic, was amazed at how much he has been recording lately. “I don’t remember the last time I was recording this much. It’s so easy to quickly get a piece out there to a band and throw ideas back and forth,” he said. While this is obviously good to keep the creative juices going it’s not sustainable when you want to be in front of people.

“The last time the four of us played together was in July and that was just a one day recording,” he said. “If we’re talking with an audience it was February and this is by far the longest break we’ve ever had”.

Most people look at the live music industry as being big stars flush with money, but they don’t think of the local crews, the ticket takers, the vendors, the touring crews, and others that help each and every show happen. The people who do these jobs are mostly lower to middle class people who do this work just like others who work in offices or grocery stores. It’s just another way to pay the bills. The live music industry isn’t all glitz and glamour — for smaller acts, everything is done just by the band members themselves as they slowly move up in the industry.

It’s not like you’re a band and all of a sudden you have an entire team behind you.

The day-to-day life on the road has been important to Wild Adriatic and its how they’ve built their fan base over the years. The band’s bassist Rich Derbyshire has really missed the road life and all that comes along with it. “Not being able to go to cities we have gone to for years and seeing some of our fans and just catching up has been tough,” he said. “Some of our biggest supporters have messaged us hoping all is well, but it’s weird that we don’t know when we will be able to see them again in person.”

Late nights are a staple of live music and Rich says it’s been hard to end that routine.

“Those late night van rides and having energy that keeps you up after a show has somehow stayed with me. I’m still sleeping on a schedule as if we are on tour. It’s just so hard to change that after almost a decade of being on the road.”

Both Wild Adriatic and Eastbound Jesus have thrown multiple music festivals in the Capital Region the past few years. None of those are happening this year.

“Early March is always the beginning planning stages of Eastbound Throwdown and we had just started reaching out to bands but we quickly had to stop all of that and wait. At first we thought we still had plenty of time, but as the summer went on we quickly realized it just wasn’t going to happen this year.”

Dylan Robinson, the band’s lead electric guitar player, added “it was beautiful to see the outpouring of love from the community when we cancelled it. We’re really disappointed to not be able to have it this year but our fans were really understanding.”

Mateo Vosganian, Wild Adriatic’s drummer, is gutted about The Summit not happening in Glens Falls this year.

“It really hurts that our little festival, which has been great the last few years, isn’t happening this time,” he said. “It was obvious, though, that there was no way it could happen since it takes place indoors in a hotel.”

Small festivals like The Summit and Eastbound Throwdown are important events for the music community — bringing in local vendors and connecting the Capital Region together. Yet again it’s one of those things that as a whole the country just thinks about the Coachellas and Bonnaroos of the world being impacted and not the local festivals that are left hurting too. The bigger festivals can survive a hit from a gap year, but these smaller local ones depend on revenue from every year to continue. Even if they happen every year, the next one is never guaranteed.

There are two bills currently moving through the federal government, The Restart Act (S.3814) and the Save Our Stages Act (S.4258), that are aimed to help the music industry recover. Despite the bipartisan support, the bills are still awaiting a vote. The bands and venues feel they are running out of time.

Carl Anderson, drummer for Eastbound Jesus, is thankful that the band isn’t the only way they pay their bills.

“We feel pretty lucky that we all have day jobs, especially right now, where we don’t have to rely on the band for everything,” he said. “We’re more concerned about all of the venues we play and the bands that make a living doing this. So many of our friends are really hurting as this is their entire livelihood.”

Travis Gray, lead singer and guitarist of Wild Adriatic, wants to get back on the road and start playing again but he knows that one thing needs to happen first.

“If everyone can just do step one and wear a mask then we can maybe get things under somewhat control and bands can get back out there and make a living.”

Both bands talked about the importance of supporting these small venues through donations or ordering food to make sure they stay open. Without these local venues, bands like those that played Pearlpalooza aren’t going to have a place to begin their journey.

NO RUSH, BUT CANNOT WAIT

Both bands are beginning to work on new material — but neither are rushing.

Adam Brockway, the lead singer and guitarist of Eastbound Jesus, has started writing new music. “I’m excited to start the wheels moving on new material, but we know there isn’t a rush.”

Wild Adriatic has slowly been tracking a new record, but it came to a halt once everything shut down in March. Both bands have been selling merch online to help with some bills, but it isn’t enough and both will be taking a financial hit this year.

While new music will be released soon, it isn’t the same.

“The streams are great and recording is fun, but that interaction with people just cannot be replicated,” Travis said. “I know every band and musician is feeling this, but I cannot wait to get back out there on the road playing for everyone.”