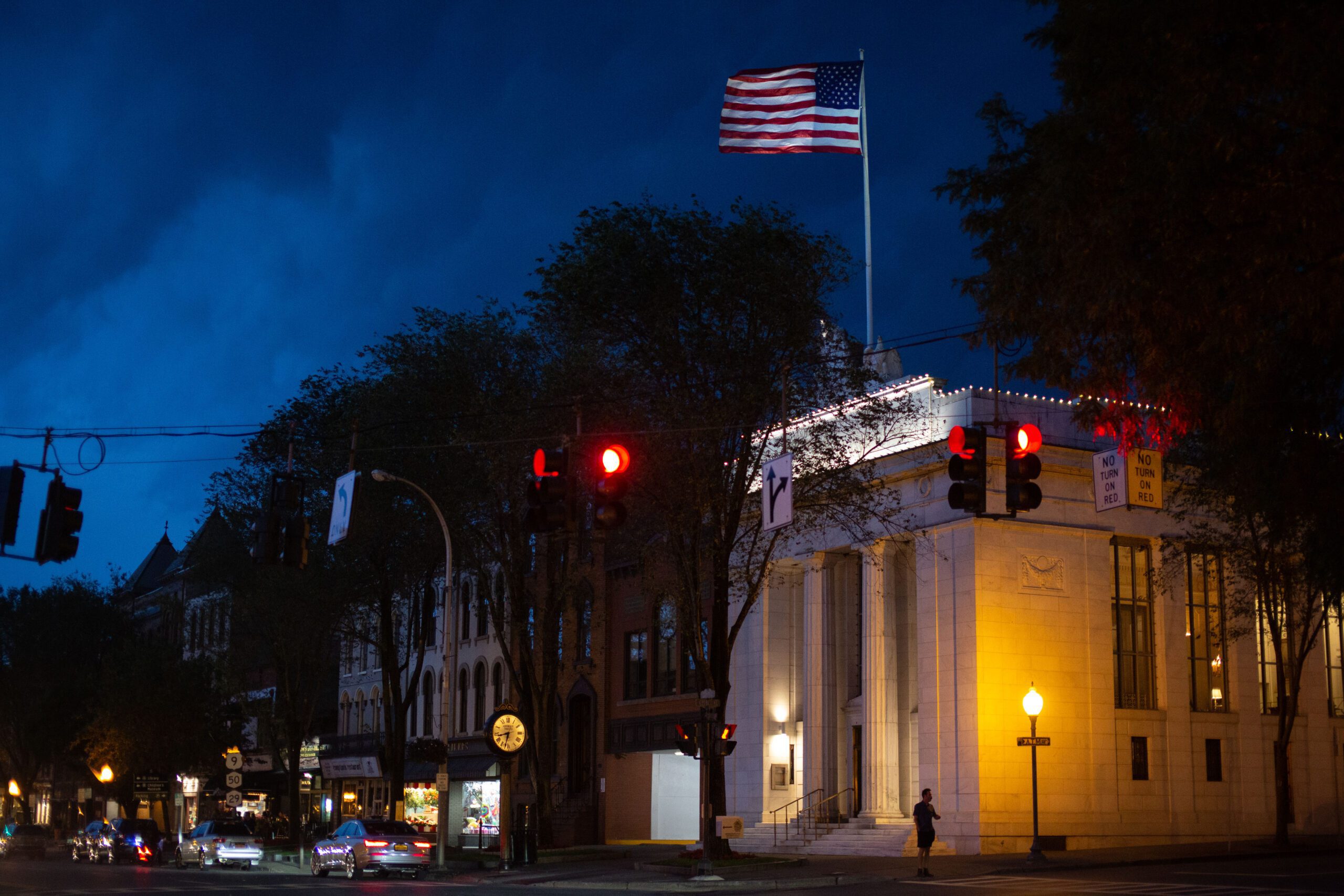 Sundown in the Spa City

The night before the 153rd season of Saratoga Race Course kicked off, police officers tackled and arrested Black Lives Matter activists on a downtown thoroughfare. 40 days later, after the final race crossed the wire and bettors left town, they set out to serve arrest warrants on more.

In the affluent horse racing community of Saratoga Springs, an increasingly focused effort has been made to silence calls for social justice. A battle over ‘outsiders’ has taken hold — often at odds with a city that relies on a billion dollar tourism industry each year.

Now, the most outspoken of the local activists say they are being targeted one-by-one with trumped up charges related to their involvement in non-violent protests in the city. The New York Civil Liberties Union has called it an “aggressive fear campaign.”

For some of the city’s Black residents, who account for 2.7% of the total population, the response has made them feel like targets in their own communities. Some have described Saratoga Springs as a ‘sundown town’ — a Civil Rights-era reference to the Southern towns that used formal authority or informal fear tactics to exclude Black people from their communities.

At a Saratoga Springs City Council meeting this summer, 21-year-old city resident Alexus Brown spoke about her grandfather nicknaming their hometown ‘Selmatoga’ due to his experiences with racial injustice.

Brown recounted her own experience following a protest in Congress Park where she said she was stalked by Saratoga Springs police. She was driving with her boyfriend Marcus Filien, who is also Black, on a dark street near her mother’s home. They waited to reach her driveway before pulling over, where she said police then searched their vehicle.

“When I asked what we specifically did to get pulled over, (the officer) said it was a criminal investigation so he couldn’t tell me any further information,” she said. “And if I wanted to know I could contact the police department and file a FOIL request.”

Filien, a student at Cornell University, was the driver. He said he was shaken after the search.

“The days following the incident, I just couldn’t get out of my head. Like I would try to go to sleep and lay down and the moment kept replaying in my head,” he said. “It’s just sheer fear and anxiety.”

While New York has made efforts to reform bail and re-imagine police practices, Saratoga Springs appears to be headed in an opposite direction after Assistant Police Chief John Catone used an official city hall press conference about an unrelated bar brawl to make politically and racially driven statements against the larger nation-wide Black Lives Matter movement. He called to action the “silent majority” and said that he will use his “130 years of family connections” to “stop your narrative.”

“You’re either with us or against us,” he warned.

Alexus Brown joined a chorus of people who fought back against what she called Catone’s “white supremacist dog-whistle.” She pointed to her own family having more than 150 years of family connections to Saratoga. She spoke of her grandfather Frederick Allen being the first Black employee of City Hall.

“I am standing here before you today because my ancestors had a voice but were not given the same opportunities that I now have,” Brown told the city council. “For that I want to thank them, because they built the bridge that carried me over to the other side.”

Catone is far from the first to use a city hall platform to speak out against Black Lives Matter.

In October of last year, former Saratoga Springs Police Chief Edward Moore took to the microphone during a Public Safety Committee public comment period. Moments before, Mayor Meg Kelly threw activists out of the meeting for speaking out of turn, displaying an authoritarian-like rule she’s enforced with unusual regularity against Black speakers.

“We are the people that pay the taxes that support this community. All of Us is none of us,” said Moore, referring to the Capital Region community action group All of Us.

“They don’t belong here,” he said.

An army of commenters, some anonymous and many themselves living outside of Saratoga Springs, now amplify the messages being sent by current and former city officials. They routinely set out to antagonize activists on their personal social media pages. They leave threatening “get out of our town” comments and compare the activists to animals — and in at least one instance, use the N-word.

Brown describes the stark differences in her interactions with people while working in downtown stores versus being involved in racial justice efforts in the city.

“They see me at work and they’ll be cordial to me,” she said. “But then if they see me on the streets, they’ll clap when I get tackled to the ground. So, it’s just disgusting.”

Despite this, Alexus Brown has followed in her grandfather’s footsteps and launched a community resource outside the building that bears his name. She selflessly feeds the city’s hungry by stocking the Saratoga Free Fridge at The Frederick Allen Lodge every Sunday.

‘OUR VOICE IS THE ONLY WEAPON’

Organizer Lexis Figuereo was recently pulled over while driving to his first day of college classes, a life accomplishment he celebrated on social media. He never made it to class. Instead, Figuereo was arrested by county sheriffs and handed over to city police in a gas station parking lot.

Shortly thereafter the mother of his children was arrested outside the police station when she responded to Figuereo’s call for help. A witness spoke to The Daily Gazette about watching that arrest:

“They ripped the stroller out of her hands, pinned her arms behind her, the kids were screaming. It was the most disturbing thing I have seen in Saratoga Springs. The only threat to those children was the police officers. It was hard to watch.”

Police added misdemeanor charges for Resisting Arrest and Endangering the Welfare of a Child after the arrest.

Alexander Patterson, a Clifton Park town board candidate, was arrested while delivering pizzas. He spent 14 hours overnight in a holding cell before being able to see a judge in the morning.

“I just looked up as I was taking food up to a door and two cops were calling my name,” he told WAMC.

Meanwhile, charges for Figuereo include two counts of misdemeanor Obstructing Governmental Administration for his heated exchanges that took place during two city council meetings this summer.

“I didn’t know it was against the law to go to a public meeting in a town that I lived in for 27 years,” he said at a press conference outside City Hall last week, addressing charges that he and other organizers are labeling infringements on their 1st Amendment rights.

During one of those meetings, Figuereo passionately spoke about being subjected to racial slurs online, to which Commissioner Dalton responded “Why do you have to make everything personal?” It immediately escalated the already volatile meeting. Four officers, one clutching his gun holster, then removed Figuereo from the chamber. Others followed him out.

Sangare said she believes the charges are a tactic to silence the Black Lives Matter movement.

“They are clearly trying to scare us,” she said. “Our voice is the only weapon we have.”

Immediately following the mass arrests, council members approved a five-figure budget to pay for professional mediation with the same activists they forced into holding cells one floor below. According to Figuereo, the future of that mediation is now in question. Among other things, he took issue with the hefty price-tag attached to it.

Last summer, after the sun set on protesters who had previously gathered in Congress Park to counter a right-wing rally, a large line of officers in combat fatigues and armored vehicles descended on the group. They chased them on foot and horseback, firing pepper bullets at the retreating crowd — three people were arrested in the chaos.

Saratoga County Sheriff Michael Zurlo was seen earlier that day greeting and laughing with the crowd waving Donald Trump and Blue Lives Matter flags in the park. One of the groups behind the protest was Liberty Bell Alliance, whose founder Bill Tryon was later arrested and charged with participating in the insurrection at the United States Capitol on January 6.

The rally, dubbed ‘Back the Blue’, was largely in response to a growing activist movement which had been outspoken in support of Darryl Mount, a young Black man who was involved in a police foot chase in 2013. He died nine months later as a result of serious injuries that his family claims came at the hands of police officers. Former SSPD Chief Greg Veitch admitted in a court deposition that he lied to a reporter when he said an internal probe found no police misconduct.

Activists have since taken to the streets and to City Hall meetings to demand justice for Mount and to bring attention to other issues of racism they see in the city. The public comment period of the city meetings have at times devolved into shouting matches between council members and activists. Mayor Kelly has used her gavel with such force that Commissioner of Finance Michele Madigan, who sits next to her, winces in pain and covers her ears.

As tensions boiled over this summer, a line of officers again descended on a crowd of protesters on Broadway. They chanted “MOVE BACK” in unison as revelers along the sidewalk cheered on the police formation as if it were a day at the races. Five protesters were arrested.

Among the community members watching along the sidewalk was 14-year-old Italia Sephas and her father Andrew Sephas. They were both born and raised in Saratoga and her father, who is Black, sat on the city’s Police Reform Task Force. His daughter began filming from the sidewalk after seeing the police storm protesters, calling the reaction “completely horrendous.”

She said the police response has led her to believe that things may get worse in Saratoga before they get better.

“Is there going to be gold or coal in the pot at the end of the rainbow?,” she wondered.

The Saratoga Springs Police Department is now publicizing videos in what appears to be an attempt to influence the court of public opinion. They’ve instead done more to stoke the fire on Facebook.

In one video, an unidentified man calmly sits in his car as a small line of protesters stand in front. He tells the police dispatcher he is being kept from heart medication at home, but it isn’t clear from the videos if he ever makes this known to any of the protesters on the ground.

“I’m not going to run them over because that’s illegal,” he tells the police.

A fundraiser for activists arrested in Saratoga is being held on Sunday, September 26th at 3pm in Congress Park. Donations can also be made at the Saratoga Springs Civil Rights Activists Legal Fund.