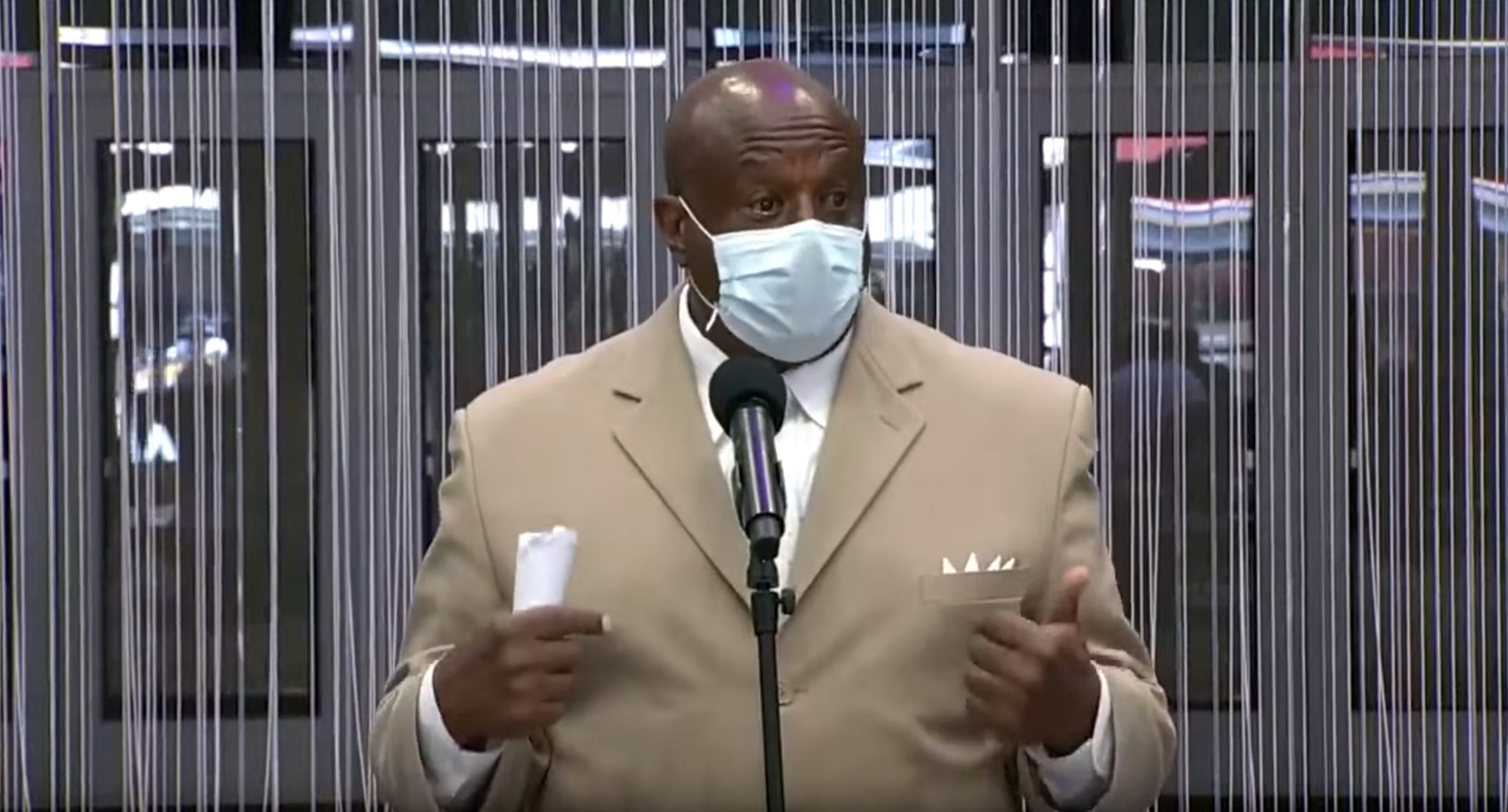 The retired police chief fighting for reform in Albany

Frank Wiley recently retired as the Chief of the University at Albany Police Department where he led the department for 24 years. He recently spoke to a group of local law enforcement and elected leaders inside the Times Union Center as protestors gathered outside locked doors demanding to be heard. Inside, many of the systematic issues Wiley spoke about were being echoed outside by members of the community.

Here we offer you a chance to watch what he said that day, and Albany Proper caught up with Wiley for an interview which is presented here and lightly edited for space:

// You recently retired during nationwide calls for police reform and are now speaking out about these issues. How does this all feel to a former police chief?

When I announced my retirement months ago I didn’t know that I would be leaving at such a turbulent time. Frankly there is both satisfaction and frustration.

I am satisfied that we were able to implement, many years ago, a comprehensive model of progressive policing that includes many of the elements being suggested, demanded and recommended now. I am frustrated that despite the implementation of a comprehensive model of policing, the best that it has accomplished is that our approach caused less harm rather than ultimate good.

I hope that I can contribute further by sharing what I have learned with the aspiration of contributing to the process of dismantling fundamental unfairness and inequalities.

Growth, both practical and academic, had provided a much more data driven, mature and sophisticated view of law enforcement. Michelle Alexander (author of The New Jim Crow) unequivocally demonstrates that there exists law enforcement activity which contributes to socioeconomic inequality and wreaks havoc on fairness.

// Do you believe policing is to blame for some of these inequalities?

There was a study conducted in response to the Rodney King beating by Harvard Law School which concluded that there is an “inseparability of race and policing in the United States”.

It is no surprise to anyone that Black people are over-represented in the criminal justice system. The effects described by Michelle Alexander are devastating. The old forms of discrimination that handicapped minorities — employment, housing, education, public health and denial of the right to vote — became legal for those convicted of a felony. Mass incarceration creates a permanent underclass.

Nicholas Kristoff reports that the median Black household in America still has only 8% of the wealth of the median white household. The United States Sentencing Commission found that Black men received sentences about 20% longer than white men for similar crimes. Researchers found that white legislators, Democrats and Republicans alike, were less likely to respond to a constituent letter signed with a stereo-typically Black name.

// You told a room full of law enforcement officials that the protesters outside were fighting for a just cause. How did you feel seeing them outside and unable to speak for their cause inside that day? Do you believe they were being heard?

I’m sure that the protesters were being heard. Several of the attendees of the meeting expressed support for the protests, acknowledged the need for protests and expressed some endorsements for my comments. I am proud and inspired by the protests.

// You were one of the few officials to leave through the front doors and you were met with some emotional and pointed remarks by the protesters. What was going through your head while you were hearing those things from people you were just defending inside?

First I am not an official, just and interested person. I did not notice how others left the assembly. It never occurred to me to do anything else but leave by the front door. The protesters were animated and passionate — this is as it should have been. This movement needs to be full of fire. It was James Baldwin who suggested that if you are Black and even semi-conscious is to be enraged virtually all the time.

I was honored to have the opportunity to listen. I love them, it’s as simple as that.

// You spoke about missing an opportunity by not listening to protesters, what is that opportunity and how can police departments better listen?

Whenever there are protesters, I think it is imperative to listen to their concerns. No one has all the answers. Protesters can provide insight that others, particularly those in leadership positions, might find educational, useful and inspirational. Among the most important aspects of leadership is accessibility. In my view, it is as important as empathy, courage, pure intelligence and the ability to communicate.

With respect to problem policing, in democratic countries the police are accountable to the government. The politicians have the ultimate responsibility. At the same time, politicians can misuse the police. Unconstitutional policing therefore reveals either a complicit or incompetent political structure.

The caveat that I offer is that activists should not depend on politicians exclusively to solve problems. I posed this question to the panel — a question Randall Robinson originally asked:

“Are these the renaissance Blacks who can wrench us away from the mince steps rusted strategic template to which our noses have been welded?”

// What do you say to people who believe that Black Lives Matter protests are only accomplishing destruction as a result of fires and looting?

First, unequivocally, Black Lives Matter. The protesters that you referenced are fighting for a just cause. I support their cause.

Let me be unambiguous about this — too many times uneventful protests have been ignored. It was John F. Kennedy who said, “those who make peaceful revolution impossible, make violent revolution inevitable”. And it was Martin Luther King who challenged his critics by saying, “They failed to go beyond a superficial social analysis looking on to the effects rather than the cause.”

Langston Hughes also wrote about this very thing in his poem A Dream Deferred:

What happens to a dream deferred?
Does it dry up like a raisin in the sun?
Or fester like a sore and then run?
Does it stink like rotten meat?
Or crust and sugar over like a syrupy sweet?
Maybe it just sags like a heavy load, or does it explode?

// What kind of police reforms can help address the issues around mass incarceration?

Let’s explore the fundamental role of police in this society.

Andrew Hacker put it this way — at the end of slavery the nation found it expedient to maintain Blacks as a subordinate cast. But given their admission to citizenship, new controls had to be devised to keep them in place. One was to give the police a long leash devising ways to absolve them if they went too far with their powers.

Surely, policing has changed since the days of patty rollers and slave catchers, but I pose this question: Has the legacy of this history been eradicated, annihilated or institutionalized?

The report of the National Advisory Commission on Civil Disorders had a treasure trove of suggested police reforms. There was a significant push for police reform called ‘community policing’ in the early 1970’s.

Fundamental police reform still did not come. Why?

The policing culture rejected the ideas. Such rejection was supported by labor unions and not insisted upon by elected officials. Why?

Clearly the issue was not important enough to engage the previously mentioned forces in a difficult confrontation. But let’s keep this in mind: Police reforms are important but cannot alone solve the true underlying problem of inequality.

My challenge to police chiefs is to advocate for the transformational changes that we all know alter crime and break the cycle of criminality. These include employment status, poverty, substandard education, substance abuse, and even benign neglect in public health.

// What role should police unions play in a world of police reform?

Police unions have fairly been categorized as opposed to all progressive change to the law enforcement profession. There is one report that police unions even opposed having officers wearing name tags for the purpose of identification. Any reforms that increase officer accountability is opposed by unions.

While unions are an impediment to progressive change, the union itself did not give themselves the leverage it now has. Elected representatives did.

Politicians may well be attracted by money, potential votes and the desire to avoid incendiary rhetoric that casts them as soft on crime. Therefore, pro police union politicians are complicit and should be held accountable for enabling these oppositions to reform.

// Where do you see the Black Lives Matter movement going? What do you hope it accomplishes?

I hope the Black Lives Matter movement persists. It must.

The Montgomery Bus Boycott lasted for 381 days. It must be effectuated in the streets, the ballot box, the courtroom, the boardroom and the classroom. I am inspired that it is a “movement not a moment”.

The movement can create fundamental change. Although there are those that oppose Black Lives Matter, it is the sentiment that expresses the energy and the hope to make this society meet its aspirational goals.

I know that the Black community should select our own allies rather than to allow others to select them for us.

Malcolm X once said, “I for one will join in with anyone — no matter what color you are — so long as you want to change this miserable condition that exists on this earth.”