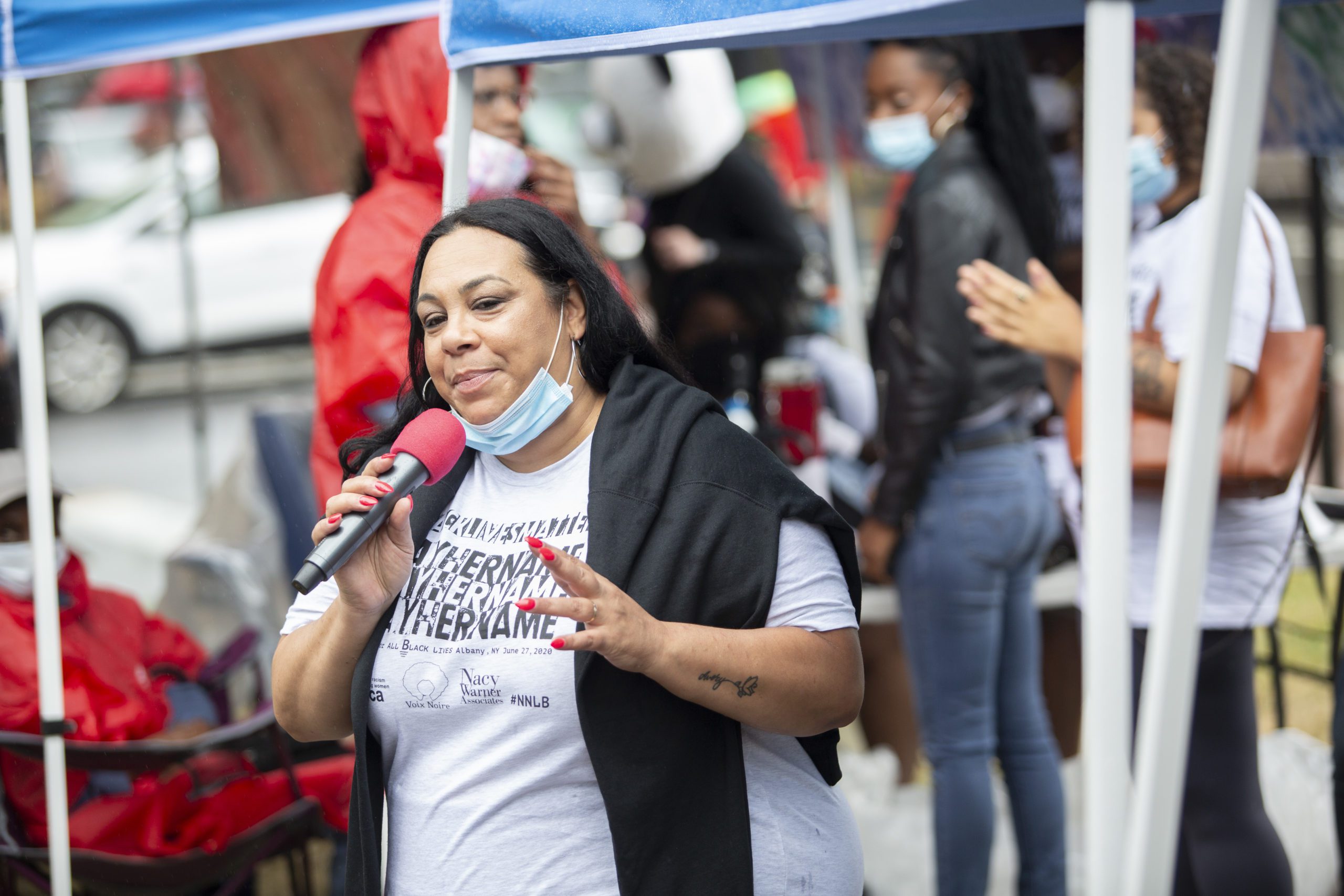 Jones, who was awarded the Henry Johnson Award for Distinguished Community Service by the city last year, said she opened up lines of communication on April 17th prior to protesters setting up camp in front of the station. In a statement released today, Jones said “Amidst these conversations, Mayor Sheehan assured Ms. Jones that the city had no plans of displacing the encampment stating, “They can stay there forever.”

As protesters set up camp between April 19 – 22, Jones said communication was happening daily — sometimes multiple times a day. Jones said her priority was “the safety of the young, Black, peaceful protestors, the city’s plans to guard the station in anticipation of the Derek Chauvin verdict, and potential impacts on Capital City Rescue Mission.”

On April 21 Chief Eric Hawkins notified Jones that they wished to place a four-foot barrier along the South Station sidewalk to allow access to the station, which city crews then put up without incident. The statement then outlines where communications began to break down:

“Three hours following the conversation of barricades, Chief Hawkins placed another phone call to Ms. Jones informing her that the DGS would be coming at noon on that day to remove the “graffiti” (sidewalk chalk) and posters from the Arch St. entrance of the South Station. The chief ensured that personal belongings such as flags and posters would be returned to the organizers. Ms. Jones advised the chief that that would escalate the situation directly following the barricade placement. Wednesday night brought snow, below-freezing temperatures and gusty winds.”

“My firm belief is that the Chief and the Mayor bent under the pernicious fear mongering of Albany Police Union President, Greg McGee — who alluded in his open letter that protestors had IEDs not unlike Sheehan’s reckless comparison to events of January 6 at US Capitol in which police officers were actually murdered,” Jones stated.

Jones told Albany Proper her last communication with Sheehan came on April 19 at 5 PM through text message. Jones said she was working toward a meeting between activists and the mayor and that Sheehan indicated she was considering such a meeting. She was also in contact with Perry Jones, executive director of the City Mission, to make sure deliveries were being made to their building.

Text messages between Jones and Hawkins reviewed by Albany Proper on Thursday following the raid reveal that Jones thanked Hawkins for keeping the lines of communication open and avoiding escalation. Sometime before Thursday Jones notified Hawkins that she was going to be unavailable due to a scheduled medical procedure and gave her contact information for All of Us organizer Jamaica Miles. The next text in the chain was Jones telling Hawkins “You lied to me.” No further messages from Hawkins appeared on the text thread.

“If there was something this police department could do in this environment of Black death they did the exact opposite,” Jones told Albany Proper. “It was something out of a 1960’s Alabama movie.”

As a line of riot police forcibly pushed protesters, community members, and press down Arch Street, heavy machinery was seen in the background loading belongings into dump trucks. Eight protesters had been arrested in the chaos, with one sent to the hospital.

“For the city to do this in the wake of so much state-sanctioned black death, it feels like the city is  almost lost,” Jones told Albany Proper, “We have violence and racism in what is supposed to be the shining Capital of the most progressive state in the country.”

Meanwhile, Paul Collins-Hackett, who sits on the city’s Community Police Review Board, was on site following a tip that the police would be removing the protesters. He assured them that a system of oversight and accountability was in place to safeguard against potential abuse — but they soon found that to be impossible after officers removed their name tags and duct-taped over their badge numbers before the raid.

“Why didn’t the Chief or Mayor even attempt to visit or speak with people who wanted to be heard so bad they slept in the cold for days? Why is no accountability being mentioned for the officer who struck the young woman in her face and caused her harm? Why is the public expected to repeatedly endure these harsh realities while they condone this dangerous behavior,” said Collins-Hackett.

A spokesperson for the police department said he had not seen the statement when asked for comment.

David Galin, Chief of Staff to Mayor Sheehan responded with his own statement and spoke for Sheehan and Hawkins to say that they “greatly appreciate Amy Jones’s attempts to help mediate between the City and the protesters.”

“Initially, the City sought to provide the protesters with space and time to exercise their First Amendment rights. Unfortunately, the group’s illegal encampment on Arch Street in front of South Station led to harassment of employees of the Capital City Mission, negative quality of life impacts on Albany residents living nearby, the defacing of public property, and public urination, defecation, and intoxication.

Protesters dispute these claims, saying that they utilized a nearby Porta-Potty and were even given access to neighboring apartments, used only chalk to write messages on the walls of the station, and welcomed and fed employees and guests of the City Mission.

“Protestors were openly hostile to all attempts by law enforcement to allow the protesters to assemble while ensuring the public’s health and safety, and the lack of willingness to cooperate is clear from Ms. Jones’s statement that simply cleaning the building was going to ‘escalate the situation.’”

Galin’s statement continued: “To be clear: as soon as Mayor Sheehan learned of reports of officers covering their badge numbers, she directed Chief Hawkins to begin an investigation and hold those who violated department policy accountable.”