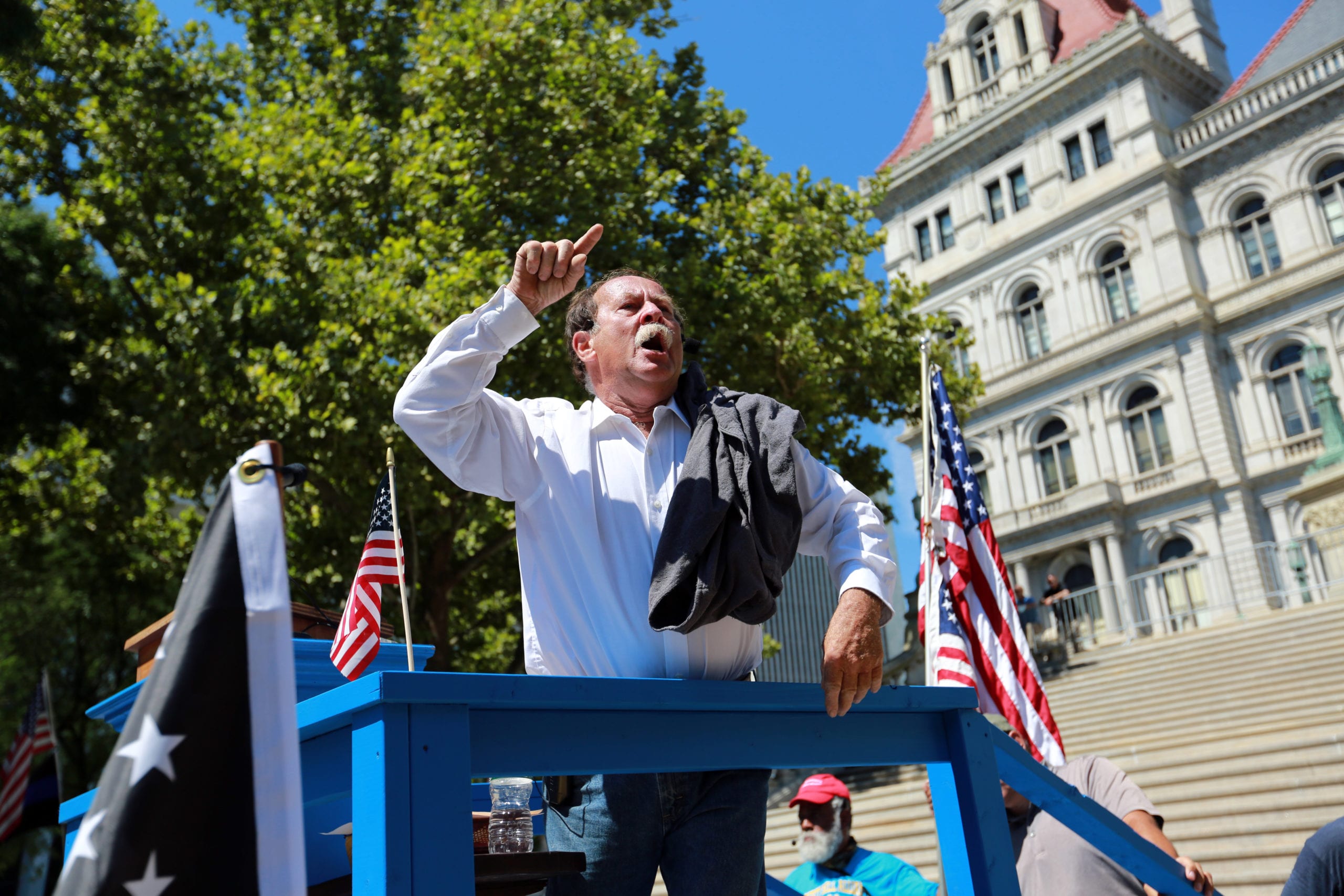 Conversations follow chaos at Albany ‘Back the Blue’ rally

As Albany Police Union President Greg McGee was finishing his remarks during a ‘Back the Blue’ rally at the Capitol, Black Lives Matter protesters appeared front and center.

They were led into the middle of the rally by Lukee Forbes, a local activist that has been outspoken against the “blue wall of silence” that he says the police union perpetuates. The timing appeared to be intentional.

Within seconds the small group was surrounded by dozens of rally attendees chanting “U.S.A.”.

It was shortly thereafter that chaos erupted.

For the hours prior, hundreds of people had gathered in front of the New York State Capitol to show their support for law enforcement in the wake of a nation-wide movement calling for police reform. It was a similar event to what had occurred in Saratoga earlier in the week, where Black Lives Matter counter protesters would end up getting shot with pepper bullets.

Before the two sides met in front of the Capitol, a small group of Black Lives Matter protesters remained across Washington Avenue behind a row of motorcycles. Their chants could often be heard over the scheduled speakers at the rally.

Sheriff Richard Mack, founder of the Constitutional Sheriffs and Peace Officers Association, defended the rights of the counter protesters.

“I will fight and die for your right to protest,” he said. “But I support the police that would arrest anyone who tries to tear down this statue.” Mack was referring to the statue of Civil War General Philip Henry Sheridan that has stood in front of the Capitol since 1916.

Mack received subdued applause when he spoke about the “failed war on drugs” and problems of mass incarceration. The crowd went wild when he spoke out against mask mandates during the pandemic.

Event organizers seemed to predict how the day would unfold. In rules distributed on Facebook prior to the event, they called on attendees not to “destroy or attempt to remove counter protest signs or property” and to “ignore all rude, vulgar obscene and profane comments directed at you.”

However, rally attendees took particular offense towards one of the Black Lives Matter protesters standing on and dragging a ‘Blue Lives Matter’ stylized American flag. The protester called it a desecration of the real American flag and that he believed it didn’t deserve the same respect. Various rally attendees attempted but failed to rip it from his hands throughout the altercation. Plenty of vulgar language was heard.

As the groups clashed and chaos was imminent, security personal and State Troopers attempted to get in between the crowd and deescalate the situation. During the melee, which included shoves, punches, and pepper spray, the scuffle moved towards the edge of the park where officers were able to separate the crowd.

It was there that Forbes asked the State Troopers if they were being removed from the park. Lieutenant John Digman informed him that it was public property and they were within their rights to be there. The troopers then escorted the Black Lives Matter protesters back into the rally.

By then, the chaos had subsided and the event was coming to a close.

Manetertep El Dey, a Black Lives Matter activist and organizer of Albany House of Peace, asked to speak. Event organizers brought him up to the stage where he delivered an impassioned speech aimed at finding common ground.

“It’s really important that we understand that in 2020 our job is to unite the human family,” he said. The crowd cheered.

He spoke about both sides believing in the laws set forth in the United States Constitution, but he called out those he said “rule by hatred and stereotypes.”

Following the end of the scheduled event, protesters and rally attendees lingered around and had peaceful but at times heated debates. Many shook hands and Tryon and Forbes agreed to meet at a later date to have more constructive dialogue.

No arrests or injuries were reported.