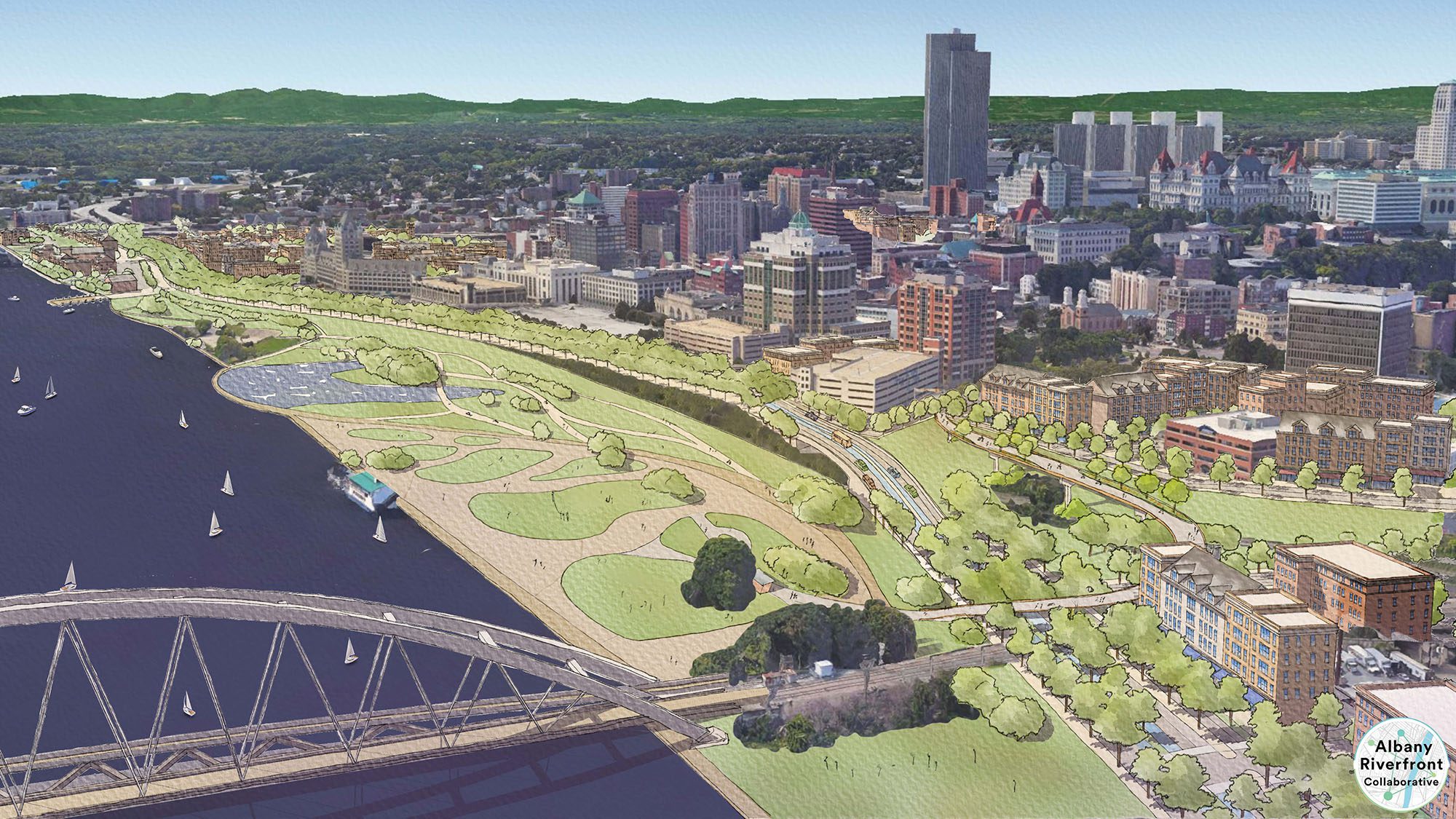 A grand vision to reconnect Albany with its waterfront

The watercolors offer a compelling glimpse of an attractive alternative present.

In these pictures, the monstrous elevated highway that dominates the Albany skyline, cutting the city off from its waterfront, is no more.

Instead, it’s been replaced by a pleasing expanse of green space and new housing.

Walkers and bikers navigate a network of paths along the Hudson River. A leafy tree canopy provides respite from the sun. Downtown is thriving, filled with pedestrians and cyclists and children at play.

Right now, this idyllic landscape is largely a fantasy – a vision of what Albany might be if Interstate 787 was removed from the picture.

The harms caused by I-787 are obvious to those who live in New York’s capital city.

It’s a massive concrete barrier that separates Albany from what should be one of its most vital and valuable resources – the river – and walls off some of its poorer neighborhoods from the city, exacerbating longstanding racial disparities.

While other cities, such as Schenectady, have seen new growth and development along their waterfronts, Albany has remained stuck in place, unable to capitalize upon the great potential of its riverfront to create a more vibrant and dynamic city.

At a time when communities throughout the U.S. are recognizing, somewhat belatedly, that people like being near the water, access to the city’s waterfront remains frustratingly limited due to the giant highway that many regard as one of Albany’s biggest planning mistakes.

What would it take to reconnect the people of Albany to the Hudson River?

Known as the Albany Riverfront Collaborative, the group formed last year with the goal of building support for what once seemed an impossible dream: tearing down the highway.

On Thursday the ARC will present the idea at the first of seven “community conversations,” an event titled “Connecting Communities and Unpacking the Legacy of I-787.” Sponsored by the South End-based non-profit organization AVillage, the discussion will be held at 6:30 p.m. at The Salvation Army on South Ferry Street.

“This is about trying to find out what Albany residents desire and what their hopes are,” said Scott Townsend, the Troy-based architect who founded the Albany Riverfront Collective.

Much of I-787 would be demolished and turned into a boulevard, with lower speed limits and stop lights.

The elevated South Mall Arterial would be brought down to surface level; drivers would go through the city to get to Empire State Plaza. The train tracks along the riverfront would remain, and the existing underpasses would be redeveloped for safe, convenient access to the green space along the river. 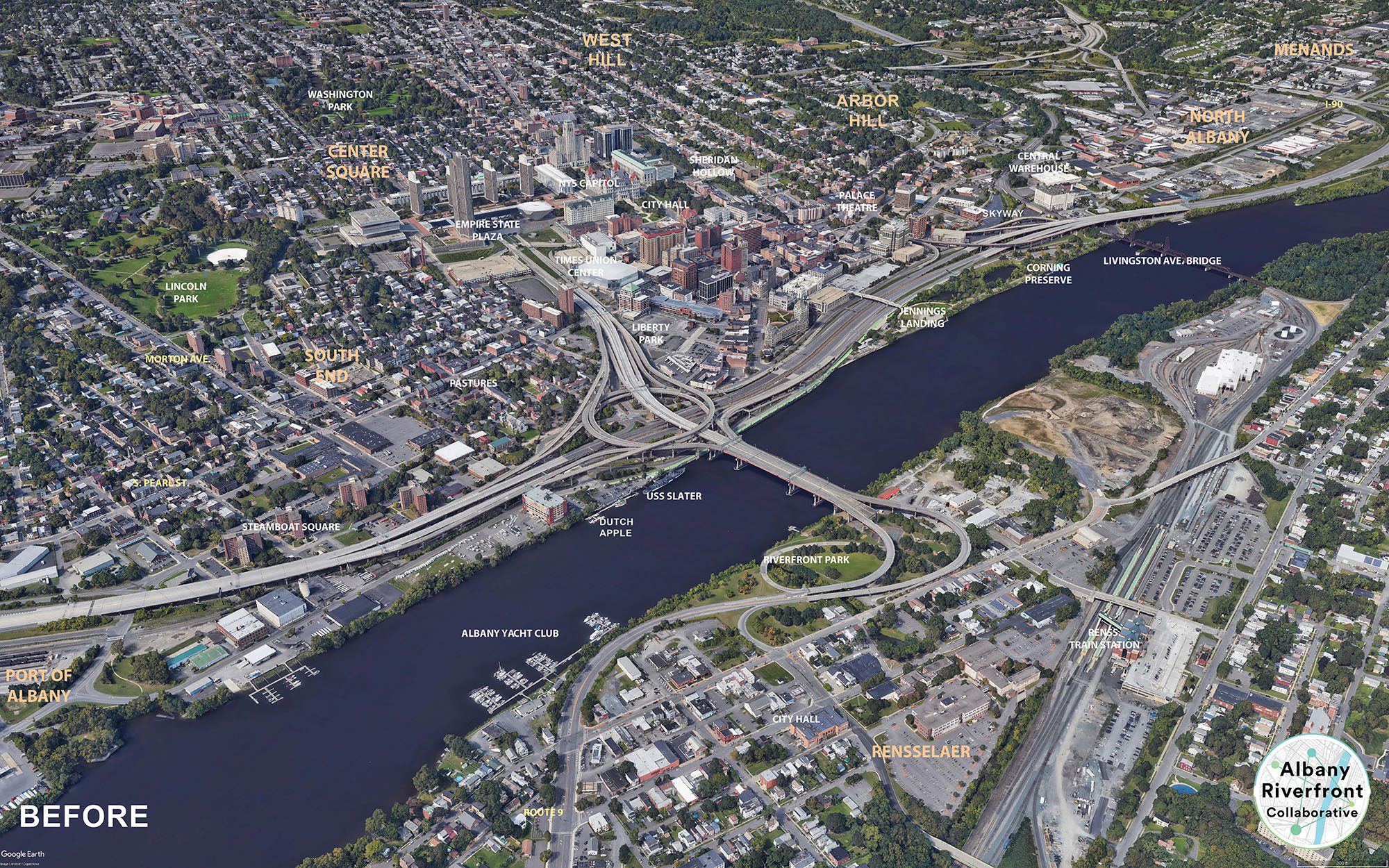 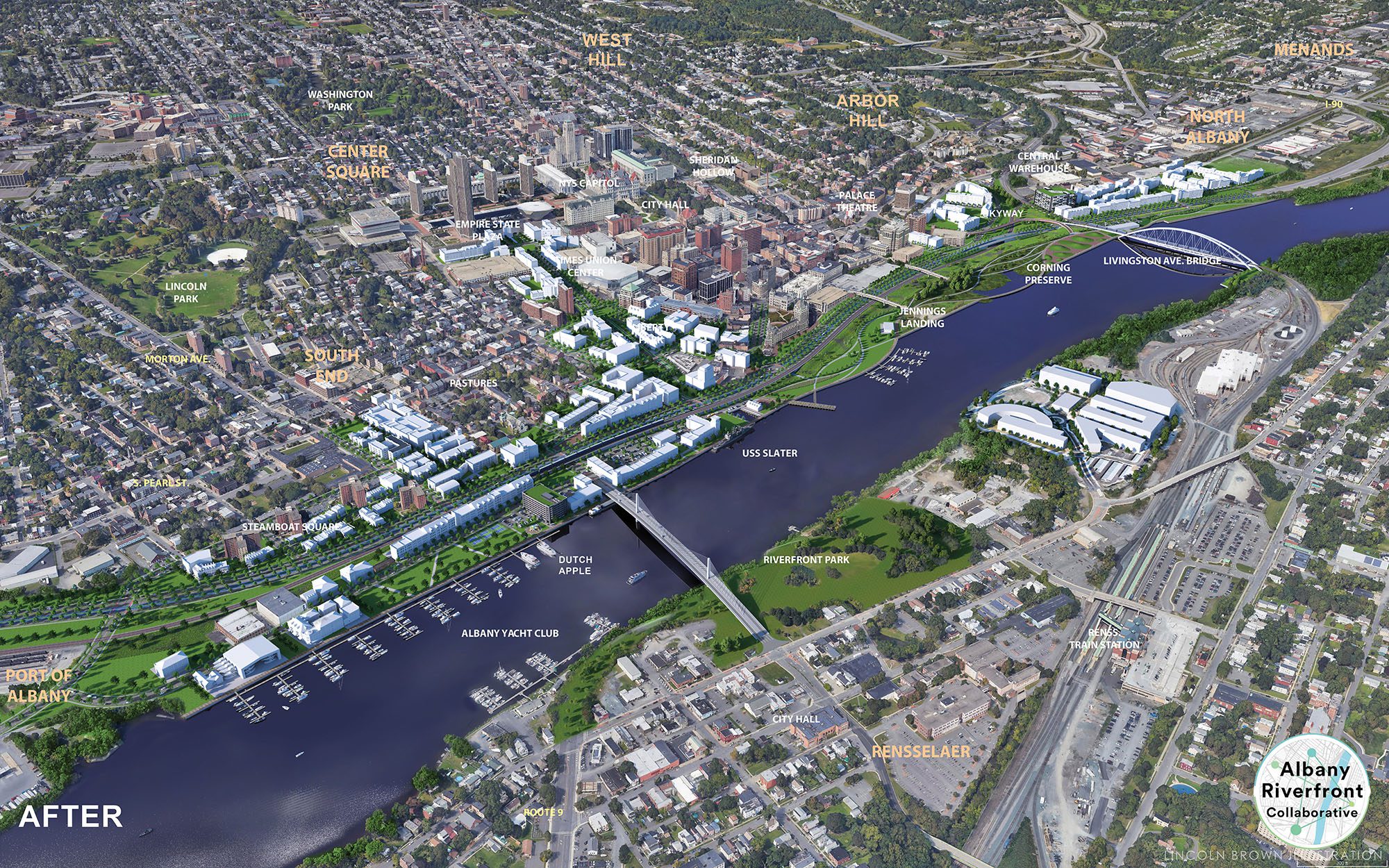 The benefits would be tremendous, according to ARC.

Removing I-787 would allow Albany to gain back 92 acres on the Hudson, freeing up 6.1 million square feet for residential and commercial development. An economic analysis places the project’s total fiscal benefit at $302 million over 20 years, a combination of new property and sales tax revenues.

The construction of I-787 prioritized the needs of state workers, making it quicker and easier for them to get to their jobs downtown and back home to the suburbs. But it came at the expense of city residents, with the South End, in particular, suffering the consequences.

The neighborhood – lower income, with a large Black population – is something of an island, separated from the rest of the city by the eyesore that looms large above it.

When my husband and I were looking for a house, we visited the Pastures Historic District several times, but were unable to set aside our misgivings about living in the shadow of the highway.

The land bank acquires vacant properties and sells them to people interested in rehabbing them and putting them back into use.

Many of these properties are in Arbor Hill and the South End, communities once denied access to FHA-backed mortgages and other financial services due to their large minority populations, a racist practice known as redlining. The Land Bank’s efforts, which seek to undo some of the harm caused by redlining, are hampered by the presence of I-787, which makes it more difficult to attract homebuyers and other investors, Zaranko said.

“(Removing I-787) is about taking space back,” he said.. “If we can bring some of that space back, we can do new development. … I-787 is holding back the true potential of not just Albany but the entire region.”

One promising initiative is the Albany Skyway, which is already underway.

This project entails turning the Clinton Avenue ramp off I-787 into a bike and pedestrian walkway that links downtown Albany with the nature preserve and bike trail on the Hudson River.

Advocates for tearing down I-787 see the Skyway as an important first step toward reconnecting Albany with its waterfront.

“But it is only a first step, and must be seen as part of a larger, comprehensive process to realizing the true potential of Albany as a riverfront city,” the group notes on its website.

In 2018 the Capital District Transportation Committee released a lengthy report on I-787 that explored a number of different options for remaking the highway, including converting I-787 south of Interstate 90 to something more like a boulevard.

“This would be a transformative project, which has the potential for significant positive impacts on the vitality of the City and downtown center,” the report notes. “This type of project is consistent with similar successful projects in cities around the U.S. where transportation infrastructure has been modified to mend the negative effects of the Interstate System highway building era and re-energize their cities and waterfronts.”

That said, it’s important to grapple with the fact that a lot of people use Interstate 787 to get in and out of the city.

Townsend and others contend that the highway is overbuilt and that pandemic-related trends, such as white-collar workers working from home in greater numbers, signal a permanent reduction in the number of people commuting to and from Albany on a daily basis.

Sandy Misiewicz, the CDTC’s executive director, said the organization plans to update its analysis of I-787 traffic patterns this year, an exercise that will assess the impact of COVID-19 and the shift toward working from home on the highway..

“It’s a reality that people do drive,” she said. “There’s a basic transportation component that you have to consider (with any plan for I-787). Sometimes there are unintended consequences. Where are folks going to travel? Are they going to go through Arbor Hill or the South End?”

Other cities in upstate New York – Buffalo, Rochester and Syracuse – are in the process of removing parts of their highways, and Townsend doesn’t want Albany to miss out on what he views as a once-in-a-lifetime opportunity to radically change the city’s road system for the better.

And there is opportunity.

“If we don’t go after that money and use it for Albany, it’s going to go somewhere else,” Townsend said. “Albany is the state capital. It should be a beacon for the region and the state.”