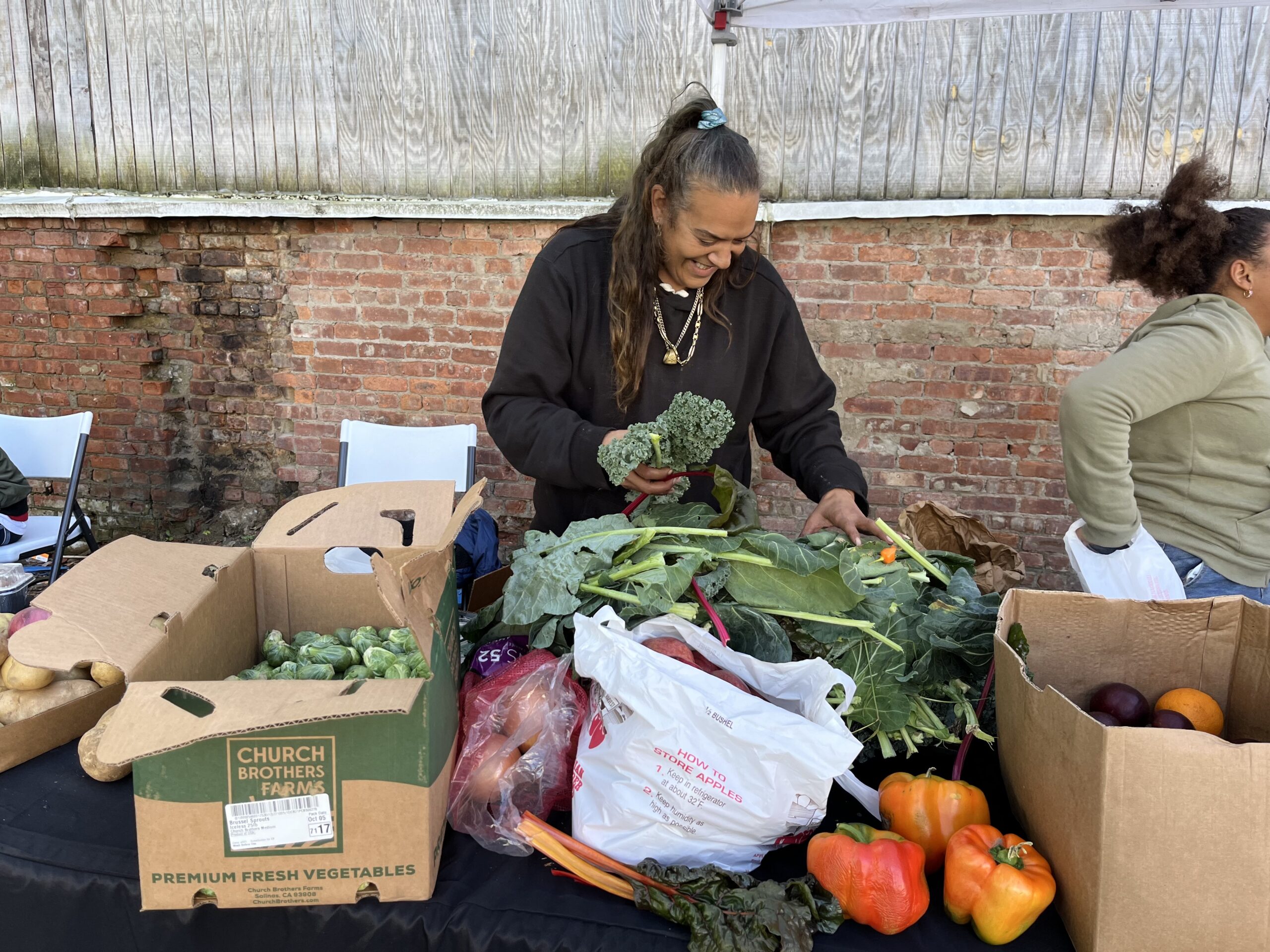 West Hill is a food desert. This market works to change that.

The people who frequent the West Hill Farmers Market live in the neighborhood, usually just a block or two away.

Many of them discovered the small-but-busy market while walking down the street, headed elsewhere. Perhaps they passed by a few times before opting to stop, curious about what it had to offer.

“They’d been here for some time before I decided to come in,” said Tinesha Hooks, a West Hill resident who gets fresh produce from the market. “I get a lot of fruit here. It’s expensive at stores.”

Tucked between Clinton Avenue and First Street, the farmers market occupies a once-vacant lot on Quail Street. It’s a welcoming and relaxed enterprise, where friendly staff greet the many regulars who arrive each Saturday afternoon looking for healthy, nutritious food.

The West Hill Farmers Market, now in its second year, is part of an ambitious effort to make one of Albany’s poorer areas into a greener and more entrepreneurial place, where residents grow their own food, eat fruits and vegetables harvested in the neighborhood and sell fresh produce from their own garden plots.

A path behind the market leads to Albany Victory Gardens, a community garden founded in 2018 by another Albany non-profit, the Eden’s Rose Foundation.

Here, visitors will find flourishing beds of vegetables, beehives and a tent where produce is distributed at no cost to people in need during the week. There’s also a blueberry orchard that’s tended to by local youth; during the summer, the fruit is available to residents for free.

West Hill has become known for shootings and other crime, but the market, garden and orchard present an alternative vision for a struggling Albany neighborhood with a tough reputation. Here, people will find a peaceful green oasis injecting new life into disused and neglected pieces of property.

“(The market) is brave to be in this area, because there’s so much happening here,” Hooks, 45, said. “For the community to come together, it’s a blessing. It’s hard to build a community.”

While it mainly serves West Hill, the vision for the farmers market is much grander.

“My hope is that within the next five years, people (from outside the community) feel comfortable coming to the market,” said Alexander, who serves as executive director of Grateful Villages, the Albany non-profit that oversees West Hill Farmers Market. “If we have entrepreneurs and vendors here, we want them to make as much money as possible.”

Nina Halsted, executive administrator for the Eden’s Rose Foundation, said her organization and Grateful Villages want to “create something sustainable. We think urban farming is one of the best practices to build in any community. It helps with food insecurity. It builds community.”

West Hill resident Michelle Stevens grows her own food at Albany Victory Gardens and staffs the produce table at the farmers market on Saturday afternoons, guiding guests through the process of picking out their own fruits and vegetables from a table filled with kale, apples, potatoes, cucumbers, corn and more.

She also brings along special treats – on one recent Saturday, she gave out hot bowls of chili cooked by her mom and home-baked pumpkin and banana bread. “That chili’s got all types of hot peppers in it,” Stevens said, noting that she grew the peppers in her plot at Albany Victory Gardens.

“My wife will love that,” one man said.

Stevens selected one of her larger containers.

“I’ll give you a big one,” she said, filling the container with chili and handing it to the man.

Stevens said the Farmers Market’s customers notice a big difference in taste between the fresh food they receive on Saturdays and the pre-packaged fare they’re more accustomed to eating.

“Some people didn’t know how fresh food tastes until they came to this market,” said Stevens, who took up gardening eight years ago. “It definitely brings people from different zip codes to this block.”

“We’re introducing a lot of healthy, organic produce into the community,” Alexander said.

He noted that roughly 40% percent of the produce at the West Hill Farmers Market is sourced from the community garden. The rest comes from the Capital District Regional Market in Menands.

“West Hill is in a food desert,” Halsted said. “A lot of the food that’s accessible is from bodegas or food pantries. People come up to us and tell us they’re so grateful to be eating healthy food. We’ve seen a huge impact.”

Eden’s Rose started Albany Victory Gardens in an abandoned parking lot in 2018. The non-profit also runs a three-year program in urban agriculture; graduates receive U.S. Department of Agriculture certification and are given a small plot of land on which to farm. One person has completed the program; Halsted said two others are expected to finish soon.

“Our goal is to help them to sell their goods,” Halsted said, of the urban farmers. “They could sell at the West Hill Farmers Market.”

Every person who comes to the market gets two $10 “veggie vouchers” that they can use to get free produce. Double Up Food Bucks, which match all SNAP-eligible purchases dollar for dollar, are also accepted.

The West Hill Farmers Market has grown significantly in a short period.

When I stopped by early in the season, it served about 30 families a week. By season’s end – the market will shut down at the end of October – it was serving between 60 to 80 families.

In my conversations with people at the market, I detected a real hunger for good, healthy food – and a deep appreciation for what Grateful Villages and the Eden’s Rose Foundation have built in the neighborhood.

“The market makes it easier for me when my grandkids are over,” said Denys Lesane, 52. “There’s lots of fresh fruits and vegetables.”

She added, “We don’t get too much of this in the city.”

The West Hill Farmers Market is open from 12 p.m. to 3 p.m. on Saturdays, or whenever supplies run out. It will close for the season at the end of October.