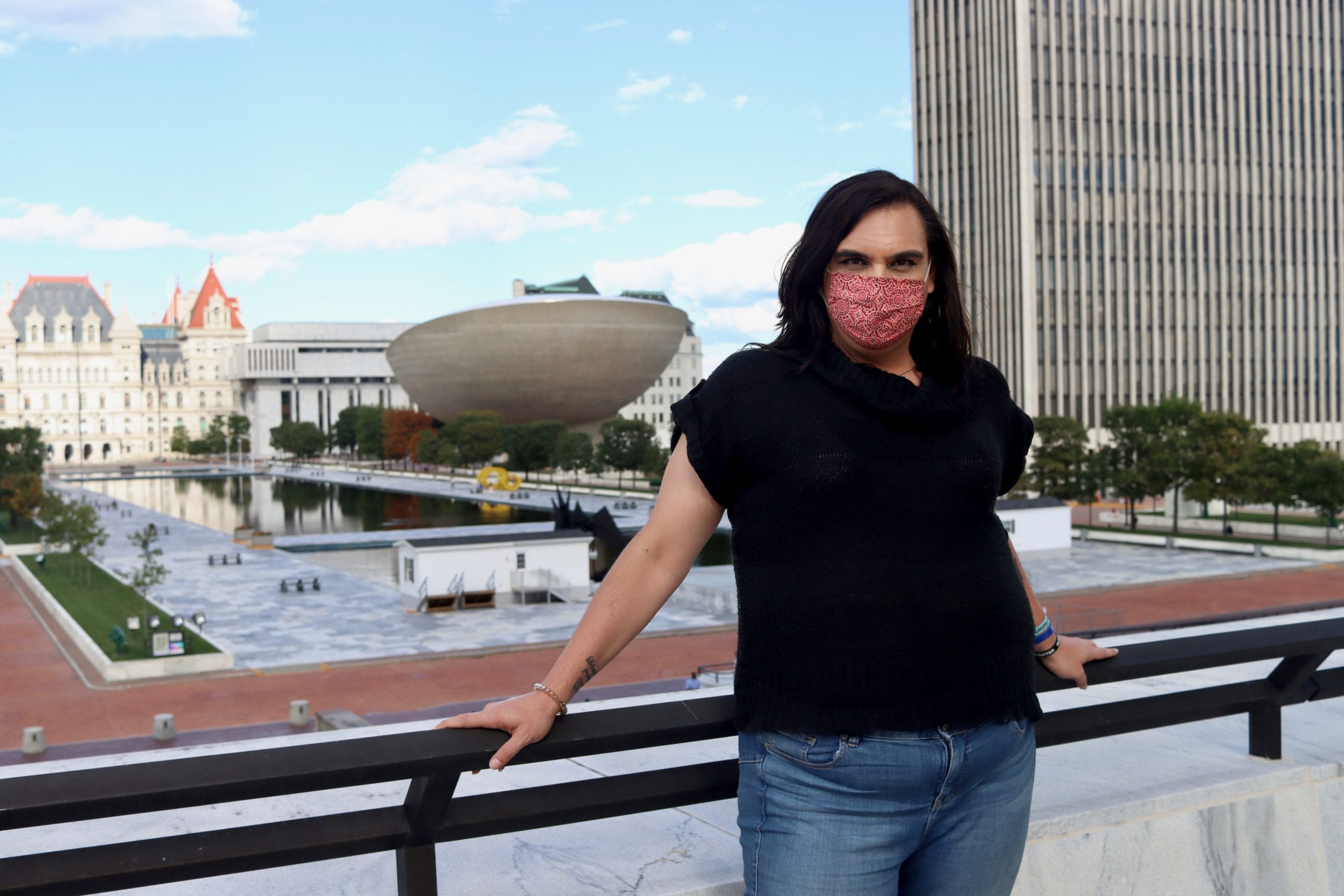 Brielle Mastroianni on dismantling the systems within ourselves

Brielle Mastroianni is heavily involved in activism work in the Capital Region and holds a leadership role with Community Matters.
She spoke with Albany Proper’s Shannon Straney about her experiences navigating homelessness and Albany’s shelter system as a woman of trans experience.

// Tell me about yourself.

I’m from Jersey. I moved up to Albany Valentine’s Day of 2017. I was in a domestic violence shelter in New Jersey. They pretty much asked, “How tied are you to the state of New Jersey?”

I was doing research and New York has some pretty good benefits and laws when it comes to domestic violence and LGBT rights. One day we called and Equinox said they had one bed available for a trans person, but they could only hold it for 24 hours. It was kind of a moment of do or die.

Honestly that day was such a whirlwind. I remember waking up the next morning and being like what did I do? Why am I here? I didn’t know anybody up here. I knew Albany was the capital of New York, but that was about it. I was one of those people that when you think of the state of New York you only think of the city.

I met with my case manager the next day. I laid it all on the table. I told her, this is my thing: I am a woman of trans experience and I am a person of color. I am Arab. I am Muslim. I live with mental illness – depression, anxiety and PTSD, all of which are on super crazy high levels because of my situation.

All the time. So I was pretty open about that from the jump.

I encountered some racism, Islamophobia and transphobia by both the staff and the other residents of Equinox.

They said most people find housing within 75 days. I ended up being at that shelter for almost 5 months. I had to leave my home behind. I had a backpack worth of clothes – that was it. I just wanted a life. I can’t really try to heal from my situation if I’m constantly in my situation.

Shortly after Pride weekend, I woke up and I was just like I’m so tired of this. I’ve been really agreeable. I’ve been really nice. I was so digestible to where internally I was screaming and clawing at myself. And I kept getting screwed over left and right. So I was like, alright, clearly being nice is not serving me any justice here. I’m gonna let ya’ll know how I feel.

I ended up letting everybody who worked at Equinox know exactly how I felt. I told people about themselves, colorfully. Lasted about 2 days.

One morning I was sitting outside. Equinox has an intercom outside. We had to buzz ourselves in, but they can also listen. Somebody said, “You’re having a rough couple of days.”

They knock on my door and say we need to talk to you. I was then told to pack up my belongings and leave. And I was like for what? I was told – and this is a choice of words, mind you – that I had been “terrorizing” the staff.

I will tell you, being associated with “terrorizing” people when you’re Arab and Muslim – that’s racism. To use that word specifically…

They said they were going to drop me off at some motel in Colonie. My first question was, “Where is Colonie?”

I remember feeling this is the moment that I get lost. They’re sending me to a town or a city that I don’t know. I don’t know where it is. My case manager gave me the alternative. She said you either take this apartment through Albany Housing at Lincoln Square, or we’re not helping you. I did have a choice, but I didn’t have a choice. So I signed the lease.

I was promised furniture. I was given a rocking chair, a bookshelf, a bed that broke within a day, some plates and cups and things like that. One picture to hang up on my wall – a picture of white Jesus.

My mental health was taking numerous hits – depression, suicidal ideation, numerous suicide attempts. I was in and out of psych hospitals. I did lose my housing again and I was placed at Mercy House.

At Mercy House they put me in a room with 6 cis-gendered women. You don’t think I hear talking? While I’m unpacking my belongings I’m hearing them saying, “That’s a man.” Just coming out of the psych hospital from a suicide attempt… Nobody knew, but that’s what I’m experiencing.

Every year the state of New York, for whatever reason, runs out of hormones for trans people. This was 2 years ago. There was a shortage at that point so people literally just could not get their hormones. I learned that a lot of people save up hormones. I didn’t do that. I was on the injectable. But my friend was like, “I have the pills.”

At Mercy House you are not able to hold your own medication. A staff member has to watch you take your pills and then you have to give all the pills back.

Again, I just came from a suicide attempt. I’m dealing with transphobia left and right from the staff and the other residents. I kept the pills in my bag, knowing the rules, but also fearing starting to detransition against my will in a woman’s shelter.

I want to explain to you how dangerous not taking your hormones is. Your mood switches because the hormones change literally everything about you, not just the outside but the inside as well. That’s dangerous. It affects you from your brain to the outside of your body.

I don’t know why or how… I guess they went into my room and found the hormone pills. I came home and they said, “You’re going to have to leave.”

I was like, this is medication that I need. This is what’s keeping me alive, mentally. And you’re treating me like a criminal and forcing me out.

I got accepted into RSS (Rehabilitation Support Services), which is a program that works with people with mental health. I’m staying with a friend because I can’t do the shelters. It’s too traumatic. There’s only a certain amount of shelters in the city of Albany that have spaces for trans people. But if there’s no beds, where do you go? DSS (Department of Social Services) has tried to send me to the city mission for men (Capital City Rescue Mission) – that’s where they were going to send me, a trans woman.

My therapist and the clinical director of the RSS clinic to the rescue. They really advocated for me. In certain moments it is super hard to advocate for yourself. They got me into housing through the RSS HOP (Housing Options Plus) program. It’s for people with mental health and acute medical illnesses. I’ve been treated so much better there. I was able to move in, had my surgery in January, then COVID-19 happened.

Thankfully I’ve been able to heal from a lot. I’m very grateful for the solitude that I had to endure in the beginning parts of COVID-19. I was very lucky during all of that to have a safe space. I couldn’t imagine having to face homelessness in the midst of all this. I don’t think I’d survive that, to be perfectly honest with you.

// So now is your housing situation stable?

Yes. I’m very thankful for that.

I am very blessed to have community around me. I am blessed to have a therapist and her boss who actually care and understand. I am very grateful for the help that I was able to get. It really allowed me to see there are still people who do care, that people out there with privilege can acknowledge that and see situations outside of their own life.

// And it doesn’t invalidate that other struggle.

People are so pigeonholed on one thing and I’m like these systems don’t benefit you either white dude. You’re some white dude who has to work 3 jobs to pay for something subpar. That’s still wrong. These systems are not built for you.

Looking back on my experience, the system is not really set up for anyone to succeed. Especially dealing with marginalized communities, there’s no equity within those systems. You cannot have equality without equity.

We can’t just talk about homelessness without addressing all of the issues and all of the barriers that may be causing homelessness. That’s what makes it so difficult. It’s all interconnected. There’s all of these things happening all at the same time, in the macro sense and the micro sense. We talk about dismantling systems of oppression. Because we’re forced to follow these systems of oppression, we have them built within ourselves as well. So it’s not just about dismantling the systems that are out there, but at the same time dismantling the systems that we have built within ourselves. It’s a lot. In order to change the macro we have to change the micro at the same time.

This conversation has been lightly edited for space and clarity.

Since this interview, Brielle’s cancer has recurred. Direct support for her upcoming medical treatments can be sent via Cash App where her username is $Brielle30