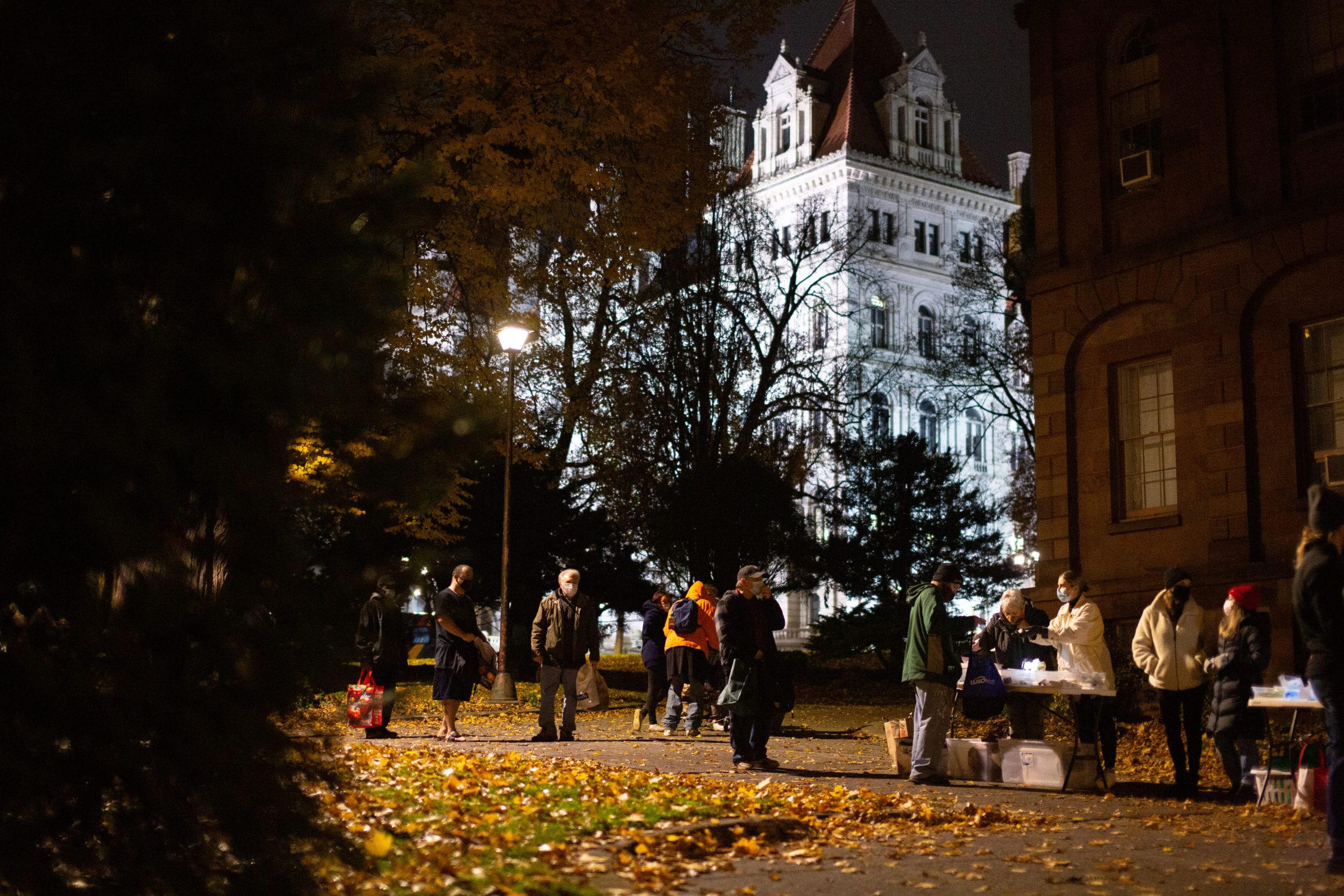 Grassroots charity group gives food, clothing, and friendship to those in need

In a dark park nestled between the Capitol Building and City Hall, where politicians debate how to spend billions of tax dollars, people bundled in coats and wearing backpacks huddle in a long line on a recent Friday night, patiently waiting for dozens of free meals.

Volunteers of all ages and backgrounds unfold 6-foot tables and place individually packaged foods, smiling and laughing with one another. The smell of freshly cooked hotdogs fills the air and an array of bananas, pastries, even dog treats, line the tables.

They are StreetSoldiers, an independent group of helpers who come together every Friday evening to feed people who are struggling and oftentimes homeless — using their own resources to provide food and clothing to others.

Renee Fahey, co-founder of StreetSoldiers, runs back-and-forth across the park paths, assisting each volunteer to prepare for 7 P.M. meal time. Easy to miss, but everywhere all at once, Fahey is not trained in disaster response, but rather an independent helper in the fight against food insecurity. Starting with a bag of granola bars, crackers, and blankets in her car, Fahey has always noticed the Capital Region’s hungry. “If you open your eyes and drive around, you see it, so you acknowledge it. There’s a need out there and not everybody’s comfortable going through an organization and going through the steps to get that food insecurity fulfilled,” Renee said.

Renee pauses to say hello and take a picture of Katie and her dog, Nikki. She knows everyone — from volunteers to the housing and food insecure people who drop in, by name. Most of them have been coming since StreetSoldiers began. She calls them all her “friends.”

Renee and her husband Mike started StreetSoldiers in 2016 with only one card table. They handed out free soup and sandwiches to anyone, no questions asked.

StreetSoldiers provides more than meals — they provide care throughout the week to the people who they’ve come to know.

“We build that trust and that foundation and we grow a really good friendship with them, so during the week if they need something, they reach out,” Fahey said. “If we can get it for them, we’re dropping it off. If I’m not, Nancy is. If Nancy’s not, Lisa is. So we have a really good solid core of StreetSoldiers.”

Fred Garavelli wears a wool cap and a patriotic mask as he stands behind a cooler.

“I usually bring hot dogs or something fairly simple,” he said. “The hot dogs are good because they can eat them standing up and they don’t need silverware.”

Every food item is individually packed at StreetSoldiers, not just because of COVID precautions, but because people can pack it up and take in their backpacks for the week. Garavelli started coming after he saw an article in the newspaper and has cooked weekly for them ever since. Garavelli frequently volunteers at a local soup kitchen as well and says things haven’t been the same since the pandemic began.

“The whole social aspect is gone,” he said. “You don’t know who your guests are now that they have masks on. It’s difficult to establish any kind of real contact.”

Madeline Connolly, another volunteer, explains that one of the most difficult struggles their friends go through is relationship poverty. “I absolutely love looking people in the eye, saying hello, and asking their name, slowly over time getting to know their story,” she said. “A lot of these people are alone, building relationships is empowering and impactful.”

Giving their friends a leg up

The Faheys and the other volunteers have helped a few people out of homelessness. One such person is Grey, who ran into the StreetSoldiers on New Years Eve in Washington Park, their former location. At the time, Grey was living in a tent by the river. “My life was so out of hand at one point where it was either a prison or a pine box,” he said. “It’s very humbling because my apartment just has – sometimes, it brings me to tears – things are in there and I don’t want to lose it for anything.”

Before spending his third winter outside, Grey finally found help when he broke his arm. “We went to the hospital with him. [They were] doing surgery,” Renee said.

One year, during a blizzard, Grey came with a shovel in hand and cleaned the area before the volunteers even arrived. “You guys come out during a state of emergency for us, that’s crazy,” he said. “The least I can do is show a little gratitude and help them set up. Just the compassion that goes in here. There’s no church behind this, there’s no organization behind this. It’s just people being human and that’s the biggest thing about it.”

Jazz also met StreetSoldiers at their former location in Washington Park. “For me, because I deal with homeless people, too, I saw them on the website and I said you know, my day was off, I went there and I said, you do you mind if I volunteer?” he said.

Homeless as well, Jazz recalls when Mike Fahey gave him a coat, boots, and jeans. Now he has his own apartment and volunteers with StreetSoldiers every week. “I never forget where I come from,” he said. “Renee, she takes my picture all the time. I have a good time down here with these people.”

StreetSoldiers had three previous locations in Albany, where Fahey says they were kicked out because of neighborhood association complaints and other reasons. They now finally share food and friendship in peace with a permit from the City of Albany for Academy Park.

Since then, StreetSoldiers has expanded to three cities in the Capital Region: Albany, Schenectady, and Troy.

Anyone can receive free food and/or volunteer with StreetSoldiers:
7PM on Fridays at Academy Park in Albany
6PM on Thursdays at 107 4th Street in Troy
4PM on Sunday at Zion Lutheran Church, 153 Nott Terrace in Schenectady