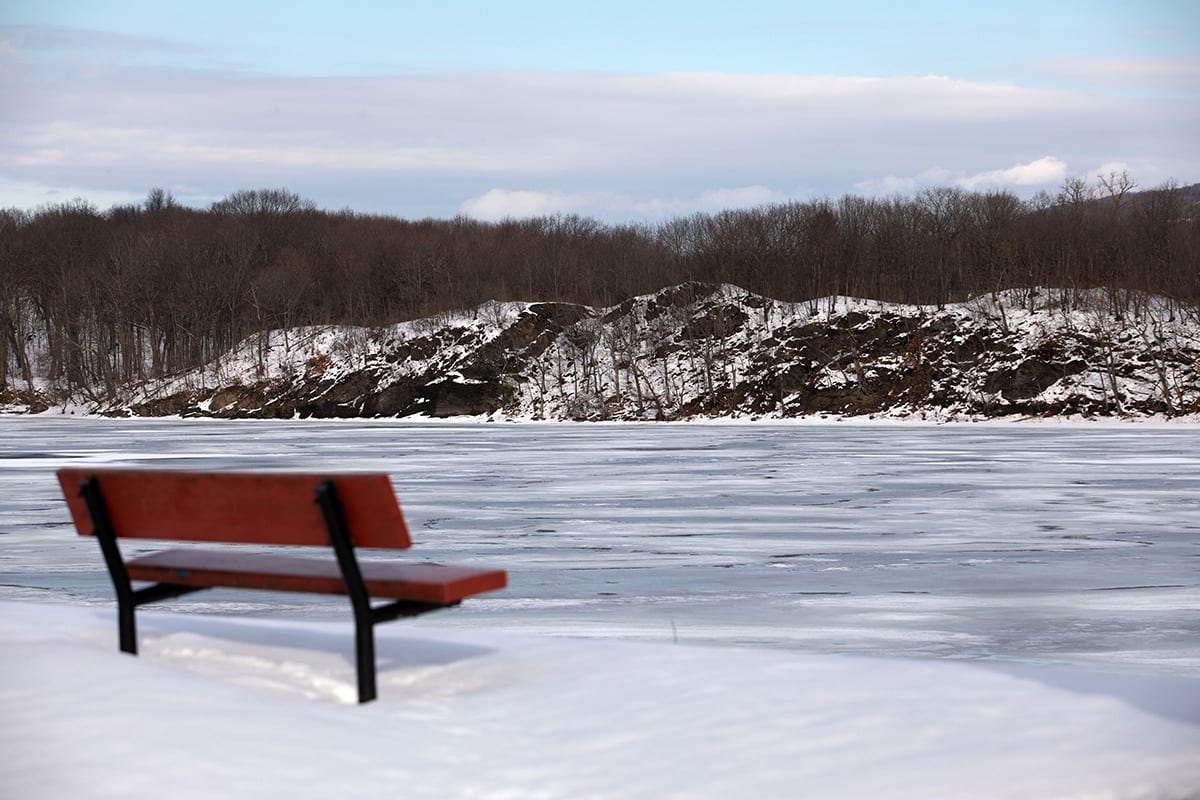 Troy neighbors fight to save historic Mohican site from development

Water flowing from the Hudson River laps at the shore of this wooded land in Lansingburgh.

Rare scrub oak trees creak as the wind flows through their branches. Birds chirp, beavers swim, and footsteps from deer and rabbits litter the snow.

This scene is familiar if you’ve ever visited nearby Peeble’s Island State Park — but the untouched land at 1011 2nd Avenue just outside downtown Troy is particularly special.

This land is properly named Mahicannituck, which means  “the waters that are never still.”

It is the last undeveloped forest waterfront in Troy and is eligible for the National Register of Historic Places with archaeological finds dating back to as early as 1500 BCE. The land is the former settlement of the Mohican Indians, traditionally named Muhheconneok, now officially known as the Stockbridge-Munsee Community Band of Mohican Indians today.

The entirety of the Capital Region was first settled by the Mohican people, who also settled parts of the Catskills all the way up to Lake Champlain, including much of the Berkshires. They are known as the only indigenous tribe to help the original colonists and are said to have developed laws we still follow as a nation today.

The Mohicans are closely allied and interconnected historically with the Munsee (Lanape) people, who extended South of the Catskills into what is now Northern New Jersey and Pennsylvania. The Mohican people were eventually removed from their eastern homelands in the Hudson and Housatonic River Valleys but still exist today as the Stockbridge-Munsee Community, a federally-recognized Tribal Nation headquartered in Wisconsin.

Today, their land outside Troy is only accessible by way of a small public road that runs up to it. Local residents frequently use the Mahicannituck site to fish and ride their bikes through the trails.

Developer Kevin Vandenburgh is asking the City of Troy to rezone this historic site so that he can build three four-story apartment buildings, a clubhouse, boat dock area, and an underground parking lot, all of which would decimate this land and its historical artifacts.

Indigenous people have been fighting to protect their land for centuries, including in 2016 during the highly publicized Dakota Access Pipeline protests at Standing Rock Indian Reservation. There’s also no shortage of history regarding the Mohican people’s local struggle — a fight to preserve the Columbia County area of Lebanon Springs, previously known as Montepoale, made it to the Supreme Court three times in order to keep to the oral promise to the Mohicans that the water remain free for all people forever. That promise continues today and is legally protected. Local residents have historically aided this fight to take care of the land, work that continues today in Troy through a grassroots organized activist group, “Friends of the Mahicantuck.”

Their petition to protect this historic land and stop the proposed development has 2,425 signatures as of today.

The ‘Friends’ are a band of concerned residents and organizations, including a non-profit called the Schaghticoke First Nations Inc. who are not associated with the Mohican people. Jessica Bennett leads the cohort and has been actively fighting against this development — launching a website, social media pages, attending important city planning meetings, and urging those concerned to sign a petition to protect this historic site.

In an online press conference, Bennett said, “We understand Troy’s need for economic development, but the city must prioritize its role as a steward of the site of unique importance to the Mohican people. [Rezoning the land] violates New York State’s Environmental Quality Review Act (SEQR).”

Bennett also expressed frustration that the residents of Schagticoke are being left out of the process. Although most of the land is in Lansingburgh, a portion of the land is also in Schagticoke. Bennett suggested that the city instead incentivize Vandenburgh to develop his apartment buildings at the recently closed Price Chopper land less than a mile away. This building is currently hosting the Troy Farmer’s Market for the winter.

Stockbridge-Munsee Community is opposed to the proposed development at 1011 2nd Avenue in Troy because it would be occurring on an ancient Mohican cultural site. The site is eligible for the National Register of Historic Places. It is in close proximity to other historic Mohican sites such as Moenemin’s Castle at Peebles Island, and Unawat’s Castle also in Lansingburgh. All of these sites together are important as part of our Mohican heritage in the region. Our Tribal Historic Preservation Officer has repeatedly sent our official comment letters to the City of Troy with our objections to the project. If the project were to move forward through the state SEQRA process, we as the federally-recognized Tribal Nation would continue to consult.

The Friends of Mahicantuck has led to much visibility of the issue and should be commended for raising awareness. We consult on hundreds of such development projects throughout our Hudson and Housatonic River Valley homelands each year, and rarely have local advocacy to support our  cultural resource concerns. However, the Friends of Mahicantuck was formed without our involvement and is working closely with a non-profit group that claims to represent indigenous peoples of the Hudson Valley, i.e. original Mohican and Munsee territory. Unfortunately, due to the alignment with this group, called Schaghticoke First Nations Inc., Friends of Mahicantuck has put us into a difficult position. We therefore have opted to operate separately and retain our Government-to-Government status in the project consultation. We do exchange information with the Friends group.

Meanwhile, Bennett said that the developer “doesn’t seem to have respect for the land.” She claims to have been told by him: “You want the arrowheads? Fine, I’ll give them to you.”

As of today, the Troy Planning Commission has recommended against rezoning the land at 1011 2nd Ave. Now, it is up to the City Council to make a decision.

To learn more about the Stockbridge-Munsee Community, the indigenous people who originally lived in the Capital Region, check out their website. https://www.mohican.com/