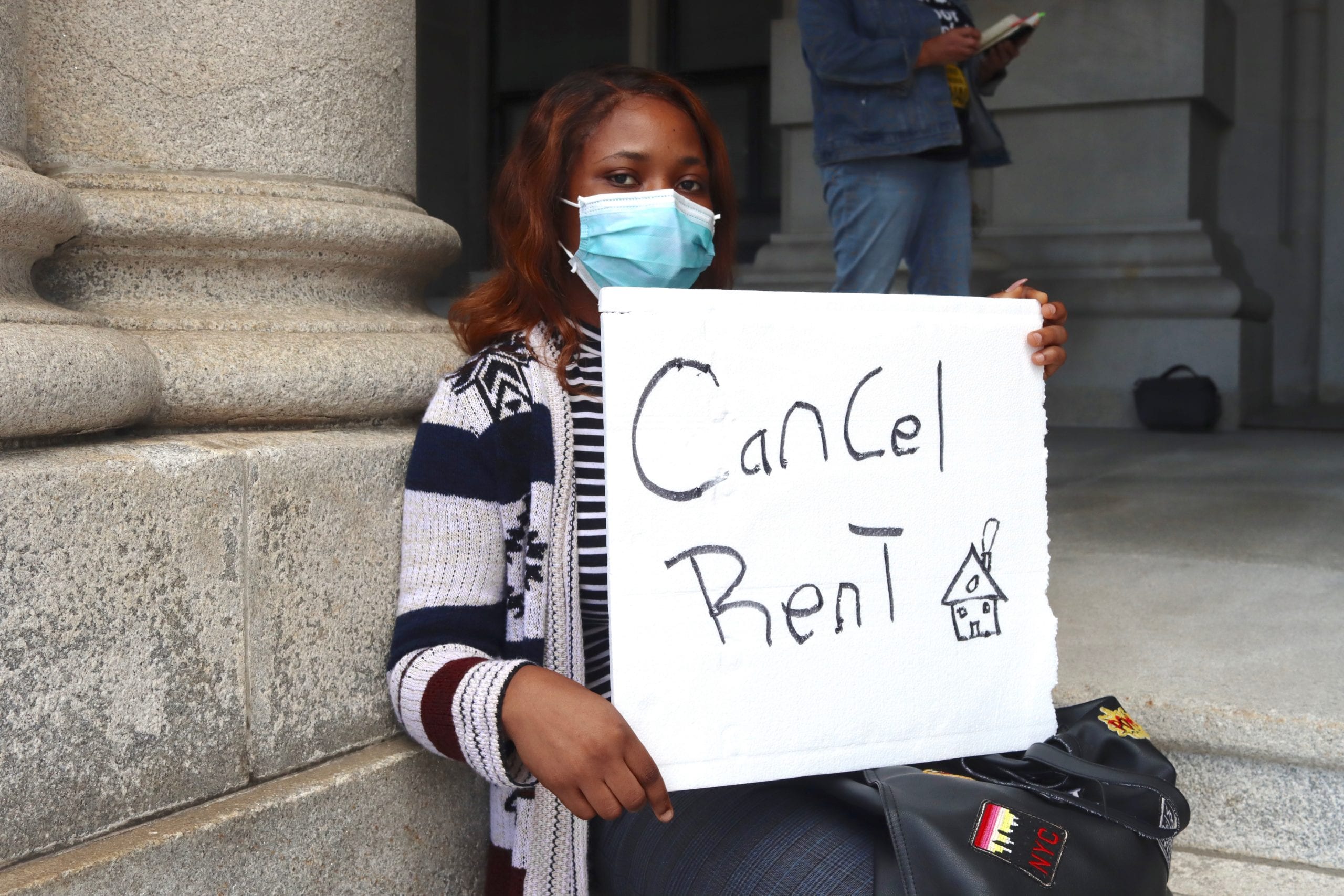 A group of tenants and housing rights advocates gathered outside the New York State Capitol last week for an ‘eviction resistance’ rally.

The rally was part of a statewide day of action calling for a comprehensive response to a housing crisis worsened by COVID-19.

Furniture and cardboard boxes blocked the Capitol building’s Washington Avenue entrances. They served as a backdrop for speakers to offer their grievances and potential solutions to a looming housing crisis.

“We’re looking at a huge, impending wave of evictions that is only going to worsen and increase over time,” said Luke Grandis, a statewide organizer for VOCAL-NY, a grassroots organization fighting to end homelessness, mass incarceration, the war on drugs and AIDS.

“We had a horrific homelessness crisis pre-COVID that has only been exacerbated.”

Eseka Nyamaa, who moved to Albany a year and a half ago, said she became interested in housing justice after working with Joseph’s House, a Troy-based non-profit providing services to those who are homeless in the Capital Region.

“I’m here to fight, to let the government know that people cannot live on the streets,” Nyamaa said. “Not everyone has the capability to afford rent. Some people still are out of jobs. What happens to those people?”

“I’m hoping that there should be justice, something that is fair, something that is very understandable. Not people wondering if they’re going to be on the street or not. People need to have peace of mind. There are other things that are going on right now.”

Just a few days before Thursday’s rally, Governor Cuomo signed an Executive Order to extend the Tenant Safe Harbor Act through the end of the year. Under the Safe Harbor Act, tenants facing eviction for nonpayment of rent are offered a path to prove financial hardship due to COVID-19 in court, allowing them to stay in their current residence.

While the executive order was presented as a measure to provide “fundamental stability” to struggling tenants in the midst of the pandemic, many housing rights advocates say it falls short.

“It doesn’t create a safe harbor for tenants. It’s very problematic. It just doesn’t get to the root of the problem at all,” said Laura Felts. Felts is the Executive Director of United Tenants of Albany, a non-profit focused on helping the city’s lowest income residents gain housing stability.

The Safe Harbor Act relies on the discretion of judges, who housing rights advocates say often side with landlords. Even if a tenant is able to prove financial hardship and avoid eviction, the act does not grant any financial relief to pay off the rent they owe or help with future payments.

“I think the hardest thing for us is to see these really thoughtful policy solutions on the table surrounding the cancellation of rent and mortgages with a relief fund and a really holistic eviction moratorium. To see those solutions just not move forward and for the Safe Harbor Act to be the thing that we’re trying to work with is just so difficult,” Felts said.

“I couldn’t imagine a more surface-level policy intervention to attempt to deal with the issues that we have.”

1 in 5 tenants in Albany

In Albany, where 60% of residents are renters, Felts said there are widespread issues surrounding tenants rights and housing instability. She said pre-pandemic, about 1 in 5 tenants in Albany were petitioned to court each year facing eviction.

Along with rent control and improved code enforcement, one of the policy changes United Tenants is pushing for is the right to ‘good cause evictions’. Good cause gives tenants protection from being evicted without a legitimate reason, such as nonpayment of rent or violating the terms of their lease.

“When we were first educating legislators about the need for good cause eviction protections, there were so many people saying, ‘Don’t tenants already have the right to have a reason before they could be displaced?’” said Felts. “And the answer is no. Definitely not.”

“They don’t really have any rights. Not having good cause eviction – that’s 60% of the people living in this city not having a basic right to live in their housing without fear of eviction for no reason, or for retaliatory reasons.”