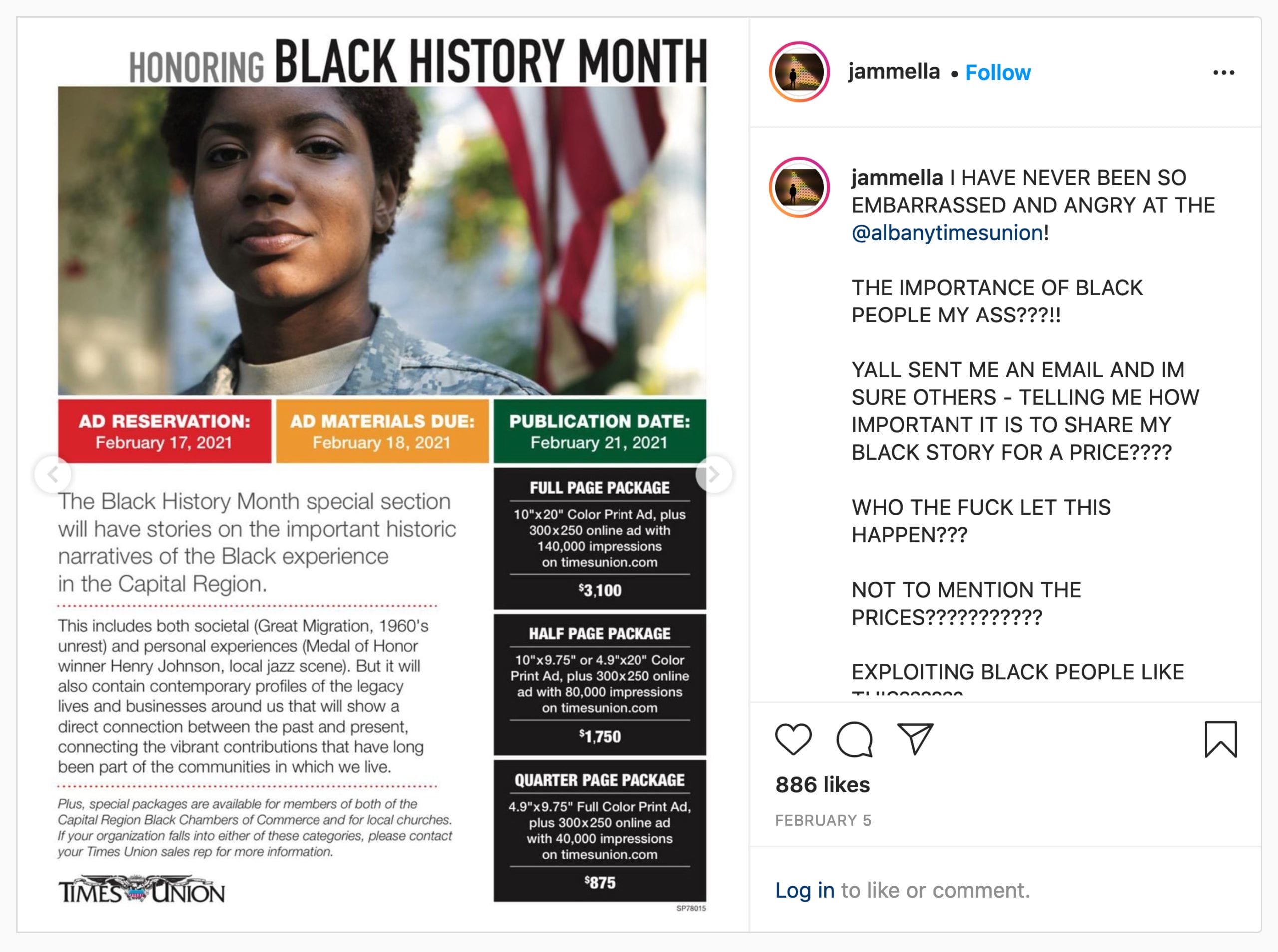 Jammella Anderson on the commercialization of Black History Month

Earlier this month Jammella Anderson was among those who received an email from the Times Union soliciting an ad package in the paper’s Black History Month section. She shared screenshots of the email on her Facebook and Instagram accounts, with captions expressing her disappointment with the paper’s actions. Within a week the online response to Anderson’s social media posts had prompted an open letter from George R. Hearst III, Times Union publisher and CEO, addressing the backlash. The section ran this past weekend with ads only from Price Chopper, Army National Guard, and two labor unions.

Anderson spoke to Albany Proper about her views on the commercialization of Black History Month through the Times Union’s actions.

// I figure the easiest thing to start is to have you give me the rundown of what happened.

So I got an email from the Times Union. Because it’s Black History Month, a lot of places have reached out to me, talking about the Free Food Fridges and just what I’ve been doing, especially being a Black woman. I assumed it was a part of that.

So I’m reading, reading, reading… It’s basically talking about amplifying Black voices and the same rigamarole that everybody gets. I go to the next page and it’s the breakdown of prices for advertising. They’re soliciting Black people and businesses to take out ads in that paper for Black History Month.

A bunch of people reached out to me and said that they also got solicited. I couldn’t believe that something like that could go through so many levels of people. Someone was like, “Yeah, that’s a good idea.” They weren’t even paying attention to who they were sending it to, you know? They just didn’t try. They just really missed the mark, especially right now.

// Why was the email you received wrong in your eyes?

Because of systemic oppression there is a difference in the way we’re treated. With something like the (Times Union), we need them to be able to step up and to amplify our voices in a way that showcases all of us, not a monolith. We need the paper to be providing a resource.

All the mutual aid efforts going on around Albany… It’s from people like me who are like wow, there is a direct need in these communities. We need to help. How can we leverage our resources? That’s straight up what’s going on. To tie that all back to the paper – to make us pay to put that out there is insane, especially when a lot of these organizations are grassroots organizations. They don’t have enough funding. They don’t have the proper resources.

So why would I use funds that could feed people, you know? Why would I give that money to a paper who is not going to paint me in the best light?

// On February 10, the Times Union posted an open letter responding to the negative feedback over the solicitation email. Who do you think that statement was for?

It was for themselves. That’s who that was for. They needed to respond. They understand how social media works.

// Would you call it an apology?

It’s like when you’re learning how to apologize as a kid. If a child had written that, they would be corrected. It was very I’m sorry that you feel this way. There was no accountability for their actions. Their action was very harmful. That was a very harmful thing – your voice is only important if you pay for it.

I guarantee I am a large part of why they did an apology, but I also know it’s because of the white people who wrote in. People were mad. People were freaking mad.

// Why is that important?

Having white people stand up so that we don’t have to do the emotional labor is really important. Me, I do that emotional labor because I want to, but it’s fucking exhausting. It’s important that when this stuff happens that white people are standing up. Not speaking for us, but speaking on our behalf and speaking in a way that is amplifying our feelings and our emotions.

// What do you think the Times Union could do better going forward?

We need to stop handing over the microphone to Black people to shut them up. Having a section for Black History Month… It’s almost like OK, we gave you the bone so you can quiet down for a little bit now. That’s what that is when they do that.

I got sought out to be on a committee at the Times Union. It was basically an antiracism committee. They wanted people who are leaders in the community to help with things like this. But we don’t really have a pull or a say, you know?

// Also that’s asking you to work for free. Maybe they should be investing in that?

We need people who look like us to be the ones writing, to be the ones interviewing. Hiring people and seeking people out and paying them. They were talking about giving money to grassroots and nonprofits. Who’s the deciding factor for where money goes?

// That’s something I wanted to ask about. In the open letter it says proceeds from the Times Union’s Black History Month section will be donated to “nonprofits that are active in the Black community.” So something like the Free Food Fridge, as a grassroots operation, wouldn’t be included there. Also it’s not saying local. There’s no promise that it’s going to go back into the Capital Region.

Also it’s not saying that it has to be a Black-owned place. That’s the other thing. They’re saying they’re working with the Black community.

// What do you think about that?

I think nonprofits are great. They’re really wonderful. Eventually I will become a nonprofit. I could have done it a lot sooner. I just… Why do I have to prove to anybody why my organization is worthy of your money? It’s changing the narrative around giving. You can just give money and not have a say in what happens with it, which is essentially why I did all of the fundraising I’ve done.

You can support Free Food Fridge Albany through monthly contributions on Patreon and Jammella directly on Venmo @Jammella-Anderson.