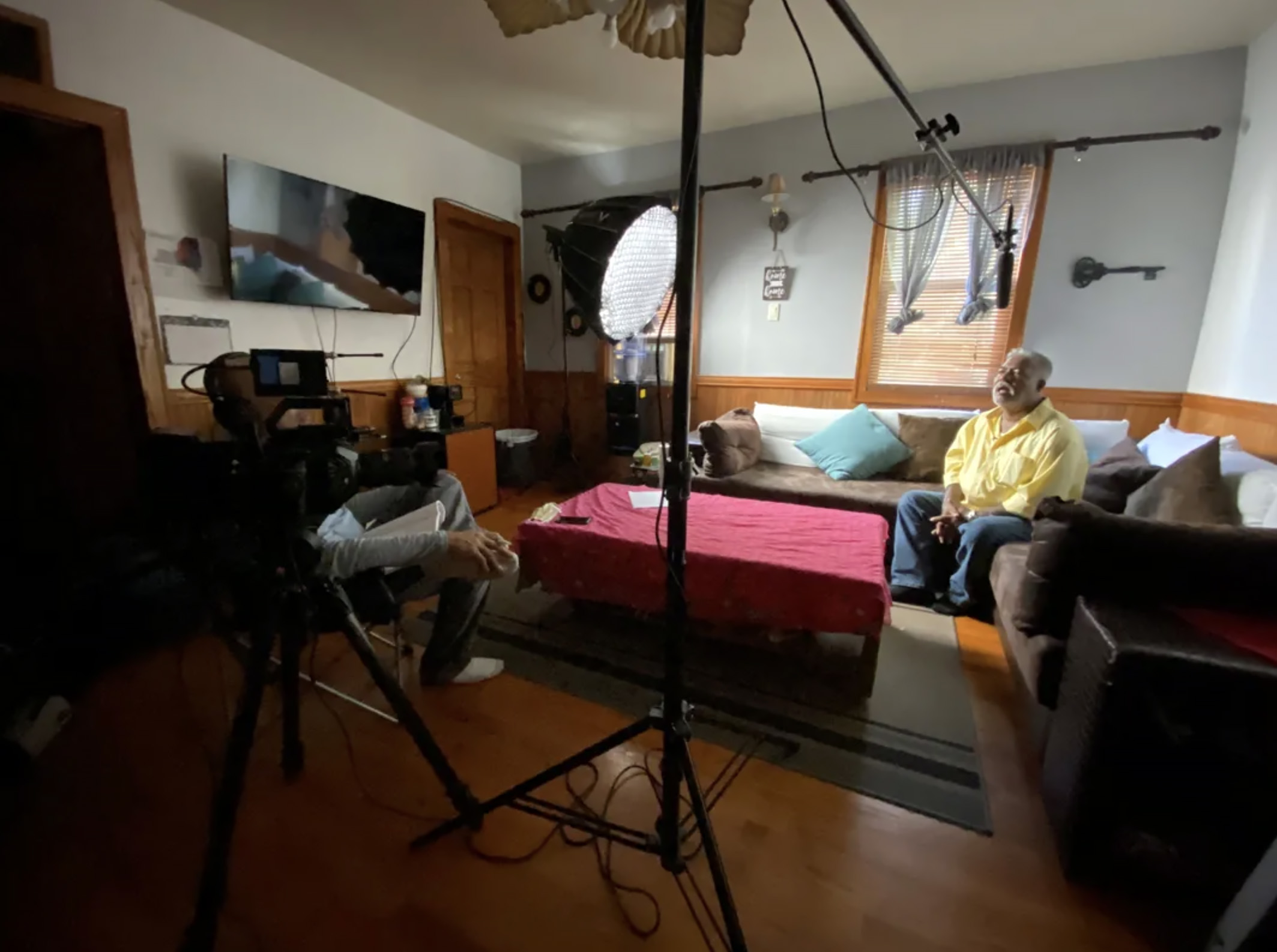 Nearly two decades have passed since Yassin Aref and Mohammed Hossain were arrested.

Years behind bars robbed them of the opportunity to see their children grow up. Now free, they have readjusted to life outside prison. They can reflect on what happened to them. But things are not, and will never be, the same.

The long, strange and often maddening saga of Aref and Hossain, Albany Muslims apprehended in an FBI sting operation in 2004, is now the subject of a compelling documentary,  titled “Witness.”

The film screened earlier this month at a well-attended, sometimes emotional screening at The Sanctuary for Independent Media in Troy. Hossain and his family were in the audience, as was Aref’s daughter.

Locally, the details of the story are well-known: Aref, an imam at a mosque on Central Avenue and Hossain, owner of a nearby pizzeria, were sentenced to 15 years in prison in 2007, convicted of money laundering and terrorism-related charges.

But the case against them was controversial almost from the start, with many observers – including this writer – coming to believe they were wrongfully prosecuted. Outraged Capital Region residents joined forces to support Aref and Hossain – a network of friends and helpers that exists to this day.

The story is laid out with damning clarity in “Witness,” which documents how the post-9/11 desire to prevent future terrorism attacks led to dubious cases such as the one against Aref, a Kurdish refugee, and Hossain, a Bangledeshi immigrant.

“The moment I knew this would be a film was when I sat down and began to read what was happening,” said “Witness” director Masood Haque, who moved to the U.S. from Pakistan when he was in eighth grade. “This could have happened to me. I could be Yassin. I could be Mohammed.”

The film’s villain is Shahed Hussain, the informant who befriended Aref and Hossain and helped put them away.

In 2003, Hussain – known, at the time, as “Malik” – offered Hossain a $50,000 loan as part of a money-laundering scheme tied to the sale of a shoulder-fired missile to be used in a terrorist attack. Aref, who spoke little English, was brought in to witness the transaction per Muslim custom.

The plot was complete fiction – no terrorist attack was ever planned, no weapons ever sold – and critics decried the case as a classic example of entrapment, noting that both men were leading quiet, law-abiding lives when Malik entered the scene and wreaked havoc. Neither had a criminal history.

Other complaints concerned the use of secret evidence against the men and the lack of explanation as to why they were targeted in the first place. A translation error also provided ample reason for skepticism: A notebook found in Iraq was said to refer to Aref as “commander” in Kurdish, but the word simply meant brother.

This perspective – that Aref and Hossain are innocent victims of government overreach – makes “Witness” a “politically toxic” film, Haque said.

“It takes two characters who were convicted by a jury and advocates for those characters,” he said, at the Q&A that followed the screening in Troy.

The story also has a disturbing coda: Hussain owned the limousine involved in the devastating crash that killed 20 people in the tiny community of Schoharie in 2018.

The vehicle’s brakes failed while descending a steep hill, and the National Transportation Safety Board later determined that the probable cause of the crash was the limousine company’s “egregious disregard for safety.” Hussain disappeared to Pakistan: His son, Nauman Hussain, pleaded guilty to 20 counts of criminally negligent homicide in connection with the crash.

For many, Hussain’s ties to the deadliest transportation accident in the U.S. in more than a decade confirmed their worst suspicions about the man who played such a pivotal part in the FBI’s pursuit of Aref and Hossain.

“The FBI bears responsibility for enabling this guy,” Kathy Manley, Aref’s attorney, told me in 2018, when I was writing for The Daily Gazette in Schenectady. “They knew what he was like. He’s a pathological liar.”

A decade-in-the-making, “Witness” is riveting and essential viewing, a taut mix of interviews, archival news footage and FBI audio and video recordings. It tells a tale that’s at once global and local, and does so with a rare, unforced intimacy, showing viewers the complicated individuals behind the headlines.

Haque filmed many of the interviews featured in “Witness” years ago, then set the unfinished film aside for five years and waited for Aref and Hossain to get out of prison so he could interview them.

“I could not tell the story without the voices of these two men,” he said.

Haque traveled to northern Iraq to film Aref, who was deported in 2019 after his release from prison, and spent time with Hossain at his home in Albany post-incarceration.

This footage is extremely compelling – reflective and philosophical, sometimes pained – and it’s complemented by interviews with Hossain and Aref’s now-grown children, who describe the toll of arrest and imprisonment on their families.

“For Yassin, it’s really a lifelong punishment,” Haque said, noting that Aref has children who have built lives in America. “He cannot come back (to the U.S.). They took away his children at the age that they did, and even now they can’t be a family together.”

“Witness” opens, appropriately enough, with a quote from Franz Kafka’s “The Trial,” and Haque cites director Orson Welles’ stylistically adventurous 1962 film adaptation of the famous novel, about a man, Josef K., who is arrested and tried but never told why, as a key influence.

“On September 11, 2001, many American Muslims could empathize with Josef K.’s plight,” Haque says in his director’s statement. “The ground beneath their feet had shifted. Extremists

hijacked not only airplanes but Islam, and as a result the American public became suspicious and hostile to Muslims. As antipathy against them mounted, surveillance and entrapment of Muslims became a standard law enforcement practice.”

Haque learned about the Aref/Hossain case while making his prize-winning short documentary, “Stranger in Paradise,” about a Pakistani man, Ansar Mahmood, arrested in 2001 for taking pictures of the landscape near Hudson, N.Y., – the view included a water treatment plant – and later deported.

“It just seemed like such a travesty, what had happened,” Haque said.

Haque, 58, is an atheist, but he was raised Muslim and believes he brings an important – and unique – point-of-view to the Aref/Hossain story.

“When non-Muslims have told this story, they have ignored the cultural context and they have stuck with the court arguments and civil liberties,” he said. “Whereas someone like me can come in and want to know: How do these people, a guy from a village in Bangladesh and a guy from a village in Kurdistan, how do they end up where they are right now?”

“When you are an immigrant, you understand other immigrants in a very intimate kind of way,” Haque continued. “It was very important for me to hear both of these men speak their own language. … How you express yourself is very important.”

One of the things that drew Haque to the Aref/Hossain story was Hussain, the informant.

Just months after the terrorist attacks of Sept. 11, 2001, Hussain was arrested for helping immigrants obtain Department of Motor Vehicles licenses by cheating on exams.

Facing deportation, he began working for the FBI. His personal life was a mess: In 2003 he filed for bankruptcy, reporting substantial debts. Later that year, a fire destroyed most of his Loudonville home, nearly killing his wife.

“I thought he was the most interesting character,” Haque said. “He’s a morally compromised guy who’s surviving in this society and he has to survive by betraying other people. … That’s a terrible choice.”

Haque, who lives about two hours south of Albany, in the village of Suffern, is an emergency medicine doctor who works two days a week in an urgent care clinic – a schedule that allows him to pursue filmmaking in his off-hours.

Medicine, Haque said, has been good preparation for documentary filmmaking.

“You learn to ask questions about the most private things,” he said.

It does not have a distributor, though Haque said it will likely become available online, perhaps through the streaming platform Vimeo On Demand, by the end of the year.

Capital Region moviegoers will have another chance to see “Witness” on the big screen: The film will screen at 7 p.m. on Sept. 14 at Proctors in Schenectady.