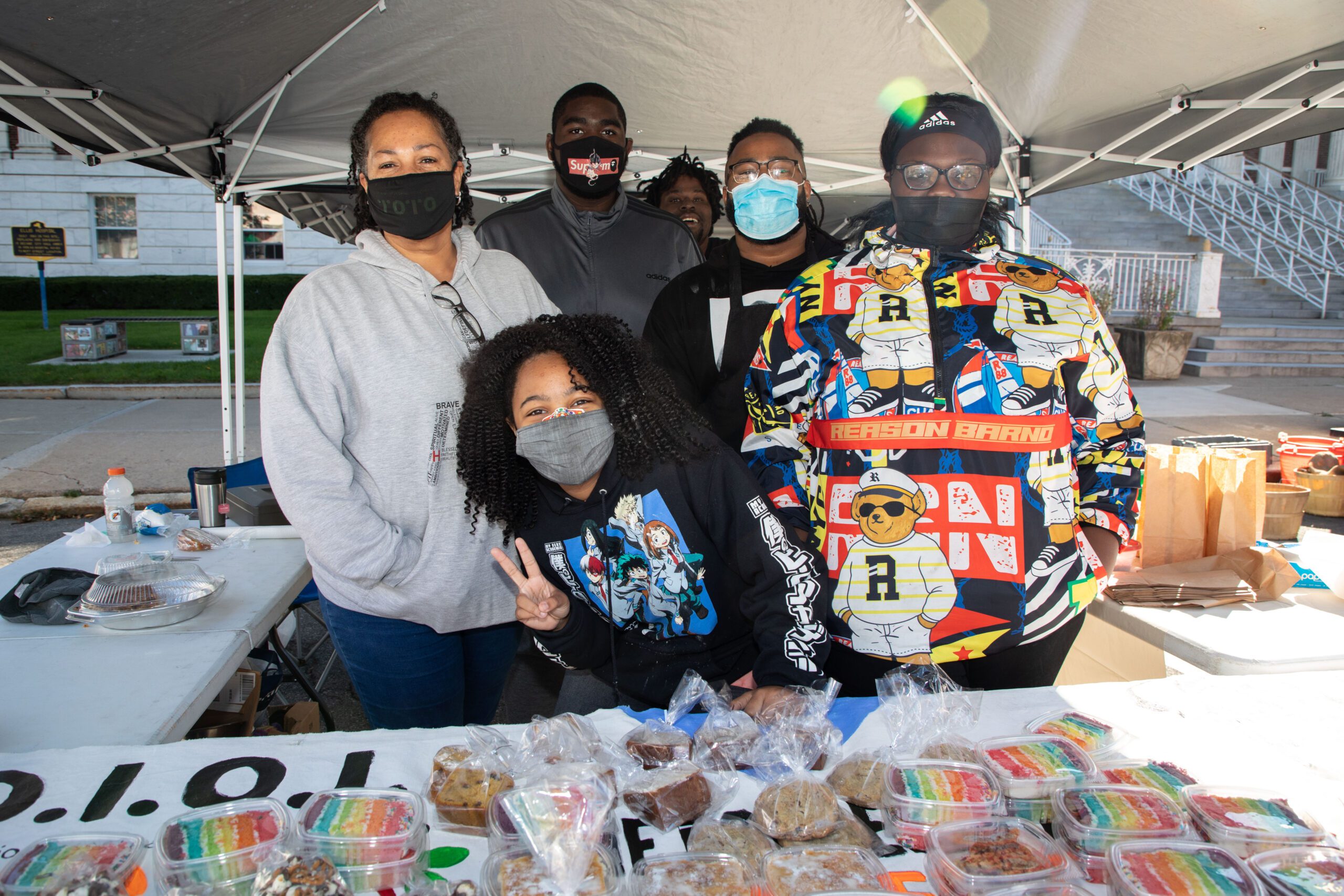 There’s a steady flow of customers at the Cornerstone Bakery tent, checking out the mouth-watering array of baked goods lined up in a tantalizing display.

“Those brownies you had last week were the bomb,” one customer raves, eyeing the goodies. “It was almost like eating a truffle!”

The youth who make the baked goods appreciate this feedback – the enthusiasm of Cornerstone Bakery’s regulars is one of the things they most enjoy about manning their tent, a fixture at the Schenectady Greenmarket since last spring.

During this short time, they have become comfortable interacting with the public, answering questions about everything from pricing to ingredients to what, exactly, Cornerstone Bakery is. In a sea of stalls staffed mainly by adults, their youthfulness stands out.

Cornerstone is more than a bakery.

It’s an education and pathway, an opportunity to gain real-world skills and a working knowledge of entrepreneurship.

“This is going to be my career,” a confident 12-year-old Ife McLaughlin tells me, while taking a break from baking. “I’m going to be a chef.”

I met Ife at Cornerstone’s Saturday class, where she and several other students made the baked goods sold the next day at the farmers’ market outside city hall.

They worked under the tutelage of baker/caterer Belinda Palombo, in a tidy, sunlit kitchen at Schenectady Works, the Union Street-based workforce development hub run by the City Mission.

Like the youth, Palombo has big dreams for the bakery, which launched earlier this year.

She wants Cornerstone to have its own building, where classes are taught and goods sold, and a generation of youth can learn the skills Palombo’s mother once passed on to her.

But Palombo, and her students, are dead serious.

Cornerstone Bakery is part of a larger initiative, called Occupations Instead of Incarceration, that seeks to provide young people with skills that translate to work – meaningful, enterprising work.

“We want people to have more control of their livelihoods,” explained Walter Simpkins, executive director of Community Fathers, Inc., the Schenectady non-profit behind Cornerstone Bakery. “We want to teach them to be entrepreneurs. … When young people come into Cornerstone Bakery, they’re learning they have value.”

The Occupations Instead of Incarceration program also teaches landscaping and silk-screening and will soon offer classes in how to clean houses and commercial buildings. The courses are free. Simpkins described them as “programs of excellence” that will help young people “move to the next level.”

“We’re living in a time when our institutional structures are no longer meeting people where they are, and they’re holding people back from what they’re meant to become,” Simpkins said. “We’ve got to prepare our youth for this new world.”

I first learned about Community Fathers in 2019, when I wrote about the organization for The Daily Gazette, the Schenectady newspaper.

At that time, I focused on the group’s primary mission, teaching men to become better fathers, with the goal of strengthening the overall community. I sat in on support group meetings where men, most of them middle-aged, most of them recently incarcerated, spoke candidly about their struggles, feelings, hopes and fears.

Through Occupations Instead of Incarceration, Simpkins hopes to give young people the skills and structure needed to avoid getting to the point where they’re attending support groups like the one I visited.

In a city where the high school graduation rate typically lags behind other communities – in 2020, Schenectady posted a graduation rate of 74%, compared to a statewide rate of 84.8% – innovative programs that provide structure, support and a hands-on education are immensely valuable.

“If we’re going to change the mindset in the community, we’ve got to focus on our young people,” Simpkins said. “We’ve got to help them grow and flourish.”

It shouldn’t be overlooked that the Cornerstone Bakery class is a lot of fun, with students laughing, joking and occasionally breaking into song.

One student, Natasha Nivens, 17, learned about Cornerstone Bakery from a staff member at Northeast Parent & Child Society, where she attends high school and lives in a group home.

“I love to bake,” Nivens told me. “I’ve always had a dream of owning my own bakery.”

Most of the students in Palombo’s class say they want to become professional bakers, but there would still be plenty to be gained even if they didn’t.

Baking is a useful household skill, and Palombo dispenses a mix of practical advice and simple life-lessons with warmth and ease, mentioning the value of math in one breath and the importance of patience in another.

“The more you do it, the better you get at it,” she says, summing up her teaching philosophy. “My grandmother passed at 101, and the week before she died, she baked brownies.”

At the class I dropped in on, Palombo, who owns Sugar B’s Baked Goods and Catering, taught her students how to make cinnamon rolls. Ife’s rolls had a twist: raspberry filling instead of cinnamon.

“This smells so good, I’m going to cry,” Ife said, while admiring her work.

The kitchen did smell good – and the baked goods looked even better the next day, at the bakery’s booth outside Schenectady City Hall, nestled between stands with produce from Cornell Farm in Hoosick Falls and Maynard Farms in Ulster Park.

The youth attend the Greenmarket every Sunday, and they enjoy dealing with customers and selling their products, which gives them a sense of pride.

“It feels great to know that we made (this food) and people are loving it and coming back for more,” Nivens says.

“I’m learning about business so that when I start my own business I know how to interact with customers,” Ife says. “It’s fun. It’s a good way to spend time. … One girl is always like, ‘Do you have sweet potato pie?’ and last week we had it, and she was so happy.”

Before I left, I purchased two of the chocolate-cherry muffins I watched the students make.

They were delicious, and if I didn’t know any better, I would never have guessed that a small group of local teens produced such a tasty treat.

As I savored my muffin, it wasn’t hard to envision the institute Palombo and Simpkins spoke of becoming a reality, and generations of youth making Cornerstone a destination for those with a desire to learn and grow.