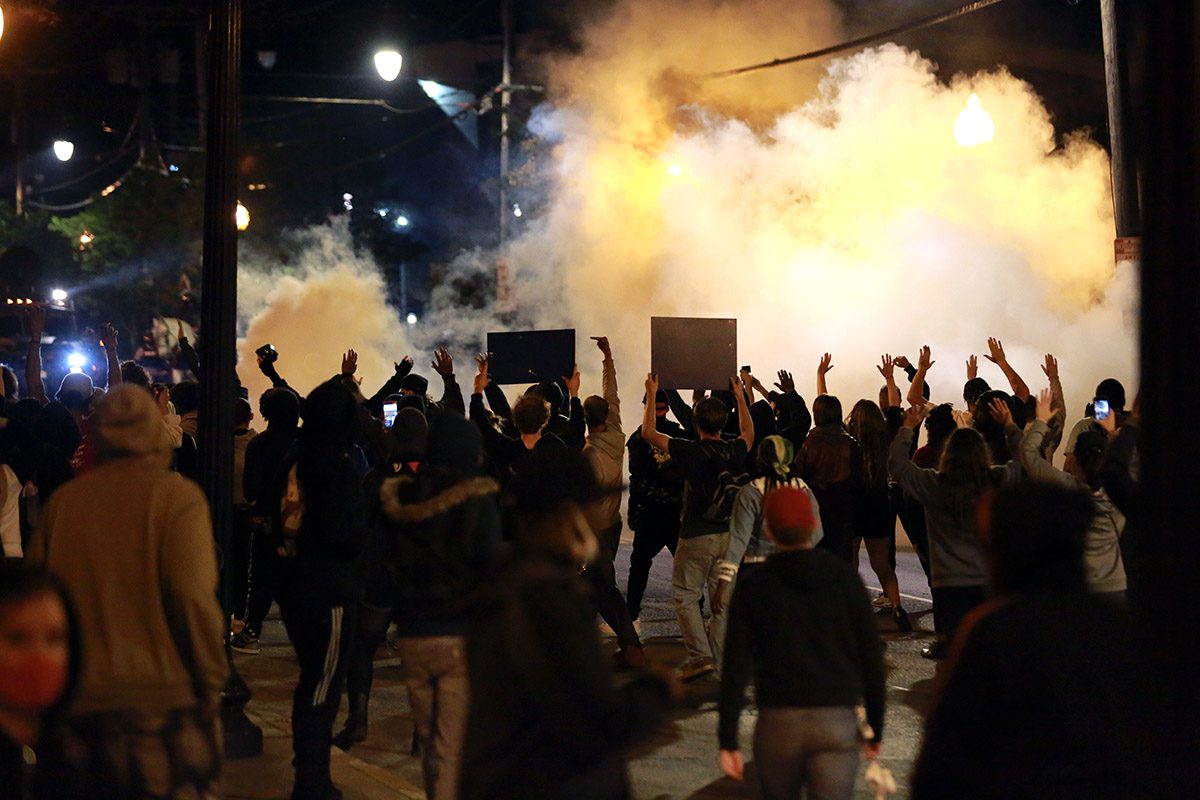 Tear gas has no place in Albany

“I’m in my house and I got gassed.”
“I live here. Did I have a choice?”
“I don’t think they would have used the gas if we were in another more affluent part of Albany.”

With little fanfare, the Albany Common Council voted down a ban on the use of tear gas and rubber bullets by city police last week, in effect dismissing the concerns of Albany residents who have experienced the effects of this dangerous chemical irritant first-hand.

For those of us hoping the Council would finally acknowledge the irreparable harm caused by deploying tear gas in residential neighborhoods, the long-delayed vote came as a cruel blow.

It was made all the crueler by the fact that it occurred at a remote meeting, with councilors logging in comfortably from their homes while members of the community gathered in front of a darkened City Hall to express support for the legislation.

The unusual circumstances of the vote, after months of passionate debate, might make it easy to forget what brought this issue before the Common Council in the first place: the pain and trauma of Albany residents tear-gassed in their own homes, or while on the street protesting or simply walking or standing outside.

Residents like 63-year-old Glynnis Marshall, who was watching a movie in her living room in Arbor Hill when the smell of tear gas first hit her. Her throat became scratchy, and her eyes began to burn. The street outside, she told Albany Proper, was a “complete fog.”

“There ought to be a law against it,” she said.

Marshall is right, which makes the Common Council’s failure to take action all the more galling.

Rather than seize the opportunity to protect city residents from a toxic and ultimately uncontrollable riot-control agent, eight members of the Council opted to side with a police department that has shown a shocking disregard for the well-being of Albany men, women and children when deploying a substance that can cause acute pain and have serious long term health consequences.

As the parent of a young boy, I’ve found the stories of tear gas creeping into the homes of sleeping Albany children during last summer’s chaotic – and occasionally violent – Black Lives Matters protests extremely disturbing.

And I wanted to see the Common Council take action to ensure residents would never have to experience anything like that again.

Those who oppose banning police use of tear gas claim it’s an effective and non-lethal tool for controlling violent crowds.

What they fail to mention is the incredible damage tear gas can cause.

It is indiscriminate in its effects, and has the potential to harm anyone in its vicinity.

Among other things, it can cause breathing difficulties, nausea, vomiting, irritation of the respiratory tract, chest pains, and increased blood pressure and heart rate upon initial contact. Prolonged exposure can cause blindness, chemical burns in the throat and lungs and respiratory failure leading to death.

According to the news site ProPublica, the most comprehensive studies of the health impacts of tear gas were conducted by the U.S. military on young recruits exposed to the chemical agent during training exercises.

“Afterward,” the article notes, “it left them at higher risk for contracting influenza, pneumonia, bronchitis and other respiratory illnesses.”

Tear gas is banned in wartime, and with good reason.

But there’s nothing stopping domestic police departments from using it, and footage of cops gassing protesters was distressingly common during the Black Lives Matters demonstrations of 2020.

The ubiquity of these images might lead one to conclude that tear gas is no big deal when, in fact, the opposite is true.

The unfortunate reality is that this is not a weapon that can be responsibly deployed, as the Albany residents gassed inside their own homes can attest to, and Council members who think otherwise are kidding themselves.

All that being said, there is reason for optimism.

A new Common Council will be seated in 2022, and one member who voted present on the tear gas legislation, Richard Conti of the sixth ward, will be replaced by Gabriella Romero, a vocal proponent of banning tear gas.

On Facebook, Romero has already announced her intention to push for a ban on tear gas, and one senses that this fight is far from over.

Which is good news.

Tear gas has no place in our community, and it’s time for the Common Council to do the right thing and take decisive action to ban it for good.