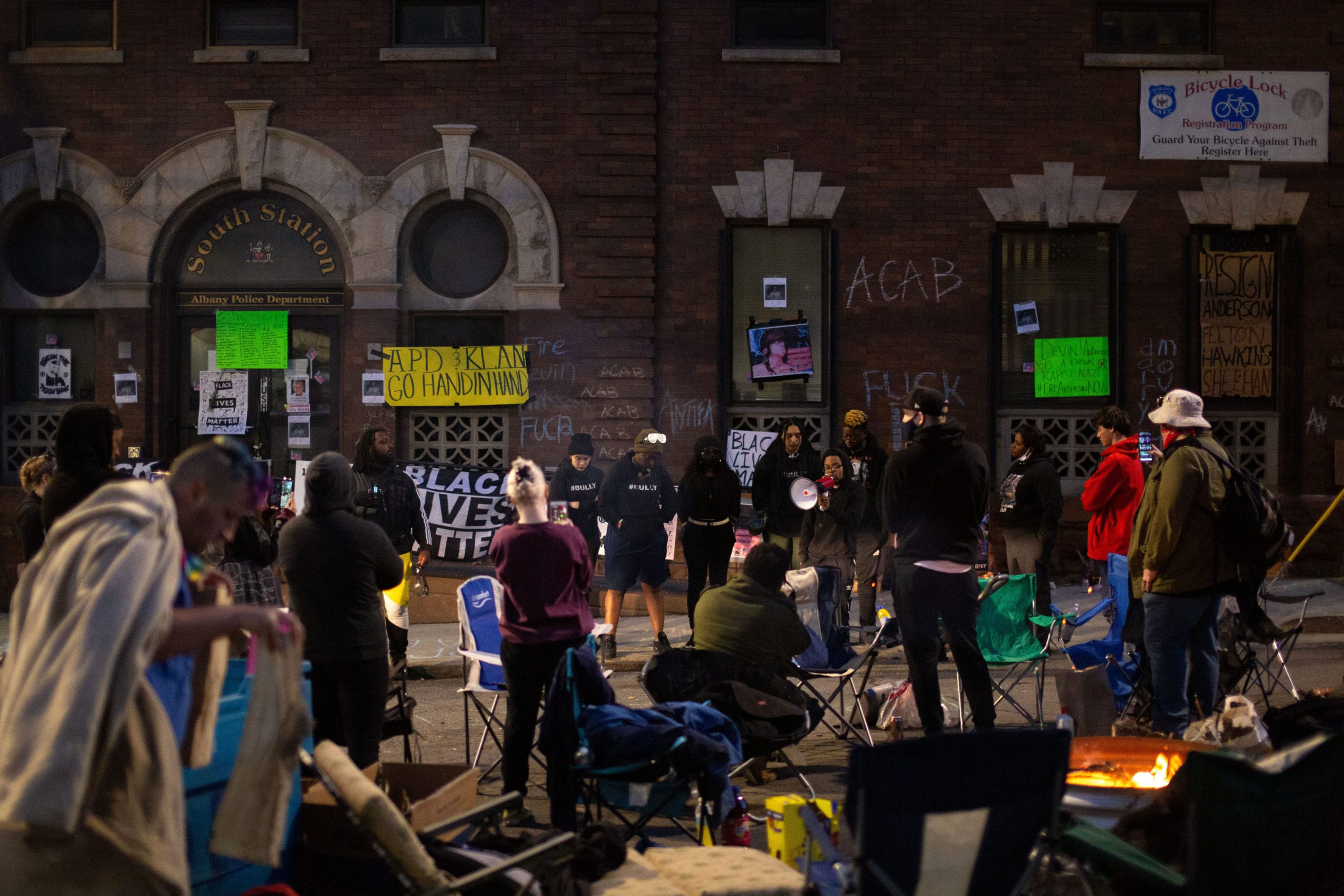 Two public meetings, one topic: the use of chemical weapons by Albany police

While the Albany Common Council was addressing legislation that would ban the use of tear gas by law enforcement, recently pepper-sprayed protesters were in their third night of occupying a street outside a downtown police station.

Protest organizers stood in front of South Station and one-by-one made remarks through multiple livestreams. The scene, which has grown with more tents each day, felt like a new era of a long-running Black Lives Matter movement– and speakers pointed out that it wasn’t even summer yet.

Their demands are mostly in response to police aggression caught on camera that resulted in the pepper-spraying of a crowd of protesters and a broken window at South Station last week — and the city’s response to the media since. It was a briefly chaotic moment that grew out of an earlier Black Lives Matter protest and march from Townsend Park.

The list included the firing of the lieutenant captured on video getting aggressive with protesters, the creation of a CPRB-led public database of all police disciplinary records in accordance with the repeal of 50-A, and a panel discussion between organizers and Mayor Kathy Sheehan and Chief Eric Hawkins to be livestreamed from the site of the protest.

Chandler Hickenbottom was among the organizers who spoke outside the station Monday night. She spoke into a megaphone, but not her own — her megaphone was forcefully confiscated by Lt. Devin Anderson, an event that escalated a tense situation and resulted in pepper spray and shoves from officers.

Mayor Sheehan apologized for earlier remarks comparing the protest to the deadly Capitol insurrection at the hands of white supremacists and election deniers. Protesters said they did not accept that apology and announced that they would not end their occupation until all their demands were met.

The Albany Police Officer’s Union put out a statement lambasting the mayor and chief for what they say is an occupying force that is jeopardizing officer safety.

“(The officers) had to watch as the group placed numerous backpacks around the outside of the station wondering ‘could one of those bags hold an improvised explosive device?’ Then they watched as the occupying force started fires in the street, wondering ‘is tonight the night this occupying force burns us out of our station?’”

There have been no reports of any violence during the three day long protest, where protesters have placed chairs around a portable campfire in the middle of the street, danced to music and ordered pizzas. Many community members have also stopped by to donate supplies — early Monday morning two white women, one old enough to require assistance walking, were among those who arrived with bags of food.

As the occupation played out in the street, a Common Council meeting was playing out online. One-by-one community members used an extended public comment period to express overwhelming support of a complete ban on tear gas. No one favored tear gas or a proposed amendment that would allow it to be deployed against rioters.

Albany resident Galen Heins posed a question to the council: “I think the broader question we should be asking is are we at war with our community?,” adding, “If we can persuade you now to ban tear gas, I have no confidence that you won’t replace it with something equally grotesque. That is why when we finish sorting out what weapons the police force are or aren’t allowed to use, we might want to shift the conversation and ask ourselves why are we turning weapons against our community in the first place?”

Many of the speakers referenced the two nights last summer that had Black Lives Matter protesters dodging tear gas grenades throughout crowded neighborhoods. Neighbors complained of gas seeping through their windows and filling their homes.

Gabriella Romero, who is currently running for the 6th Ward Common Council seat, was also among the dozens of speakers: “Haven’t you had time to discuss this enough? Haven’t people seen the violence that has occurred? I’m deeply and really troubled at the ‘what-if’s’ proposed by the city’s leadership in support of the use of tear gas.”

“This is your opportunity as the elected Common Council members to show that you actively listen to the community but that you’re also on the forefront of change and racial justice,” she added.

The entire meeting and public comment period is archived and available to watch on the Common Council Facebook page.

Albany resident Dora Fisher used a portion of her three minutes to recount walking to the recent Stop Asian Hate Rally with her 6-year-old son when she says he looked up at her and and said “Mom I’m so excited to go and stand up for our neighbors, but I’m afraid that the police are going to use that stuff that hurts your eyes.”

“What does that tell you when a six-year-old child is afraid of expressing his feelings and his opinions and wants to speak truth to power but is afraid of what the government is going to do to silence him?”

Council member Kelly Kimbrough, who said he received a lot of phone calls in support of his amendment, acknowledged the importance of a historic push for racial justice.

“I don’t think activists should let up or should stop fighting to move forward with things like this, but I think we need to have discussions,” he said. “I think the police need to be a part of this. I would say that’s the missing link.”

However, he acknowledged the lack of positive engagement between the police department and the Black Lives Matter movement. “I think the police need to step up and be a part and a partner of the community,” he said.

He also addressed critics who point to his former career as an Albany police officer as a bias.

“I was a police officer but I’m a Black man first… with all the scars, fears, experiences as any other Black man. I think people tend to forget that. Both mental and physical scars. There is a problem with policing. Racism does exist. There is systemic racism. All of that stuff is true and we need to address it. I think the moment we are in right now we are taking steps to make those changes,” Kimbrough said.

Before making a motion to adjourn, he asked an upset audience to stay tuned.